From Someone Who Knows About "Phony" Military Claims 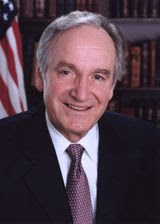 Oddly enough, the attempted smear of Rush Limbaugh by Congressional Democrats has resurrected another issue that actually begs further inquiry--the military record of Iowa Senator Tom Harkin.
Mr. Harkin has emerged as one of the Democrats' attack dogs on the Limbaugh controversy. After Senate Majority Leader Harry Reid blasted Rush for his "phony soldiers" remarks--completely distorting his factual reference to a genuine military fraud, Jesse McBeth--Senator Harkin chimed in, suggesting that Mr. Limbaugh was "on drugs again."
It's the kind of cheap shot we've come to expect from Mr. Harkin, who's no stranger at stretching or obliterating the truth to serve his own purposes. But, as Paul Mirengoff observes, Tom Harkin is an odd choice for an attack dog on the issue of military service, since his own record has undergone several "modifications" through the years.
This much we know: after college, Mr. Harkin served as a Navy pilot for five years in the 1960s, and remained in the naval reserve until 1988, retiring at the rank of Commander. But his actual duties as naval aviator have been "revised" over time, after evidence surfaced that disputed his original claims.
As both the Wall Street Journal and Glenn Reynolds have reported, Senator Harkin once claimed to have been a combat pilot in Vietnam. But Harkin's assertion changed rather quickly, when confronted with some inconvenient facts. As the Journal first noted in 1991:
In 1979, Mr. Harkin, then a congressman, participated in a round-table discussion arranged by the Congressional Vietnam Veterans' Caucus. "I spent five years as a Navy pilot, starting in November of 1962," Mr. Harkin said at that meeting, in words that were later quoted in a book, Changing of the Guard, by Washington Post political writer David Broder. "One year was in Vietnam. I was flying F-4s and F-8s on combat air patrols and photo-reconnaissance support missions. I did no bombing."
That clearly is not an accurate picture of his Navy service. Though Mr. Harkin stresses he is proud of his Navy record--"I put my ass on the line day after day"--he concedes now he never flew combat air patrols in Vietnam.
He was stationed at the U.S. Naval Air Station at Atsugi, Japan. Damaged aircraft were flown into Atsugi for repairs or sometimes flown out of Atsugi to the Philippines for more substantial work. Mr. Harkin says he and three other Navy pilots flew these ferry flights. And, when the planes had been repaired, he and his fellow pilots took them up on test flights. "I had always wanted to be a test pilot," he says. "It was damned demanding work."
While we don't expect the MSM will be asking Mr. Harkin any new questions about his naval service, there are still some unresolved issues about the senator's military career. And that's where we need the help of Vietnam-era naval aviators, to provide some answers to the following questions:
1) At one time, Senator Harkin claimed to have been dual-qualified in both F-8s and F-4s. In your experience, were any junior naval aviators of that period--including ferry pilots--qualified in more than one aircraft type?
2) Does anyone know the designation of the ferry "unit" to which Senator Harkin was assigned? Former commanders, XOs, etc? Were there other organizations of that type in naval aviation at the time? Where did they fall in the chain of command?
3) At the time, would ferry pilot have been considered a "backwater" job for a navy pilot, or one assigned to an aviator of lesser abilities? What were the assignment criteria for placing a pilot with a ferry unit, rather than a "line" squadron?
4) How would a young naval aviator--apparently fighter-qualified--avoid an assignment in a combat squadron at the height of the Vietnam War? Despite periodic bombing pauses over North Vietnam, this was time when losses of pilots and aircraft were mounting, prompting the AF to transition bomber and tanker pilots into F-4 cockpits. Given those losses, it seems odd that a Navy fighter pilot could spend at least five years on active duty (1962-1967), and never see combat.
5) We understand that the Navy doesn't share the Air Force custom of giving someone a medal at the end of each assignment. Still, how do you explain Harkin's meager decorations during his service as a pilot. Obviously, then-Lt. Harkin didn't qualify for Vietnam Service Medal or the Vietnam Campaign Ribbon, but how would you explain the lack of other decorations, like a Navy-Marine Corps Achievement Medal or Navy Commendation Medal? Both awards were established before Senator Harkin began his naval career, but available information suggest he did not receive either award for his service as a Navy pilot.
We would gladly appreciate thoughts/insight from any members of the naval aviation community, past and present.
Incidentally, the current version of Senator Harkin's on-line biography
barely describes his naval service, and makes no mention of Vietnam, or claims of combat experience.
Posted by Unknown at 9:22 AM

I too question Senator Harkin's credentials. While I was brown shoe navy (aviation side), I spent my time doing intelligence work. But I have never heard of any naval aviator not having squadron duty, especially during that time period. A cousin of mine was rushed into an active already deployed Marine Attack squadron (A-4s), with no squadron workup immediately after geting his wings. The reason: A shortage of junior officers.

The squadron COs and XOs would lead the raids in over the North and by the time the JGs got their shots, the AAA was lined up. They bore the brunt of the fire. So much for the heroics of leading the raid in.

I suspect Sen. was an Aviation Maintenence Officer, an Aviation Ground Officer designation and not a qualified Naval Aviator, from the description of his duty station at Atsugi.

Incidently, I am having a terrible time posting here. I have to reapply for a name and passwrd each time I post,. I am rejected when I use the same name and password a second time. The system doesn't remember me. Do others have the same problem?

If your cousin is still around (and on-line), I'd appreciate his thoughts on Harkin. Again, I'm ex-Air Force, and my aircrew experience came almost three decades after Vietnam, but there's something a bit fishy about his claims.

For example: the bulk of the acft retrieved/delivered by Harkin and his fellow "ferry" pilots were carrier based. Consequently, there ought to be something in the records about the number of traps logged by Harkin.

And, it's still amazing that Harkin dodged duty in a line squadron when the Navy and AF were losing scores of planes and pilots over North Vietnam.

One more note: in my AF experience, the only unit with a similar mission was an aircraft delivery group, based on the east coast in the 80s. The group was assigned to transfer F-16s and F-4s to U.S. bases overseas, and to foreign customers. But the group had a skeleton staff, and used line pilots for the flights. Had to imagine that the Navy didn't use a similar system back in the 60s.

Two items. First, the man wore the uniform and did the duty he was assigned. So, maybe he was a mediocre pilot. He still reported for duty and did what he was told. A 702 (how is that for an obscure old AF reference) is a valuable addition to the force.
Second, is accurately reflecting what his work was. If he actually was a 'ferry pilot', then get off his back and thank him for his service.

Senator Harkin claimed to have served in Vietnam and flew combat missions. He was outed initially by Barry Goldwater in the 1980’s. As a veteran, I will and did get on his back via correspondence for lying about his service and now having the gall to attack Mr. Limbaugh. If one is caught lying about something, it is wise to stay away from some controversy that involves a similar issue unless you want to condemn, in this case, phony soldier conduct based on your own experience. Otherwise, keep your mouth shut or face the consequences.

I wonder about the American electorate. If someone will lie about their military service, what does that say about their character and integrity? And the willingness of the voters to permit such a person to continue in public office, that really offends me. What can I say but that we traditionalists are much more easily offended when character and integrity issues surface than the average American.

Please leave Google ASAP. You will start to have a much better, or at least voluminous, response to your posts.

budman said: 'Second, is accurately reflecting what his work was. '

What part of lying about being a veteran pilot in Vietnam don't you understand?