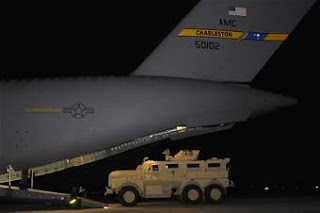 An MRAP vehicle being loaded onto a C-17 bound for Iraq. While the Air Force has transported hundreds of the mine-resistant vehicles to the war zone, airlift shortages have forced DoD to contract with Russian carriers for deliveries of other MRAPs (Official USAF photo).

I agree that USAF needs to come up with a viable solution to its strategic airlift capabilities (both in the short and long-term). But the cited GAO report for the "two major theaters war scenario" may reflect an outdated strategy - certainly something the last QDR addressed. Whatever the USAF comes up with, it needs to reflect something other than the Cold War OPLAN mentality (such as the "4-2-1" strategy suggested by the Bush administration and Secretary Rumsfeld).