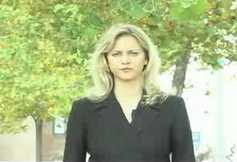 University of North Carolina graduate journalism student Carla Babb. Her report on John Edwards' upscale campaign headquarters earned the ire of the candidate's staff, who demanded that her segment be pulled from a student TV show (Raleigh News and Observer)

Perhaps we should expect this from a man who took a job at a hedge fund to "learn about poverty."
Senior staffers for former North Carolina Senator (and Democratic Presidential hopeful) John Edwards apparently pitched a fit last week, over a student journalist's report on the upscale location of the candidate's campaign headquarters near Raleigh.
That's right. Student journalist. Carla Babb, a graduate student at the UNC Chapel Hill journalism school, reported a segment on the Edwards campaign for Carolina Week, a student-run television program that airs on a local cable system. In her piece, Ms. Babb interviewed a fellow UNC student who is interning with the Edwards campaign, and a columnist for the student newspaper, who criticized the candidate for choosing a posh shopping center as his campaign headquarters.
According to Dr. C.A. Tuggle, the UNC journalism professor who serves as the program's faculty advisor, the segment prompted angry calls from two senior officials with the Edwards campaign, demanding that Babb's report be pulled from the program.
Tuggle told the Raleigh News and Observer that the Edwards campaign threatened to cut off access to Edwards for UNC student reporters and other student groups if the piece aired.
"My gosh, what are they thinking?" Tuggle said. "They're spending this much time and effort on a student newscast that has about 2,000 viewers? They're turning a molehill into a mountain."
Tuggle refused the campaign's demands, and said the video will air as scheduled today. Babb's report has also been posted on YouTube.
The dust-up over the student report (again) illustrates the absolute hypocrisy of Mr. Edwards and his handlers. Lest we forget, this is the man who claims to represent the nation's poor, but has, in recent years:
--Moved into a 25,000 square-foot mansion
--Ran off a neighbor who his wife described as a "rabid Republican"
--Made money through investments in a company that foreclosed on homes owned by victims of Hurricane Katrina, and (of course)
--Gained new insights into poverty through gainful employment at that hedge fund
And, speaking of hypocrisy, it's hardly surprising that national reporters took a pass on Mr. Edwards' fancy digs, leaving it up to student journalists to point out the latest contradiction between the candidate's deeds and rhetoric.
A salute to Ms. Babb for her honest reporting, and to James Edward Dillard, the UNC columnist who noted the disconnect between the self-styled "Poverty Candidate" and his upscale headquarters. We wish them well in their journalism careers, with the reminder that editors and news directors don't exactly applaud exposes of Democratic politicians.
As for Dr. Tuggle, he also deserves kudos for making the right call. We only hope he has tenure.
Posted by Unknown at 3:46 PM

I remember working for Goldwater in Portland in 1964. If you know Portland, his headquarters were across the street from what is now Jake's Crawfish and Chowder House. It was a semi-abandonded sales office for a former used car sales lot. Second floor, overlooking what had to have been the sales lot...but it was magic for me. Plenty of room for 8 foot long banquet tables covered in phones and phone books. I started working the phones. And, was so young, that I decided the best way to introduce myself was to "cross-dress". That's right, I went from Jim to Mrs. Smith that day. When you're ten years old it's easier to create the fiction of being a woman than to explain that you're a kid. Lol.

But, humble digs they were. And this in Oregon's premier city, which at the time was a Republican state. Put your money where it counts. Volunteers, real volunteers, are there for the cause, not the bennies.