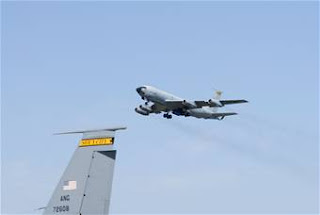 An Iowa Air National Guard KC-135E departs on its "retirement flight" earlier this year. Note the "7" in the tail number of the aircraft in the foreground; that indicates the jet rolled off the Boeing assembly line in 1957. The Air Force would like to retire many of its aging tankers and transports, but remains hindered by Congressional mandates (USAF photo).
Apparently, it's news to the Washington Post, but it's a topic we've been writing about for a number of months. In his weekly "Fine Print" column, national security writer Walter Pincus describes Air Force efforts to maintain aging aircraft that should be retired but can't--thanks to Congressional mandates. At one New Jersey base, he writes, a number of KC-135E tankers are no longer airworthy, so they're moved around the ramp for routine engine runs, and to keep the tires from going flat:
Once a week, at McGuire Air Force Base in New Jersey, a crew chief on a tug tows one of a dozen or more aging KC-135E flying tankers a short distance just to keep the tires from going flat. Every 25 to 30 days, each of the planes is taxied to a special spot just to sit while its engines run so that the aircraft can be kept on a congressionally mandated standby status.
Air Force Secretary Michael W. Wynne and Air Force Chief of Staff Gen. T. Michael Moseley bluntly told the House Armed Services Committee in a written statement last week that "the Eisenhower administration-era, KC-135Es, that have served our nation so well for 50 years, have exceeded available engineering data and we can no longer anticipate what element of the weapon system will fail next."
[snip]
But KC-135Es are not the only aircraft that Congress has prohibited the Air Force from retiring. Other language in law affects Lockheed's C-5A Galaxy giant transport, the C-130E Hercules light transport and other aircraft. Legislators are acting either to keep open Air Force bases in their districts or to continue contracts for the companies that make or rebuild the planes.
Congress in the fiscal 2004 budget prohibited the retirement of C-5As, which then numbered 111. Last year it legislated that the Air Force should try to update the older C-5As, but questions arose when the estimated cost surpassed $11 billion.
Meanwhile, Moseley said, "We can fly them [C-5As)] in America for outsized cargo locally. We would just not take them overseas." One result: When the Air Force needed to carry heavy cargo such as the new mine-resistant vehicle, known as MRAP, to Iraq, it rented Russian Antonov airplanes to help carry the load.
[snip]
Moseley and Wynne pointed out to the House panel that C-130Es average "more than 43 years old," and "more than 20% of them are grounded or have flight restrictions preventing them from being useful to the Air Force." In addition, Moseley said the commander at Ramstein Air Base in Germany said a C-130E there "is so broke we can't operate it and we have four so restricted that we can't lift any cargo other than the crew."
We detailed many of these problems last July, based on a lengthy article in Air Force magazine. The publication describes the current aircraft maintenance and age issues as "worse that the [infamous] hollow force of the Carter years, when the service was also hampered by old airframes and shortages of everything from spare parts to toilet paper.
Happily, we can report that today's Air Force lavatories are well-stocked, but problems of aging aircraft are far from resolved. And, as Mr. Pincus points out, Congress remains one of the biggest obstacles in addressing these issues, insisting that the service maintain obsolete or high-maintenance airframes, to preserve local defense dollars and the jobs they create.
According to the Post, at least one lawmaker is pushing to get rid of the Congressional restrictions. New Jersey Republican Jim Saxton--whose district includes McGuire AFB--believes that the Air Force should be able to get rid of old airplanes that it can no longer fly or fix. But Mr. Saxton also understands that he's fighting an uphill battle. We have those that would prohibit the Air Force here in Congress from doing anything about it by legislating that they must keep these old airplanes on the tarmac," he said last week.
Congressman Saxton didn't mention names, but some of "those in Congress" include Delaware Senator Tom Carper and Ted Kennedy of Massachusetts, who are strong supporters of the C-5A program. With C-5 bases in their states, both Mr. Carper and Mr. Kennedy are in favor of doing whatever it takes to keep the giant airlifters flying--even if planned upgrades are becoming too expensive.
Of course, there is also the issue of what the Air Force would do with the money if Congress capitulated and allowed the service to retire all of those old aircraft. The Air Force is lobbying for more F-22s, and it would like to extend production of the C-17 airlifter as well. However, the Raptor remains the service's #1 priority, with the C-17 falling lower on the acquisition totem pole. While we've long championed the F-22, we also understand the Air Force (and DoD as a whole) face a severe shortage of strategic airlift assets, needed to sustain global operations. Against that backdrop, it's becoming tougher to support the Raptor over the C-17.
Posted by Unknown at 2:04 PM