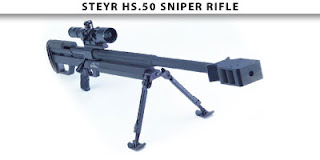 The Steyr HS.50 sniper rifle, which Iran has supplied to terrorists in Iraq--for use against our troops (STRATFOR).

USA Today is in a lather over the Pentagon's request for $1.4 billion in emergency spending, to deal with an "overstated" enemy sniper threat in Iraq. According to the paper, DoD asked for the money to deal with sniper attacks that have "quadrupled" over the past year, and could eclipse roadside bombs as the leading killer of U.S. troops.
However, the paper discovered that the rate of enemy sniper attacks has dropped slightly in 2007 and decreased dramatically over the past four months, based on data from military records. Confronted with that evidence, Pentagon officials have acknowledged a mistake, and promised to re-phrase the funding justification.
"The term quadrupled will be removed from the justification because it is simply incorrect," said Dave Patterson, deputy undersecretary of Defense.
But we're not ready to give USA Today a laurel for investigative journalism, or award the Pentagon a dart for playing fast-and-loose with the facts. The reality of the sniper threat is much more complex than the article--or DoD's mea culpa--would suggest.
First, let's examine the so-called "rate of attacks" cited by the paper. In 2007, the military reported 386 sniper attacks against coalition forces in Iraq, an average of just over one per day. Through 26 October of this year, there have been 269 sniper attacks, an average of less than one a day. But the paper also acknowledges that there has been a dramatic drop over the last four months--without acknowledging the apparent reason for the decrease, i.e., the troop surge (emphasis mine). Mistake #1.
USA Today's second error is failing to compute the surge's impact on the decrease in sniper attacks. Without the drop that occurred between July and October, what would the numbers look like? While it's highly unlikely that the difference would equal a four-fold increase, it is reasonable to assume that without the surge (and the recent drop in violence), the number of sniper attacks would be on pace with last year's total--or perhaps slightly higher. That would provide additional justification for sniper mitigation programs.
On the other hand, you can still make a strong case for those efforts, even if the surge has reduced the threat. As the budget estimate notes, snipers "have had an adverse psychological effect on both coalition forces and the Iraqi civilian populace." Effective snipers can pin down troops for hours, impede vehicle traffic, eliminate high value personnel, and terrorize civilian populations. Rooting them out often requires the allocation of significant resources. If you have any doubt about the impact of a single sniper on military operations, read one of the books on Gunnery Sergeant Carlos Hathcock, the legendary Marine sniper of the Vietnam era.
Beyond attack numbers, the sniper problem in Iraq is somewhat difficult to quantify. I've spoken with special forces types (current and former) who tend to downplay the threat, noting that many of the terrorist snipers seem to be poorly trained and have limited marksmanship skills. On the other hand, there are bad guys who have clearly mastered the sniper's art, as recounted in a recent post by the Danger Room's Noah Shachtman. During a visit to Iraq, Shachtman spent time with an American unit that was targeted by a proficient enemy sniper. As he recounts:
Last month, in the Iraqi town of Tarmiyah, I spent time with soldiers who'd been hit with roadside bombs -- and stalked by a professional-grade sniper. The explosives were treated as a fact of life; no one seemed to give 'em that much thought, even after a convoy was hit. But the sniper, he was different. He had killed two soldiers, and wounded seven more. And, as a result, soldiers in Tarmiyah were spooked to go outside, even for a few minutes. Just about the first war story anybody told me was about a close encounter with the shooter.
And, some of the enemy snipers have access to state-of-the-art weaponry, as reported by STRATFOR. A number of Steyr HS.50 sniper rifles were legally exported to Iran in 2006, and many of those wound up in Iraq. In fact, targeted raids by U.S. forces last February turned up at least 100 of the rifles, raising more concerns about an emerging sniper threat. However, the troop surge appears to have reduced that threat, by interdicting the safe havens and logistical networks that support enemy snipers.
The lessons of Iraq (and other conflicts) underscore the need to invest in anti-sniper technology and training, even if the number of attacks was over-stated. Future adversaries--think North Korea and China--would present a much more serious sniper threat. Both have long-established training programs, with plenty of well-trained snipers who are proficient in their deadly art. Tactics and technology developed from our experiences in Iraq could be easily applied to other conflicts, making that $1.4 billion a prudent investment.
Still, that doesn't excuse sloppy staff work, and DoD did the right thing by admitting the mistake, and changing their justification. But USA Today also owes its readers a more detailed explanation of the sniper threat and some of the reasoning behind DoD's proposed funding increase. While the Pentagon failed to accurately catalog the number of sniper incidents, the paper also came up short in explaining why the threat remains vexing, even if the number of attacks has dropped.
***
Oops, we almost forgot. One big reason the funding supplemental will survive is because a new, remotely-fired weapon (being purchased by the Army as a counter-sniper weapon) is produced in Johnstown, PA., home of Congressman "Mad Jack" Murtha, king of defense pork. However, in this case, it appears to be money well spent.
Posted by Unknown at 11:52 AM

your last link has nothing to do with the new anti-sniping weapon... love the post though

Jacob--good catch on the bad link; it has been fixed. Thanks/TFS

Sniper rifles were sold to Iran in 2004 by an Austiran company. You have the date listed as 2006.

The Telegraph had pretty good coverage of this when it came out back in Feb. It's not entirely clear when the raids actually took place.

But, I keep hearing that Iranian involvement in Iraq is just a "bush strawman" so, I just ignore news like this ;)

I suppose the most qualified people to catch a pro quality sniper would be one of our sniper teams. What a battle that would be. Our sniper team against some old Soviet trained lone wolf roaming around Tamiyah. I'd buy that book : see that movie :)
Training is the key and I don't think many insurgents are trainable to that degree in their current situation. I'd look for anyone ordering Sniper Elite for the XBox and having it shipped to Iraq or Iran.