With a Wink and a Nod 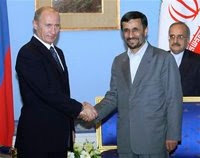 There's been no shortage of headlines from this week's meeting between Russian President Vladimir Putin and Iran's Mahmoud Ahmadinejad. First, there was talk of an possible assassination plot against the Russian leader, but he went ahead with the visit anyway. From our perspective, it sounded like a bit of disinformatizya, but Putin's decision to press ahead certainly reinforced his desired, tough-guy image.

Then, there was his announcement that countries in the Caspian Sea basin should not be used as staging areas for attacks on other nations in that region. It was a clearly veiled threat at potential U.S. action against Iran--and Azerbaijan, which has been mentioned as a possible forward base for American military forces operating against Tehran. Putin's declaration is, essentially, the latest iteration of Moscow's long-held belief that it should call the shots in the Caspian region, and control most of its vast oil reserves.

But the most critical aspect of Putin's talks with Ahmadinejad concerned Iran's nuclear ambitions. And, in that regard, many of the Russian president's comments were both predictable and dangerous, reaffirming Moscow's plans to fulfill contracts with Iran, and giving Tehran tacit approval to pursue its nuclear ambitions. On Tuesday, Mr. Putin said that Iran should be allowed to pursue its nuclear program for peaceful purposes--despite evidence that Tehran is trying to develop nuclear weapons. As CNN reported:

Putin said that he and the other leaders agreed that "peaceful nuclear activities must be allowed" in the region.

"The Iranians are cooperating with Russian nuclear agencies and the main objectives are peaceful objectives," he said.

Of course, the primary focus of that cooperation has been the nuclear reactor at Bushehr, and Putin's comments suggest that the project is moving forward, despite a recent impasse between Russia and Iran over missed payments. In an interview with the Islamic Republic News Agency (IRNA), Mr. Putin said there are "no political reasons" for the delay in completing the plant, and told reporters that Russia will "honor its undertaking" in the project. He also suggested that "outdated equipment" in the original, German design was the primary reason for the delay, and that the older hardware should be replaced.

While the equipment issue gives Russia a potential excuse for stretching out project completion, Putin's remarks seem to indicate that the Bushehr project is getting back on track--assuming, of course, that the payment problem has been resolved. And, we expect an announcement on that matter will be forthcoming. As noted in previous posts, the Bushehr reactor represents a multi-billion dollar investment for the Iranian government, and vast profits for the Russian construction firms that are completing the facility. The project is simply too important to simply abandon, or allow even longer delays in its construction.

Mr. Putin has invited Ahmadienjad to Moscow for another meeting in the near future, and that may provide the forum for a "final" announcement on completing the Bushehr reactor. Iran's nutjob-in-chief was certainly delighted by Putin's offer, and equally pleased by the comments of the Russian president. By issuing a warning to Iran's chief enemy (the United States), describing Iran's nuclear program as peaceful and recommitting his country to the Bushehr project, Vladimir Putin said everything Ahmadinejad could have hoped for--and then some.

Putin's remarks were the statecraft equivalent of a wink and a nod, letting Tehran know that Moscow will not oppose its nuclear ambitions, and it will not support calls for tougher sanctions against Iran. If the centrifuges at Esfahan are spinning a little bit faster today, it's because Iran just got the green light from its most important nuclear "partner."

Put another way: we've just inched a step closer toward military action against Tehran.
Posted by George Smiley at 2:22 PM