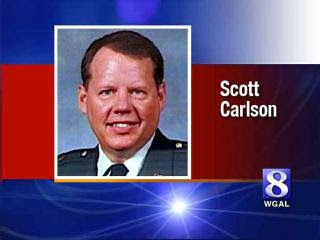 Army Colonel Scott Carlson. His "attempt" to weasel out of child support payments could end his military career, and result in prison time (WGAL-TV photo).

For any U.S. military officer, selection to attend one of the armed services' war colleges is an affirmation that you're on the career fast track, earmarked for bigger and better things. Review the biographies of current (and former) general officers, and you'll be hard-pressed to find one that didn't attend a war college program in residence. Each year's class at these schools (supposedly) represent the best and brightest, officers who will serve as the next generation of military leaders.
Colonel Scott Carlson and Lieutenant Colonel Bruce Atkins were members of last year's class at the Army War College, which is located at Carlisle Barracks, PA. However, their military careers are now in doubt, thanks to a little scam that Carlson and Atkins tried to pull off a few months ago.
According to WGAL-TV in Lancaster, PA., Colonel Carlson had a problem. A woman in Virginia was requesting an increase in child support payments for Carlson's nine-year-old daughter. Apparently, Carlson wanted to keep that situation secret from his wife and other children, so he hatched a plan that breathtakingly stupid. Last March, he went to the domestic relations office in Cumberland County, PA (where Carlisle Barracks is located) and denied paternity. Carlson was informed that he would have to submit a DNA sample to prove he wasn't the child's father.
Where does Lieutenant Colonel Atkins fit into the scheme? One month later, he showed up at the domestic relations office, presented Carlson's driver's license, and provided a DNA sample. However, staffers at the office sensed that something was wrong. According to District Attorney Dave Freed:
Personnel at domestic relations, after Atkins left, sort of in a sense looked at each other and said, 'That wasn't the same guy that came in (before),'" said Cumberland County District Attorney Dave Freed. "(The employees) went to a supervisor and that kicked off the investigation."
It didn't take for the scam to unravel. Along with the DNA sample, Atkins was required to provide fingerprints, which (obviously) did not match those of Colonel Carlson. Apparently, the two scheming officers forgot that fingerprints of all military personnel are on file, and can be readily accessed by federal, state and local authorities.
Both men now face a litany of charges that could end their military careers and send them to the slammer. Carlson is charged with fraud, tampering with or fabrication of physical evidence, tampering with public records, obstruction of the law, criminal conspiracy and solicitation, forgery, tampering and theft by deception. Atkins is charged with fraud, tampering with or fabrication of physical evidence, tampering with public records, obstruction of the law, criminal conspiracy, forgery, tampering and theft by deception.
But here's the kicker. The investigation (apparently) began well before the Army War College class graduated last June. And, if the Pennsylvania authorities followed normal procedures, it's quite probable that they notified commanders at Carlisle Barracks of the probe targeting Carlson and Atkins. Amazingly, both men were allowed to complete the program and move on to their next assignment. Carlson is currently stationed in Egypt; Atkins now serves at Fort McPherson in Atlanta.
Both Colonel Carlson and Lieutenant Colonel Atkins deserve whatever punishment comes their way. But there are also unanswered questions about how the Army handled this manner; if leadership at Carlisle was aware of the investigation--prior to graduation--it's simply unfathomable that they would allow Carlson and Atkins to complete the service's most prestigious military education program. If commanders at Carlisle learned of the inquiry before graduation, they should have removed the officers from the program, placed them in "casual" status and suspended scheduled moves until local officials completed their investigation.
Some enterprising reporter in Pennsylvania needs to ask the Army War College when it learned that Carlson and Atkins were targets of that local investigation. If the school didn't learn of the probe until after graduation, that's one thing--but that scenario also seems unlikely. Once Atkins provided the "phony" DNA sample for Carlson--and his fingerprints didn't match--local authorities essentially "had the goods" on the two Colonels. There was little reason for Cumberland County to keep the probe a secret. On the other hand, it's quite likely that local police and prosecutors asked for the military's assistance during the early stages of the investigation, to secure the "availability" of Colonel Carlson and Lieutenant Colonel Atkins.
Both men need to return their diplomas; they are unworthy of a school that lists John J. Pershing, Dwight D. Eisenhower and George Patton among its alumni. But the Army also needs to reveal when it first learned of the investigation, and if Carlson and Atkins were allowed to remain in the program, while under criminal investigation.
Posted by Unknown at 8:43 AM

hmmm, I thought people were innocent until proven guilty. This reporter already has the rope in the tree.

Atkins has confessed and is cooperating with authorities. While he colleague has not yet convinced, the presumption is large, as they say, that he is culpable, not least of which is because Atkins was in possession of his colleague's valid identification.

I think this post does have the chronology wrong, however. I think the father was already in Egypt when Atkins appeared at the county office. The crime was not complete until then.

People lets not miss the point here. Carlson and Atkins were at best boyish fools at worst complete idiots.

These men were both graduates of a Staff College, a very limited Boys Club, they would or have your sons, daughters, wives, husbands ( if servng under them) lives/careers in their hands on graduation.

They were given the chance to lead men, decide outcomes of battles etc and they pulled a stupid stunt like this.

Kevin, states innocent until guilty, hey man get real. These men knew exactly what they were doing, they were the best of the best, you do not get invited to eat at this table unless you are something special.

Bottom line is how much was Carlson looking to scam, how much has he given up. Of course this is if the Army takes the line he has paid for his crime in the civil courts, lets get him out the Army not waste any more tax payers money pay him his pension and say good ridence.

Perhaps this site and its viewers can keep tabs on the case and keep all us poor soldiers in the picture. God bless safe journey and take the high ground.

I know this is old but I just found this.

Grunt, until it's you who has been accused, then will you hope people will just dismiss you by saying "Get real." I knew LTC Atkins for a while and worked for him. I cannot attest to his innocence or guilt, but realize the former is presumed until the latter is proved.

Regardless of the criminal elements of this case. You have two senior field grade officers conducting themselves in a manor which brings the officer corps in a poor light. Is lacking in judgment and without honor.