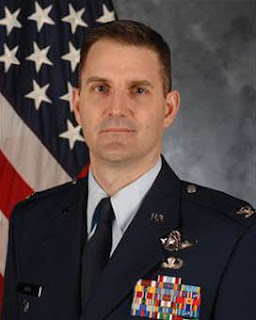 Colonel Paul G. Bell may just have the toughest job in the Air Force. In the wake of that highly-publicized nuclear "incident" at Minot AFB--which led to the dismissal of three senior officers on Friday--Colonel Bell has now been appointed to fix the mess at the 5th Bomb Wing, and sooner, rather than later.
Bell appears to have the requisite skills for the job. An Air Force Academy graduate and career B-52 pilot, Colonel Bell served in bomber units in California, Michigan and North Dakota as he rose through the ranks, becoming Vice-Commander of the 5th Bomb Wing (BMW) at Minot in July 2006. His "continuity" at the base was likely a factor in his promotion; the Air Force brass believes that Bell knows the organization well enough to implement corrective measures quickly, while a new commander would need time to "learn" the unit and its personnel.
The magnitude of Bell's task cannot be understated. That accidental transfer of six nuclear-tipped cruise missiles during a B-52 flight from Minot to Barksdale AFB, Louisiana has been described as the most serious breach of nuclear safety protocols in more than 40 years. According to some estimates, the warheads were officially "unaccounted for" during a 36-hour period, spanning their removal from a bunker at Minot, the flight to Barksdale, and their belated discovery on a parking lot at the Louisiana base.
As a result of the incident, at least 70 airmen have been removed from the Personnel Reliability Program (PRP), making them ineligible to work on (or near) nuclear weapons, at least temporarily. Additionally, the Air Force indicates that the 5th Bomb Wing has been "de-certified" for portions of its wartime mission, meaning the organization cannot be tasked for certain operations until the problems are fixed.
During Friday's press conference on the nuclear mishap, senior Air Force officials didn't mince words in describing the gravity of the situation:
“This was an unacceptable mistake and a clear deviation from our exacting standards,” said Secretary of the Air Force Michael Wynne, who led off the press briefing. “We hold ourselves accountable to the American people and want to ensure proper corrective action is taken.”
Maj. Gen. Richard Newton, the Air Force deputy chief of staff for operations, said Friday that adherence to weapons-handling standards had become lax at Minot and Barksdale.
Colonel Bell offered more muted criticism, calling the incident “a rare mistake and a breakdown in procedures” and saying he has confidence in the airmen at Minot Air Force Base. Those comments were not idle chatter; Bell understands that his officers and airmen are taking plenty of heat from all quarters and the last thing they need is a public, verbal barrage from the new wing commander. He realizes that such criticism might be viewed as hypocritical (after all, he was a part of the leadership team when the incident occurred); more importantly, Colonel Bell understands that one of the first steps in fixing the 5th BMW is creating a sense of unity. With his remarks, Colonel Bell made it clear that he's on the side of his troops--until they prove otherwise.
That's not to say the rebuilding job at Minot will be an exercise in sensitivity training--far from it. Having served in a unit that busted an Operational Readiness Inspection (ORI), we have some idea of what awaits members of the 5th Bomb Wing. Lots and lots of local exercises, focusing on the skills found deficient during the nuclear incident. The 5th BMW must pass another nuclear surety inspections (NSI) in the near future to regain its mission certification, so much of the training effort will be directed toward that goal.
But much of the inspection is also devoted to paperwork and administrative tasks, certifying that crews are cleared to work with nukes, and trained for their respective tasks. That task will be made more difficult by the recent removal of some Minot personnel for PRP. Ensuring that they can meet those standards--without simply pencil-whipping the forms--will be a major challenge. If those individuals can no longer meeting PRP standards, then the 5th BMW (and the Air Force personnel center) will face the job of locating qualified replacements and getting them to Minot.
But Colonel Bell's "to do" list doesn't end there. Returning the wing to full, mission-ready status will also require re certifying ground and air crews for nuclear tasking. For air crew personnel, that's normally an extended process, culminating in a week-long study, review and planning exercise that requires them to demonstrate their proficiency in performing a nuclear mission. As you might expect, the certification process is exacting, with no room for error. And, completing that task at Minot may be even tougher; with the wing officially decertified from nuclear tasking, the unit may have to bring in personnel from other bases to "re-certify" evaluators from the 5th BMW.
Finally, the timeline for completing these tasks is likely to be very short--probably no more than 120 days, at the most. From the Air Force's perspective, Minot's new wing commander knows the organization and what needs to be done, so it's now up to Colonel Bell to get his unit back on track. With tensions rising in the Middle East (and elsewhere), the nation can ill-afford to have a portion of its B-52 fleet unable to perform critical missions, due to the recent incident at Minot.
Colonel Bell will certainly earn his paycheck over the next few months. It's shaping up as a very busy winter at Minot AFB.
Posted by Unknown at 8:58 AM