Bears in the Air 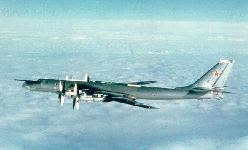 TU-95 Bear H long-range bomber.
Given the growing frequency of training flights by Russian TU-95 "Bear" bombers, that long-expected run against the U.S. east coast appears all be inevitable. At this point, it's not a matter of "if" the flight will occur, just only a question of "when."
This recent AP story from Alaska offers some idea of how often Russian bombers have been flying against U.S. and/or NATO airspace. According to a spokesman for the Alaska region of NORAD (North American Aerospace Defense Command), there have been seven flights by Russian long-range bombers against U.S. and Canadian airspace so far this year, the most since the cold war.
The most recent occurred about two weeks ago (19 Sep), when two Russian bombers approached NORAD's northern air defense boundary. At least five of the flights have been staged near the U.S. Aleutian Islands. In each case, approaching Russian bombers were met by American F-15s, or Canadian CF-18s. While the bomber sorties appear to be routine training missions, their growing frequency suggests a more assertive Russian military posture, as suggested in recent comments by Vladimir Putin. Increased flight activity by Bear and TU-160 Blackjack bombers followed Mr. Putin's vow to resume long-range training missions that would carry them near western airspace.
Having demonstrated their ability to stage periodic flights near Alaska, Norway, Great Britain and northern Canada, the Russians will likely set their sights on the most provocative mission of all, a flight along the U.S. eastern seaboard, just outside our air defense intercept zone. While Bear crews haven't flown that profile since the end of the Cold War, staging an "east coast run" would send a clear a signal about Mr. Putin's plans for the Russian military--and Moscow's increasingly chilly relations with the west.
At this point, no one is really sure why the Russians haven't resurrected their "east coast" profile. In the past, one or two "Bears" would launch from their base in central Russia and fly north to the Kola Peninsula. Leaving Russian territory north of Murmansk, the bombers would turn south, heading past Norway and through the Greenland-Iceland-U.K. (GIUK) Gap, before flying parallel to the U.S. eastern seaboard. The long-distance missions ended with a landing in Cuba, where the Bears would remain for a few days before returning home.
There is some speculation that shortages of aviation gas in Cuba may be preventing an "east coast" mission by TU-95s. However, there are also reports that Venezuela is meeting Cuba's energy needs, so reports of a "fuel shortage" may be overstated. A better explanation is that Mr. Putin is waiting for the "right moment" to stage the flight, ensuring maximum publicity for the mission and his more muscular defense policies. Other analysts suggest that Russia is waiting for the end of the Atlantic Hurricane season, to avoid having aircraft stranded or damaged by a storm threatening Cuba.
In any case, all signs still point to an "east coast" mission by Russian bombers before the end of the year. The good news, of course, is that the mission will not come as a surprise, and the Bears will be escorted throughout their journey by Norwegian, British and U.S. fighters. Our "cueing" for these flights remains quite good, as evidenced by the intercept of Russian bombers--outside western airspace--on every long-distance mission attempted this year.
Posted by George Smiley at 9:04 AM

I'd bet your guess about hurricane season is correct. I've always thought those ancient crates are cool looking, whatever else they are. One wonders how many they really have that are flight-worthy, although they built enough to have endless spare parts.

The best thing we can do if/when it happens is to not publicize it at all.
Me, I'd say, "You want cold war tactics?" and then proceed to falsely report how we saved some of their aircrews after some of their planes developed problems from lack of parts and poor maintenance. Then offer to help them learn how to maintain their planes.
Ahhh, the good old days. :)

In the 40 years they've flown these missions, what's their accident rate?

And with a decade of inactivity, just what sort of shape are the former Soviet fleet of bombers.

Given Putan's ambition, reviving the ballistic submarine would've been the next step, except getting those babies back online would be even harder (probably cheaper and more practical to build new ones).

Hmmm, I mostly agree, Frank, except that it might be even more fun to make a ginormous joke of it. Besides greeting them properly with interceptors, how bout well-publicized "Welcome Mr. Bear" parties at bases up and down the coast ? They take themselves so seriously, I bet that'd drive the Russkies bonkers.

The f22's are there in alaska, it's funny the article didn't mention them. Hopefully they are doing a stealthy intercept and the russians and the press don't know they are there.

Do we really need to worry about these museum pieces? They make for fun reading, and they're they complete opposite of "stealth". It's like watching the Confederate Air Force trundle about in their B-17s. Recent reports suggest that the population of Russia is declining so fast, they won't be able to defend themselves in 20 years. If the Russians got into any large hassle with the West, they'd quickly start losing great chunks of their territory to China and Russia's muslim neighbors. They can't afford to start any big battles with the west. Meanwhile, America is being flooded with grateful new residents, many of whom are more than willing to join the armed forces. Never mind that our second language is Spanish - it's a lot better (and safer) than Chinese or Urdu.

BTW, el jefe, I love the idea of "Welcome, Mr.Bear" celebrations! Nothing makes the Russians crazier than impertinent westerners.

Note to Spook: Is there any way you can fix up the posting login security mess? It's the worst of any blog I've ever seen in that it takes six attempts to post, each with a different security obstacle.