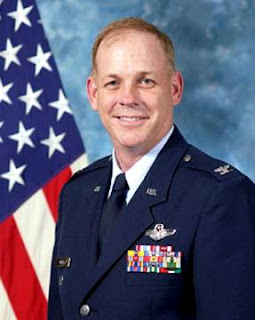 In a ceremony at Minot AFB on Thursday, Westa will take command of the troubled 5th Bomb Wing. The B-52 unit recently lost its certification for handling nuclear weapons after an errant flight on 29 August flight, when one of the giant bombers mistakenly ferried six nuclear-tipped cruise missiles to Barksdale AFB, Louisiana. A six-week Air Force investigation found serious problems in weapons handling and safety protocols.

As a result of the incident--described as the worst breach of nuclear weapons procedures in 40 years--the Air Force fired the 5th Bomb Wing Commander, Colonel Bruce Emig, along with the maintenance group commander and a munitions maintenance squadron commander. The service also dismissed the commander of the 2nd Operations Group at Barksdale. The aircraft and crew involved in the transfer were assigned to the Louisiana base.

At Minot, Colonel Westa takes over for Colonel Paul G. Bell, who had served as acting wing commander following Emig's dismissal. Bell will continue to serve as the 5th Bomb Wing Vice-Commander, a post he has held since July 2006.

Colonel Westa is also a career bomber pilot, most recently assigned as Vice-Commander of the 36th Wing, located at Andersen AFB, Guam. That wing serves as a host unit for CONUS-based aircraft, including heavy bombers, that deploy to the central Pacific region. A key installation for bomber operations during the Vietnam War, Andersen remains significant as a forward operating base, given its proximity to hotspots in northeast Asia and the South China Sea.

While the command transition at Minot was hardly unexpected, Air Force public affairs handled it in a clumsy manner. When Colonel Bell took over for Emig barely 10 days ago, information provided to the press suggested that he might remain in the job for an extended period, perhaps permanently. Stories from the Associated Press and Minot Daily News, based on accounts from the Minot PA office, did not identify Colonel Bell as an "acting" or "interim" Wing Commander, indicating that he might be Emig's permanent replacement.

Confusion over Bell's assignment status was the result of two factors. First, most members of the media don't understand the mechanics of replacing a wing commander who is suddenly relieved of his/her duties. Until a new commander can be assigned, the deputy or vice moves up and runs the unit on a temporary basis.

However, the Minot PA shop didn't help matters by taking a heads down/circle-the-wagons approach during the recent controversy. We contacted them after it became known that Colonel Emig had lost his job, and the Minot Public Affairs Office referred us to their counterparts at Air Combat Command. A spokesman at ACC expressed surprise at that move. "It's their wing commander," he told us, "Minot should know and they should put out the statement, not us."

As for Colonel Westa, he faces the dual tasks of getting Minot re-certified in its nuclear mission, and restoring scores of airmen to PRP status, which clears personnel to work with (or around) nuclear weapons. Since late August, more than 65 airmen of varying ranks--Lieutenant Colonel and below--have lost their PRP certification; most of them are reportedly assigned at Minot.

Air Force spokesmen have emphasized that there is no set "timetable" for re-certifying personnel or the bomb wing's nuclear mission. However, a couple of things seem certain. First, the timeline will be relatively short, due to mission constraints. Minot's bombers (and crews) are needed to support the nation's nuclear mission; until the 5th Wing can be recertified, other units will have to shoulder the load, and there are certain capabilities that can't be replicated outside the B-52 community.

There's also the matter of continuing the retirement of advanced cruise missiles--the weapons at the center of the Minot debacle. Until the wing is re-certified, Minot cannot send any additional cruise missiles to Barksdale for decommissioning. In theory, the 2nd Bomb Wing could send aircraft and ground crews to Minot and handle the job, but that would be an expensive proposition. The Air Force would prefer to see the 5th Bomb Wing get back on its feet, and resume its role in the transfer and retirement process.

Finally, the repair job at Minot will be carefully monitored, with absolutely no tolerance for pencil-whipping or cutting corners. The Air Force investigation found "an erosion of adherence to weapons-handling procedures at Minot" (no kidding), so the re-certification of personnel and the wing will be done strictly by the book. And, once the job is finished, look for Minot to get a visit from the ACC Inspector General Team undergo a nuclear surety inspection (NSI) as well.

Despite the absence of an official timeline, we're guessing that Colonel Westa will be given no more than six months to fix the 5th Wing and get ready for inspections. In today's operational environment, that's all the time the Air Force can give him.

We've said it before, and it bears repeating: This will be a very busy winter at Minot.
Posted by George Smiley at 8:58 AM

As a former Marine Corps NCO, I have to wonder if there's something wrong the nuclear surety inspection process itself.

A valid inspection process would give the inspecting organization an accurate picture of a unit's strengths and weaknesses. If the NSI process was valid, then there should have been some indication of trouble up ahead when the 5th BW was inspected in 2006.

Possible explanations for this discrepancy:

1. The 5th BW lied their (Biblical Beasts of Burden) off during the 2006 NSI. Perhaps they did--but a valid inspection process should (a) not rely on the inspectee's honesty and (b) should detect attempts to engage in dishonesty.

2. There was intense turnover immediately after the NSI. Possible. And that, in turn, would suggest that the USAF has some serious issues (if not a lifetime subscription or two) in personnel and force management.

3. There is a possibility NSI examines and measures the wrong things. I've seen this happen in safety inspections that focus on environmental and administrative details (hangar spaces clean, no gear adrift, hazardous material data sheets available for all items used by a given work center) to the exclusion of asking personnel to demonstrate (not just recite, but to do) the best practices for their jobs or for emergency procedures.

Ken--I think you raise valid concerns; as a unit-level spook, I was on PRP and served in nuclear-capable units, but my involvement with NSIs was on the periphery. So I really can't speak to the mechanics of what transpires when the inspectors are looking at forms, observing load crews, quizzing aircrews, etc.

On your first point, there is always a certain amount of "gaming" for any inspection, i.e., steering evaluators toward the strong points of your program, while minimizing the weaker aspects. That's not lying per se. However, a good inspector should be able to see through the smoke, and take a clear, honest look at the unit and its programs. If the AF can prove anyone lied to an inspector to cover up problems at Minot, that individual should be fired/disciplined immediately, and the inspector who was fooled needs to get the boot, too. No room for that sort of crap in the nuke business.

As for turnover, possible but not probable. It's up to unit commanders and the Air Force personnel system to prevent that sort of thing. If the Wing King, Maintenance Group CC or squadron commanders knew they were losing trained personnel at an unacceptable rate, it was up to them to start screaming and demand some relief.

Finally, I'll defer expert comment on your third point to the current/former nuke troops in the audience. I can say that the AF went through a period where they moved away from "compliance-based" inspections and implemented a more touchy-feely approach. In other words, if you can prove that the program is working, you don't necessarily have to follow the regs to the last letter. Obviously, that didn't work (it was part of our failed Total Quality Management AF), and the last I heard, the service had returned to a compliance-based approach. As for an NSI, I don't think you could ever do anything but a compliance-based eval for nuclear weapons programs.

Having said all that, I think there were several factors that led to the debacle at Minot, including:

A) New Commanders. Both the fired Wing King and Maintenance Group CCs had been on the job for less than three months. I don't care how sharp you are, a commander at that point in their tour is still getting the lay of the land--obvious problems may not be apparent, particularly if you've got a weak staff.

B) Other priorities--Put this in the RUMINT category, but I've heard that the Maintenance Group Commander (a woman) was heavily involved in various "Women in the Military" functions/related activities. If you're focusing on that stuff, you're losing the bubble, particularly as a newly-assigned commander.

C) Training. Another source at Minot tells me that the superintendent (E-9) on the maintenance group is weak, and didn't pay enough attention to training. Another example of taking your eye off the ball, and the disasterous consequences that arise.

D) Former Wing Commander. As you indicate, he was the man that led the wing through successful inspections in 2006. Not long after that, he announced his plans to retire from the Air Force, and did so after his change-of-command in June. Having passed the final tests of his career, did he "throttle back" and allow the command climate to deteriorate. Whatever your rank, when you're suddenly looking at retirement, other issues (including your job) often take a back seat. I'm not saying the former commander didn't do his job--based on the inspection reports, he did. But, if he throttled back over the final months of his tour, maybe the wing did, too, and we know what happened.

It would be fascinating to read the full AF report on the Minot incident, and the independent assessment (prepared by retired AF General Larry Welch) due out sometime next year.

Not only does this guy have a hard task ahead of him, but he is being transferred from Guam to Morth Dakota just in time for winter...

Why not Minot? Indeed...