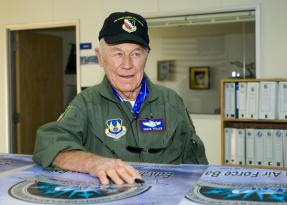 Sixty years ago yesterday, an unusual sound echoed across the skies of Southern California's high desert. High above the dry lake bed runway of Muroc Field--later renamed Edwards AFB --the Bell X-1 became the first manned aircraft to fly faster than the speed of sound, and produce that distinctive thundering sound, subsequently dubbed the sonic boom.
At the controls of the X-1 was Air Force Captain Chuck Yeager, whose exploits were later immortalized in the book and film The Right Stuff, and Yeager's own autobiography. While Yeager had been a legendary figure in aviation circles since his days as a P-51 fighter pilot in World War II, he was relatively unknown to the general public until Tom Wolfe (and Yeager himself) began to catalogue his extraordinary career.
Before The Right Stuff, Yeager's extraordinary accomplishments had been somewhat eclipsed by the U.S. space program, which made heroes of the early astronauts. Yeager and his fellow test pilots derided them as "spam in a can," noting that while the astronauts were essentially "along for the ride," test pilots were actually in control of their experimental aircraft and rocket planes. One of the final sequences of the film version of The Right Stuff depicts Yeager narrowly escaping from an F-104 over Edwards, a vivid reminder of the dangers he faced as a test pilot. And that push to take aircraft past the sound barrier--to the edge of space--began on that October day in 1947.
Sadly, the Air Force Times article on the anniversary of Yeager's history-making flight omits a couple of important details, richly recounted in both The Right Stuff and Yeager. First, his selection for the flight was based largely on cost considerations. As an Air Force Captain, Yeager was making $283 a month at the time; civilian test pilots were demanding bonuses of more than $100,000 for the trans-sonic flight, believed by some to be an impossibility. Since Yeager would do the mission for his modest Captain's salary, he got the nod.
And, of course, there's the little matter of some broken ribs, suffered during a horse ride two nights before. Fearing that flight surgeons would ground him from the mission--and they would have--Yeager sought treatment from a local veterinarian, and told only his wife and fellow test pilot Jack Ridley about the injury. It was Ridley who, famously, rigged a broom handle that allowed Yeager to seal the hatch of the X-1 and make the historic flight, despite terrific pain from those broken ribs.
Six decades later, Chuck Yeager (who retired from the Air Force as a Brigadier General in 1975) is still an active pilot. Last month, he was at the controls of an F-16 that soared above Edwards and zoomed past Mach 1, producing that same sound that thundered across the desert 60 years earlier. Not bad for for a guy who retired from the Air Force 33 years ago, and will celebrate his 85th birthday next February. When it comes to The Right Stuff, Chuck Yeager still has it. In spades.
Posted by Unknown at 9:02 AM

Damn! Chuck Yaeger is 85 and still has a current Flight Medical Certificate? This 59 year old pilot's hat goes off to him. What a remarkable career and person!!!!