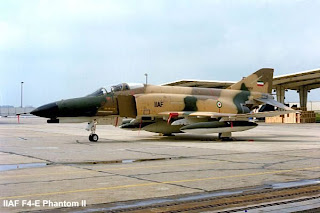 An Iranian F-4 Phantom, the likely candidate for any potential airstrike (read: suicide mission) against Israel.

I guess you're ignorant of the fact that Iran has long-range missiles, possible tipped with chemicals. Lots and lots of them.

Wrong--we've addressed Iran's missile force (in detail) during previous posts. The Iranian general referred specifically to his country's plans for an airstrike against Israel; this analysis shows that "plan" is little more than fantasy.

Read the article again then. Because that general (Alavi) refers to missiles, not just bombers. Unless they get taken out first, Iran's missile attack will make Hesbollah's seem like a gentle breeze by comparison.

David--read the last paragraph of the post; we address Iran's missile force--and we've discussed it in great detail in previous postings. A couple of points: as we noted the other day, Iran has less than 40 Shahab-3 airframes and probably no more than 18 BM-25s; the number of launchers for those missiles is even smaller, and that's the limiting factor in how many can be fired simultaneously.

In fact, no nation (or terror group) has an equal number of launchers and missiles. Mustering all available missiles that can hit Israel from Iran (plus their launchers), and factoring in launches from Syria and Iran, I still don't see how the Iranians can reach that magical "600" number. And, that doesn't accout for preemptive strikes by the IAF, either.