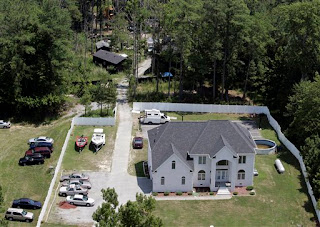 The former home of NFL quarterback Michael Vick near Smithfield, Virginia. Vick established his dog-fighting operation, "Bad Newz Kennels" on the property in 2002, long before the $750,000 house was built (AP photo via Breitbart)


Readers of this blog know that we're hardly fans of Michael "Ookie" Vick, the NFL quarterback who recently pleaded guilty to federal dog-fighting and conspiracy charges, and is now facing jail time. Vick, who has been suspended without pay by the Atlanta Falcons, will be sentenced in early December; most analysts believe he will receive at least a year in jail for his crimes.

If that prediction proves accurate, Vick's punishment will be relatively mild, given the barbarity of his actions. According to prosecutors, Mr. Vick was a key player in an interstate dog-fighting ring, and he personally executed animals that failed to perform, some by drowning and electrocution. And, once he finishes his expected prison sentence, Vick is expected to return to the NFL, although his days as a marquee player are probably over.

Given our record in the Vick case, you may be surprised to read that we don't think much of the state charges filed against the NFL quarterback and three of his co-defendants. On Monday, a grand jury in Sussex, Virginia returned indictments on charges of "beating or killing or causing dogs to fight other dogs and engaging in or promoting dogfighting." Surprisingly, the grand jury declined to indict Vick and the other men on eight counts of animal cruelty, which could have resulted in a 40-year prison sentence, if convicted.

Coming a month after Vick's guilty plea in federal court, the state charges strike us as the legal equivalent of piling on. And, more distressingly, the Virginia case appears aimed less at punishing offenders, and more of an effort at damage control by Gerald Poindexter, the Commonwealth's Attorney handling the prosecution.

The case began when authorities conducting a drug investigation of Vick's cousin raided the former Virginia Tech star's property in April and seized dozens of dogs, most of them pit bulls, and equipment commonly associated with dogfighting.

Six weeks later, with the local investigation perceived to be dragging and a search warrant allowed to expire, federal agents arrived with their own search warrants and started digging up dog carcasses buried days before the first raid.

Poindexter, widely criticized for the pace of the investigation, reacted angrily when the feds moved in, suggesting that Vick's celebrity was a draw, or that their pursuit of the case could have racial overtones. He later eased off those comments, saying the sides would simply be pursuing parallel investigations.

As the federal probe--led by U.S. Attorney Chuck Rosenberg--moved forward, Mr. Poindexter told reporters (in early June) that he didn't have a single investigative report in his file. And, it was no surprise that the local prosecutor took a pass on taking the case to the grand jury in July, missing an opportunity to file stage charges in concert with the federal case.

But the glacial pace of Poindexter's investigation--and his failure to secure state indictments on animal cruelty charges--is hardly a shock. Local media reports indicate that Mr. Poindexter has tried only one other dog-fighting case in his career, and (guess what) he lost it. There are also disturbing rumors that local law enforcement (and animal rights groups...hellooo, PETA) were tipped years ago about dog fights on Vick's property, but failed to act.

Poindexter's handling of the Vick case doesn't put him in the Mike Nifong category, but it does raise questions about his competence and judgment. Faced with compelling evidence of dog fighting and animal cruelty at a local celebrity's home, Poindexter responded with a pedestrian investigation, prompting Mr. Rosenberg to take the lead. Left in Mr. Poindexter's hands, we can only imagine where Vick investigation would be. Probably as dead and forgotten as those unfortunate animals uncovered on Michael Vick's former estate.
Posted by Unknown at 2:06 PM

Look's like Vicks problems got worse; the Royal Bank of Canada is suing him for default of loan. More here:

Oops, made a booboo: Here is link properly viewed: