Mr. Rather Goes to Court 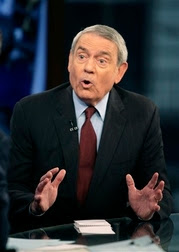 In the day's oddest legal development (this side of the O. circus), the AP is reporting that ex-CBS anchor Dan Rather is suing his former bosses for $70 million.

Mr. Rather alleges that CBS, its corporate parent Viacom and three former bosses "intentionally mishandled" the aftermath of his "discredited"--we would say ficticious--story about President Bush's service in the Texas Air National Guard. Rather is seeking $20 million in compensatory damages and $50 million in punitive damages. The lawsuit, filed in Manhattan, names Viacom CEO Sumner Redstone, CBS President Les Mooves and former CBS News President Andrew Heyward among the defendants.

The disgraced anchorman's motives seem clear enough, at least on the surface. Earlier this summer, Rather watched his old buddy Don Imus receive a $40 million settlement on his contract with CBS, after being fired for racially insensitive remarks about the Rutgers women's basketball team. Mr. Rather, who was pushed out the door when his contract expired in 2005, apparently sees an opportunity to pick up a little change, and regain some of his lost credibility.

But to do that, Mr. Rather is inviting a re-examination of the scandal that ruined his career. Within minutes of his report on the late, unlamented 60 Minutes II, bloggers proved that the documents used in Rather's "expose" were forgeries. A subsequent, detailed examination for CBS by former attorney general Richard Thornburgh and retired AP Chairman Louis Boccardi found no less than 10 serious defects in the preparation and reporting of the story, which alleged that Mr. Bush received preferential treatment in the Air Guard. While the Thornburgh-Boccardi panel stopped short of labeling the documents as phony, they raised serious questions about their authenticity.

Against that disgraceful backdrop, Rather and his lawyers are going to court, alleging that CBS kept him off the air after the scandal, in violation of his contract. For the record, Mr. Rather remained on the network's payroll--collecting a reported $13 million annual salary--for 18 months after the Bush report aired. Rather's producer, Mary Mapes, was terminated a year earlier, after Mr. Thornburgh and Mr. Boccardi completed their work, and three CBS News executives were forced to resign at the same time. By comparison, Rather got off easy; as far as we know, CBS security wasn't summoned to show him the door.

During his 44-year career at the network, Mr. Rather became known as the Cardinal Richelieu of CBS (a description reportedly coined by Bernard Goldberg). A consummate politician, Rather relentlessly played favorites and undercut those who opposed him. Goldberg incurred "The Dan's" wrath by penning that famous Wall Street Journal editorial that affirmed liberal bias in network news. Others--including his one-time co-anchor Connie Chung--were "knifed" simply because they posed a challenge to his position.

Some of Rather's former enemies still work at CBS News, and some may testify against him. But, more damningly, the network and its lawyers still have the Thornburgh-Boccardi Report, a 220-page indictment of irresponsible journalism, as practiced by Mr. Rather and his cronies. We're guessing that there's plenty of additional evidence that didn't make the report, but remains in possession of CBS and its legal department--ready for airing in the Rather lawsuit. No one at the network has said "bring it on" (at least publicly), but that's got to be the thinking at Black Rock.

And that brings us back to Dan Rather's decision to go to court. Already a wealthy man--he recently gave $2 million to his alma mater, Sam Houston State University--Mr. Rather apparently doesn't need the money. And, he risks more ridicule and humiliation by replaying the darkest moment of his long career. Yet, Mr. Rather is willing to endure that for lawsuit against his old employer and its top executives--a case that could be easily dismissed before it goes to trial.

Why go through all that in the twilight of your life and career? For the answer, we'll again turn to Bernard Goldberg, who knows all sides of "The Dan" as well as anyone. Mr. Goldberg once compared his former colleage to Richard Nixon, the president that Rather "stood up to" in that famous news conference. At the top of his profession, Goldberg opined, Dan Rather morphed into Richard Nixon, consumed by the same paranoia and hatred that doomed the former president.

Or, if you prefer a literary analogy, Mr. Rather appears to be the media equivalent of Captain Queeg, the villian of Herman Wouk's classic The Caine Mutiny. Judging from the outlines of the lawsuit, Mr. Rather seems to believe that the CBS suits conspired against him and prevented discovery of the truth, just like the mess hands who ate the strawberries on the fictional U.S.S. Caine.
Posted by Unknown at 4:18 PM

Mr Rather certainly knows how to play the game. I think this case is an opportunity to get some of the money and air time that will be flowing around the 2008 election. MoveOn or Al Gore will probably use him for something now that he's back in the news crusading against the corruption and lies in the .... oh, I just can't continue that sentence with a straight face.

I don't get it. They did not renew his contract. How is he going get any money for their alleged mishandling of the aftermath of his screw-up?

He also risks a courter-suit. His lack of professionalism seriously damaged the Tiffany Network's reputation and resulted in significant, quantifiable damages in lost advertising revenue.

Spook,
Mr. Rather needs to understand that he is not so different from a feminine hygiene product - see my post here

I Wanted to send you an email about that and another post of mine, but couldn't figure out how. So take a look at
">Behind the Scenes: Swift Boat Veterans vs. John Kerry (interview).