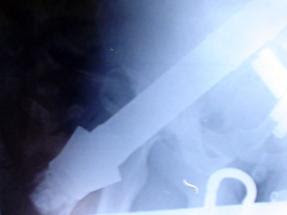 An X-ray image of the RPG impaled in the body of Army Specialist Channing Moss, taken at a forward medical facility in Afghanistan on 16 March 2006 (Maj Kevin Kirk via Army Times)

It sounds like something out of an episode of M*A*S*H; medics working frantically to save a wounded soldier with unexploded ordnance still in his body, keenly aware that the wrong move could be the last--for the patient and themselves.
But what happened in Afghanistan 18 months ago went far beyond a Hollywood script. Army Specialist Channing Moss was riding in a HUMVEE when his unit was ambushed by Taliban terrorists. As the firefight erupted, an RPG struck Moss's vehicle, impaling him. It didn't explode.
Over the hours that followed, Moss's buddies, Army medics, a MEDEVAC helicopter crew, EOD technicians and a surgeon named Major John Oh labored against the odds to save the soldier's life. During much of that time, the RPG remained in Moss's body, threatening him and those around him.
Gina Cavallaro of Army Times has the story of the incredible--and ultimately, successful effort--to save Specialist Moss.
Posted by Unknown at 10:31 AM

Duck--Thanks for the catch; link is now provided in the post. TFS

One of our SADF soldiers had a similar lucky escape as I recall during our Bush War.

This kind of story illustrates why a volunteer military is better than one that uses conscripts. The buddy system is the glue that binds our fighting forces and makes them a team. Any of you who have a friend who has come home from the mideast for medical reasons knows that they want to be back there because their buddies are still there. Because their buddies might need help.