How the Game is Played 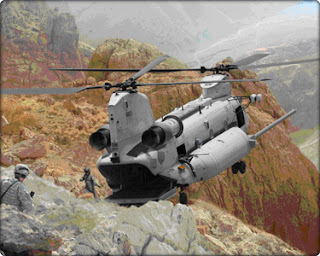 Artist's concept of the HH-47 in action (Boeing illustration)


An over-due hat tip to Sean Meade, web editor for Aviation Week's defense content, who always finds some of the best on-line military/technology articles, and provides links in his daily Frago. In today's edition, he offers an example of how the defense contracting game is played, especially when billions of dollars are on the line.

The example comes from a post at Steven Trimble's "Dew Line" blog, hosted by FlightGlobal.com. As Mr. Trimble explains:

I am posting here because I think's illustrative of the back-door manueverings of the CSAR-X bidders. I have received nearly as many unsolicited calls and emails from random "subject matter experts" as I've had on the CSAR-X program, and I don't think this is very helpful for the acquisition process. Here's the email:

Stephen, are you going to the Boeing presser today at 3:00 at the AFA conference?

If so, just wanted to pass this along - Boeing hasn't had to go on record to answer any of the following questions to date:

- Could Boeing have won CSAR if the Air Force had not made the one-word change of mission ready to flight ready?

- Which Air Force and Pentagon officials did Boeing meet with to get the KPP for air transportability changed?

- Boeing was unable to perform all of the tasks in its air transportability demonstration and instead it simply told the Air Force how it would do it if they won the competition. Which steps were simply explained to the Air Force rather than fully demonstrated. Where is the video tape of the demonstration?

For the record, there's nothing illegal about what the p.r. firm--or its client--is doing. And, if the tables were turned, Boeing might well use the same tactics. Still, we agree with Mr. Trimble's contention that this "back door" maneuvering is unhelpful in the acquisition process, for a couple of reasons.

First, the "whisper" campaign against Boeing's entry (the HH-47) will further poison a competition that has grown increasingly acrimonious over the past year. When the Boeing platform was selected as the Air Force's new CSAR platform last year, there were howls of protest from rivals Sikorsky and Lockheed-Martin--and Congressional delegations with ties to those firms. The "losing" firms filed formal protests, the Boeing proposal was eventually tossed out, and the contract was open for re-bidding.

Never mind that the Government Accountability Office (GAO) found only one of the two dozen protest points had any merit. And never mind that the protest process and requirement for new bids will further delay deliveries of the new helicopters. The Air Force has identified CSAR-X as its "second most-important" acquisition program--and for good reason. With the service increasingly tasked for a variety of "behind-the-lines" chopper missions (including the insertion of special ops teams), there's a clear need for a new helicopter that can perform that task, as well as the "traditional" CSAR mission.

Secondly, there's something particularly feckless about major defense contractors hinding behind the skirts of near-anonmyous public relations firms, hired to do their dirty work. If Lockheed or Sikorsky has questions about the Boeing entry, let them call a press conference or issue a media release and throw down the challenge. Once upon a time, defense contractors were willing to stand behind their claims and unafraid to challenge rivals. Those were the days when defense firms were run by visionaries, willing to bet everything on a new system that could not only beat the bad guys, it could also surpass anything offered by corporate competitors.

Sadly, those days are long past. In today's era of defense conglomerates, rivals on one contract are partners on another. No point in publicly antagonizing that other firm, particularly if you might need their help in another venture. And certainly, the CEOs of those defense contracting giants don't want to aggravate the competition's supporters in Congress. Afterall, those same Senators and Congressmen vote on other defense bills, providing funding for key programs that affect the corporate bottom line.

So, the competitors for CSAR-X will keep playing the shadow game in the run-up to the next Air Force announcement. Hire a few more p.r. flacks who can send an e-mail or make a call to their friends in the defense press (or the blogosphere), hoping that they will embarass their rivals at some public forum, like the annual Air Force Association (AFA) convention.

And, when the "next" winner is announced, there will probably be another round of protests, and more delays. Meanwhile, the Air Force is still waiting for its new rescue helicopter. We can only hope that today's "acquisition process," with its corporate maneuvering, political intrigue and legal wrangling, doesn't get someone killed in combat.
Posted by Unknown at 12:55 PM

thanks for the hat tip