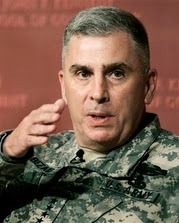 
When he was picked to lead U.S. Central Command in 2004, Army General John Abizaid was viewed as a natural for the post. The son of Lebanese immigrants, Abizaid was fluent in Arabic and had years of experience in the Middle East, qualities that were lacking in previous CENTCOM commanders.

But when General Abizaid retired earlier this year, many analysts viewed his performance as middling, at best. While he worked hard to improve bi-lateral ties with U.S. allies in the region, Abizaid's "mangement" of the Iraq War left much to be desired. The Al Qaida-led insurgency took root and grew steadily during his watch, culminating in the Samarra mosque bombing in 2006, pushing the country to the brink of all-out civil war.

In response, Abizaid and our senior commander in Iraq, General George Casey, pursued security operations that did not provide a constant U.S. presence in the nation's most troubled neighborhoods. The failure of that policy led to the current--and much more successful--troop surge, which was implemented earlier this year, about the same time that Abizaid's retirement was announced.

Since leaving active duty, General Abizaid has given relatively few speechs and interviews. But his most recent remarks proved both stunning and revealing, suggesting that Abazaid's retirement was beneficial for all concerned. Speaking at the Center for Strategic and International Studies (CSIS) in Washington, Abizaid said that while every effort should be made to prevent Tehran from obtaining nuclear weapons, if that policy fails, the world could live with a nuclear-armed Iran.

Here are the general's own words, as reported by AP military writer Robert Burns:

"Iran is not a suicide nation," he said. "I mean, they may have some people in charge that don't appear to be rational, but I doubt that the Iranians intend to attack us with a nuclear weapon."

"I believe that we have the power to deter Iran, should it become nuclear," he said, referring to the theory that Iran would not risk a catastrophic retaliatory strike by using a nuclear weapon against the United States.

He stressed that he was expressing his personal opinion and that none of his remarks were based on his previous experience with U.S. contingency plans for potential military action against Iran.

General Abizaid suggested that many in Iran--perhaps even members of the current regime--are open to cooperating with the West. According to the AP, the thrust of his remarks was a call for patience in dealing with Iran.

"I believe the United States, with our great military power, can contain Iran — that the United States can deliver clear messages to the Iranians that makes it clear to them that while they may develop one or two nuclear weapons they'll never be able to compete with us in our true military might and power," he said.

"We need to press the international community as hard as we possibly can, and the Iranians, to cease and desist on the development of a nuclear weapon and we should not preclude any option that we may have to deal with it," he said. He then added his remark about finding ways to live with a nuclear-armed Iran.

While we certainly respect General Abizaid for his years of military service, there are a number of obvious--and dangerous--fallacies in his argument. Let's begin with his comparison of a nuclear-armed Iran to other nuclear powers. While the U.S. spent billions to deter the nuclear might of the former Soviet Union (and to a lesser extent, the PRC), both were viewed as rational actors on the world stage.

In other words, there was little worry about Moscow or Beijing giving nuclear weapons to their client states, or terrorist organizations. The Russians and the Chinese understood the potential consequences of such actions, and under the old, bi-lateral world order, both the Soviets and the Chinese retained firm control of their nuclear arsenals. Concerns about the unauthorized transfer of Russian nuclear material (and expertise) didn't surface until the early 1990s, as the nation began its rocky transition from communism to democracy.

By comparison, Iran shows no such restraints. Less than two weeks ago, Israeli jet fighters struck a suspected Syrian nuclear complex near the Iraqi border--a facility that was reportedly financed by Tehran, and staffed by North Korean scientists and technicians. According to Israeli intelligence, the complex had recently received a shipment of nuclear materials (if not a finished weapon) from North Korea, a transfer likely financed by the Iranians. Some analysts believe the operation was aimed at producing a nuclear warhead for Syria's SCUD missiles, which can target Israel--or U.S. forces in Iraq.

And, of course, Iran has its own, "indigenous" nuclear program that will produce a weapon within 2-10 years, depending on the estimate you choose to believe. Once Tehran joins the nuclear club, there are justifiably grave concerns that it will share its expertise with its allies and terrorist organizations. Imagine how nuclear-tipped Hizballah rockets, based in southern Lebanon, would affect the regional balance-of-power.

The rational inhibitions that limited the Soviet Union's nuclear ambitions clearly don't apply to Iran, a nation that is committed to the destruction of Israel, and driving the U.S. from the Middle East. It's a country whose president is anxiously awaiting the return of the mystical "12th Iman" and welcomes the chaos that (supposedly) foretells his reappearance. According to some reports, the Iranian regime is preparing a new highway in Tehran for the Iman to use after his return. Funny, but we don't remember Kruschev building a freeway in Moscow to welcome back Lenin's ghost. There may be "rational actors" in Iran, but they're not in charge right now.

We're also a bit disturbed by General Abizaid's assertions that we can "contain" Iran, and that the international community can persuade Tehran to abandon its weapons program. Given the growth of Hizballah over the past two decades, its seems painfully obvious that our containment efforts are lacking. The same holds true for the "international front" against Iran. With the support of the U.S., the EU-3 (Britain, France and Germany) have spent three years in talks with Iran, aimed at curbing Tehran's nuclear ambitions. So far, those talks have not produced tangible results. More disturbingly, the Germans recently announced that they will not support new sanctions against Iran. At this point, prospects for a diplomatic solution appear bleak.

During the speech, General Abizaid carefully noted that the opinions expressed were his own, and did not reflect U.S. contingency plans for dealing with Iran. Additionally, Abizaid said the U.S. should "not preclude" any option for dealing with Tehran, including military action. But, as the AP noted, General Abizaid suggested a "more accomodating and hopeful stance" toward Iran, suggesting that Iran, over time, will move away from its anti-western stance.

Unfortunately, it's the same, forlorn hope that's been used for 20 years to support "engagement" policies toward Tehran. The result has been an increasingly beligerent Iranian regime that is actively pursuing nuclear weapons, exporting terrorism on a massive scale and establishing regional proxies to kill Americans and Israelis. No one wants a war with Iran, but it seems increasingly evident that military action may become necessary to deter Terhan's nuclear and regional ambitions. We simply can't tolerate a nuclear-armed Iran, and the idea that we can is both delusional and dangerous.

That's why General Abizaid's comments were so disturbing. We'd expect such Polly-annish rhetoric from the Council on Foreign Relations or the Brookings Institution. But from a former CENTCOM commander? If Abizaid's "take" on Iran is consistent with the counsel he gave as a senior military leader, then his recent retirement was a welcome development, indeed.
Posted by Unknown at 10:43 AM

Abizaid is one of many Generals who should have been fired a long time ago and wasn't. Being a good guy doesn't make you the right guy for a job.

Is the good general angling for a job in a Democratic administration, or something?

Yes, my first thought was that Abizaid wants to be SecDef in the (presumably) upcoming HRC administration.

Well written and thoughtful piece on General Abizaid. I caught some of his comments at CSIS on C-Span. I worry that he thinks in terms of "containment". If he had said "dominos" in the same sentence I'd have broken out in a sweat. Must be something they still think about at West Point. :-D