A little over a year after its war with Hizballah, Israel has apparently struck at weapons intended for the group, and Syrian military facilities used to support the delivery process.

Both CNN and the Jerusalem Post are reporting that last week's raid went far beyond an "accidental incursion" in Syrian airspace, as the event was originally described. Damascus claimed that its air defenses fired on Israeli fighters which entered northern Syria last Thursday. Spokesman for the Israeli Defense Forces have refused comment on the original report and on the details that have emerged in recent days.

"...Sources told CNN the military operation, which happened Wednesday into Thursday, may have also involved Israeli ground forces who directed the airstrike which "left a big hole in the desert" in Syria.

The strike may have targeted Hezbollah weapons coming into Syria or transiting through the country from Iran -- a pattern over the past three or four years which has occurred without any retaliation or action taken against it -- the sources said.

The Israeli government is very happy with the success of the operation, the sources said.

The Post has a copy of the graphic which shows the Syrian version of events, depicting a flight path that took Israeli jets across northern Lebanon and Syria before striking targets near the Iraqi border. 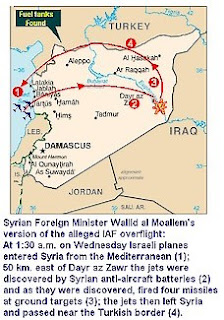 If that version of events is accurate, then Damascus should find it very disturbing, for a variety of reasons. First, take a look at this graphic, depicting operational Syrian Air Force bases (courtesy of the Dutch aviation magazine Scramble, a superb on-line resource).

If you believe the Syrian foreign minister, then the Israelis flew through the heart of his nation's air defenses--apparently undetected--to strike at targets near the country's eastern border. And it wouldn't be the first time that the IAF has accomplished such a feat; in 2003, Israeli jets struck a Palestinian terrorist complex near Damascus, taking advantage of confusion within the Syrian air defense system to bomb the target and escape, with no reaction from fighters or ground-based air defenses. The success of this particular raid suggests that despite a reported shake-up of the Syria's air defense organization, the system remains incapable of defeating an Israeli attack.

And, making matters worse, the IDF raid apparently included a ground attack, featuring commandos that were (presumably) ferried in by helicopter. While IAF CH-53 Sea Stallions have the range (540 NM) to reach distant targets, getting the chopper(s) and the commandos in and out of enemy territory was indeed an impressive feat. Apparently, the Syrians fared no better against the heliborne element of the mission than they did against the IAF jets. However, given the location of the target area--and initial Syrian comments about Israeli aircraft "coming out of Turkey," it's quite possible that the helicopters (and commando elements) staged from a "foreign" base.

As for their mission, some analysts might suggest that the Israeli ground teams were dispatched to "designate" the target for precision weapons dropped by Israeli fighters. But with all IAF F-16 and F-15I squadrons now JDAM capable, the need for laser designation has decreased. More than likely, the IDF commandos were on the ground for a secondary demolition mission, or (more likely) to kill or capture high-value assets.

In its coverage of the event, Time magazine suggests that the Israeli raid might be connected to the acquisition of Russian-made Pantsyr-1 air defense systems by Syria and Iran. Damascus took initial deliveries of the system in August, and Iranian crews are likely training on the Pantsyr as well. But the destruction of an air defense training site wouldn't account for that "big hole" in the desert. The attack was apparently concentrated in an area that's not far from known Syrian surface-to-surface missile facilities. Given the scope of the damage inflicted--and the apparent size of the Israeli strike force--we're guessing that the attack was aimed at more than air defense equipment.

In any case, it looks like Hizballah's order-of-battle will be missing a few items, at least temporarily. The raid was also a wake-up call for Damascus and Tehran, reminding them that the IDF can reach remote targets with air and ground forces. And finally, the strike illustrates that "Syrian Air Defense" is still an oxymoron, no matter how much hardware they buy from the Russians, or anyone else.

ADDENDUM: Last week's Israeli raid came six months after a former Iranian Revolutionary Guards Corps (IRGC) Commander, General Ali Reza Asghari, defected to the west. Media reporting suggests that General Asghari--who helped create Hizballah and was Iran's senior military official in Lebanon for years--is now in the United States, along with his family. But what are the odds that information from a former IRGC commander, a man with itimate knowledge of the Iran/Syria/Hizballah relationship, might have provided some information that prompted the IDF raid in eastern Syria?
Posted by Unknown at 1:54 PM

Essentially all of the information about this event has been provided by the Syrians so much of it is certainly some combination of wrong, lies, exaggeration and nonsense. One might argue, however, that if there were no basis to it at all then the Israelis would have denied it. The Syrians have made a series of claims about what happened but oddly have made no pictures available, which suggests they are hiding something.

If the alleged Israeli planes appeared on Syrian radar in eastern Syria how do the Syrians know the path they took to get there? Were Syrian jets scrambled to engage the Israeli jets once they were discovered? Is it really true that no one was injured and nothing was damaged on the ground?

If this event bears some semblance of appearance to what cnn is claiming then things may be looking up for the good guys. This, in combination with the snatch operation of a high level Hamas leader in Gaza last week, may be signaling that the new defense minister in Israel, Ehud Barak, has changed how the Israeli armed forces will act in the future. Many parts of the Israeli armed forces are certainly highly trained, highly motivated, and highly capable. Let's see if they can pull off some more significant actions in the future.

There is some chance that Syria will retaliate in some way for this event but it seems like they either keep doing what they've been doing, namely use proxies, or go for all-out war. The Israelis have in some way turned the tables on the Syrians. The Syrians like to use terrorism, which provokes Israel but not enough to make Israel start a war with Syria. In this case the Syrians have been provoked, and even humiliated, the one thing that Arabs can't stand, but they have no real recourse.

The elephant in the room is how Iranian weapons transit to eastern
Syria without crossing Iraq or Turkey?

If the weapons were destined for Hezbollah, then interdicting the shipment, even if it is on another country's territory, is permitted under clause 15 of UNSC 1701.

Lars--There are regular transport flights between Iran and Syria; It's relatively easy for the Iranians get permission to transit airspace through Turkey. The aircraft are probably flagged as "civilian" and the cargo manifests are either misleading or completely false. We ought to be leaning on the Turks to deny overflight by Iranian carriers, but without convincing proof of WMD cargoes, it's difficult for Ankara to deny use of their airspace, particularly when they count on Iran for cooperation on "other issues," namely the Kurds.

In a pinch, Iran could probably take the "long" route around the Arabian peninsula and up the Red Sea across the eastern Med, but (from what I'm told), that's typically not required.

'Keep Your Eyes on the Prize'

During last years 'Summer War' between Hezbollah and Israel I speculated that Israel would not be able to violate Iraqi air space. They would need a temporary air strip in the eastern Syrian dessert. Iranian nuclear facilities are in air sortie range from that part of the world. And, now it seems Turkey and Iraq might be a bit complicit - oh, my you mean you flew your bombers right over the border. We can't even decide who should patrol that damn thing, eh. Such confusion, eh...

By the way, your airbase map was what I was really looking for. Many thanks...