Bears on the Prowl (Again) 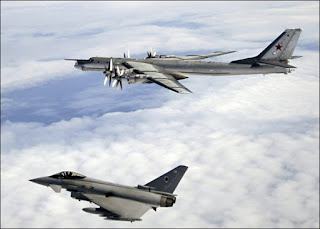 For the third time in less than a month, Norwegian and British fighters have been scrambled to intercept Russian bombers over the North Atlantic.
According to AFP, a pair of TU-160 Blackjack bombers were intercepted by Norwegian F-16s and British fighters today, as they flew near NATO airspace. The encounter came barely a week after eight TU-95 Bear bombers flew a similar profile, prompting another scramble by Norwegian and British jets.
A spokesman for the Norwegian MoD said the F-16s launched from Bodo AB, which is (typically) tasked for the intercept mission. The British fighters launched from RAF bases in northern Scotland, although the type of aircraft wasn't specified. Eurofighter Typhoons (pictured above) are replacing the older F3 Tornados in the air defense role. Last week's intercept was carried out by Tornados, while the new Typhoon handled a similar mission in August.
Today's bomber mission came as no surprise, given the recent increase in training activity by Russian strategic aviation--and Vladimir Putin's public pledge to resume such flights. So far this year, Russian bombers have flown multiple missions near Norway and Britain, with additional flights over the Arctic Ocean, and against U.S. defenses in Alaska and Guam.
While the TU-160 (Russia's equivalent of the B-1) is a much more advanced aircraft than the venerable "Bear," it has been seen less frequently on missions flown toward U.S. or European airspace. The Blackjack is less reliable than the TU-95 and more expensive to operate. However, with the recent spike in oil revenues, Moscow has been able to revive the TU-160 program, significantly increasing the number of flights by Blackjack crews.
We still believe that Russia is setting the stage for a bomber flight against the U.S. east coast, perhaps in a matter of weeks. The TU-95 is the odds-on favorite for that mission; with a maximum range of over 7,000 miles, the Bear is more than capable of shadowing the eastern seaboard before landing in Cuba, or (potentially Venezuela). A Blackjack flying the same profile would require extensive in-flight refueling from IL-78 Midas tankers--something that has never been observed on Russian bomber missions over the North Atlantic.
At last report, the Blackjacks were heading for home, so (apparently) the Russians won't try to take advantage of today's Air Force "safety day" to probe our air defenses. The service's Air Combat Command (ACC)--which "owns" CONUS-based air defense fighters--is using the day to review safety procedures, in wake of the recent accidental "transfer" of nuclear tipped cruise missiles from North Dakota to Louisiana.
But the Russians also understand that our air defense mission continues around-the-clock, 365 days a year. Flying an east coast mission during our safety standdown, a Russian Bear would get the same reception as any other day--an escort of F-15s and F-16s, with an AWACS and tankers providing support.
Posted by Unknown at 10:47 AM

Whatever else it might be, I think that Bear is a cool-looking airplane.

Are you sure that's a Typhoon?
Maybe it's the angle but it doesn't look right.

Assuming the Sovs, er, Russians do fly a mission against the U.S. east coast, what makes the most sense in terms of U.S. repsonse?

Let me correct myself..it is a Typhoon.
My eyes were reading Typhoon but my brain was reading Tornado.

Are these flights meant to depict a resurging Russian military capability - a counter to the U.S.'s deployment of the ballistic missile "shield" in former Soviet countries?

Or is it tied with Putin's recent political girations: dissolving of the government and appointment of dark horse ministers? With parliamentary and presidential elections just around the corner (both in the US and Russia), are these flights meant influence voters towards or away from particular candidates? Particular issues?

Even with a spike in oil revenues, how long can the Russian military infrastructure (maintenance, logistics, ops) continue such flights?

Putin is trying to revive a "nationalist" attitude in not only his Military but in the peons.

There are billions being made by Russia's newfound petrochemical sales and almost as much from the weapons sales to dozens of countries.

He has the money and he intends to continue controlling it even after he is just another KGB honcho. Which he has been for a long time, even if they did change their name.

The Russian Mafia is getting their cut, no doubt about it, but Putin is determined to hold most of the cards not only to control them, but to assure that Russia regains it's world stature and influance.

Actually, besides being a thug and a crook, he has Russia's best interests at heart.

He just doesn't care about the average Russian citizen unless it will cause problems in his plans.

Could this be some kind of diversion?

Russian planes (bombers, whatever) flying in international airspace. Ooooo, we're scared! Thanks Mr Spooky! With intelligence like that, we could use you in Washington, DC!

If you were really so "intelligent," you wouldn't be looking at Russia.

From a new reader: Where are these Bears staging from? I would assume they're from the 184th Heavy Bomber Aviation Regiment, out of Saratov. Are the old Soviet Naval Aviation bases in the Far North still in operation condition?