Fugitive on a Train 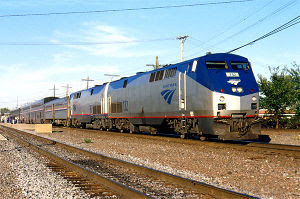 Amtrak's California Zephyr. Fugitive Democratic fund-raiser Norman Hsu was taken from the train when it passed through Grand Junction, Colorado on Thursday. Hsu is facing jail time on a 1992 grand theft conviction--and lots of questions about his recent fund-raising for the Democratic Party (Wikipedia photo).

It sounds like something from a Hitchcock movie, but fugitive Democratic fund-raiser Norman Hsu resurfaced on a train Thursday, two days after he skipped out on his bail hearing in California.
According to media reports, Mr. Hsu was arrested at a hospital in Grand Junction, Colorado last night. He was taken to the hospital earlier in the day, after "falling ill" on an Amtrak's California Zephyr train as it passed through town. Hsu was listed in fair condition at St. Mary's hospital early Friday; medical officials refused to discuss the nature of his illness, although Matt Drudge is raising the possibility of a suicide attempt.
As Democratic politicians scramble to return Hsu's contributions (or give them to charity), the saga of their former campaign "bundler" grows stranger by the hour. Facing jail time for a 15-year-old grand theft conviction, Mr. Hsu was due in a California courtroom on Wednesday, to surrender his passport and petition the judge to lower his $2 million dollar bail.
Hsu's attorneys told prosecutors that their client was scheduled to arrive at Oakland International Airport--on a charter flight--at 5:30 a.m. Wednesday, in preparation for his court appearance. When he failed to show up for court, the judge issued a warrant for arrest, and Hsu remained on the lam until he was arrested in Grand Junction, about eight hours after paramedics removed him from the train.
The MSM is noting the "similarities" between Hsu's latest disappearance and his 1992 flight to avoid prison on grand theft charges. But they're ignoring a lot of obvious--and unanswered--questions. Mr. Hsu's mode of travel for his trip to Oakland (charter jet) is pricey, to say the least, and beyond the reach of "mere mortal" fugitives. Why didn't Hsu head overseas, to a country that's unlikely to extradite him back to the United States. If Mr. Hsu could afford a charter, he probably has sufficient assets to finance a life in exile, at a comfortable location.
Instead, Hsu hopped a train, heading in the general direction of Chicago. So far, we haven't been told how the fugitive fund-raiser paid for the ticket, or his intended destination. Was he traveling under a phony name? Was he wearing a disguise, did he have a fake driver's license, and (a la O.J.) how much cash was he carrying? Why did it take hours for the feds to move in and make the arrest? By now, the FBI (and state authorities in Colorado and California) probably know answers to many of these questions, but oddly enough, the press doesn't appear interested.
One thing does appear certain. With his photograph plastered on newspaper pages all across America, it's doubtful that Mr. Hsu planned to "ride the rails" all the way to Chicago. With plenty of stops along the Zephyr's route between California and the Windy City, it would have been easy for Hsu to get off at a remote station and fade further into oblivion.
Even the suicide attempt sounds a little fishy. If Hsu wanted to end his life, he (presumably) had ample opportunities in the days and hours before he caught that train. Instead, the effort on the Zephyr--assuming it was a suicide attempt--seems half-hearted and confused, by a man who wasn't sure what to do next.
Unfortunately for Mr. Hsu, that decision has been made for him. When he's well enough to travel, Hsu will return to California and begin serving that long-delayed prison sentence. Meanwhile, the feds will get another chance to speak with him about his fund-raising activities, on behalf of Democratic luminaries that included Hillary Clinton and Barack Obama.
And that prospect is probably making Mr. Hsu--and some of his former beneficiaries--very nervous, indeed.
Posted by Unknown at 11:13 AM

Perhaps the San Mateo county prosecutor and judge will finally get their act together deny him bail this time?

Hitchcock, or the film "Silver Streak ?"

We are watching another chapter of Clinton lore unfold, this time a tale of yet another individual involved in a Clinton scandal where events begin to unfold under mysterious circumstances.

The lore is evident because too many average Americans assumed he was just as likely to reappear dead as alive.

El Jefe--Silver Streak was a funny film (with a pretty good cast), but given the intrigue surrounding Mr. Hsu, his journey, and the apparent effort to do him in, I prefer the Hitchcock analogy. However, given the "Clinton Connection" the Silver Streak" comparison works equally well.

Why would they deny him bail? Is he any more of a flight risk now than he was the last time he got bail?

The political connection looks like it is [movers and shakers in the Democratic party] which the Clintons are currently a member of.

If it is a PRC spook thing (and that is a big IF that I know very little about) then is there a contributor to the group [movers and shakers in the Republican party]?

Do you think Norman Hsu could be murdered en route to California? Or once he reaches California? He donated money to California Attorney General Jerry Brown, San Francisco Gavin Newsom (one of the first), SF DA Kamela Harris, SF Sup Angilina Alioto, Diane Finestein, Barbara Boxer, Kennedys, and other powerful politicians. If he was funneling money from China for political influence, favors, or SF Chinatown gangs for protection, his info could put many in jail ...