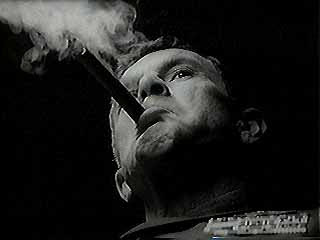 When the press reported last week's inadvertent "transfer" of six Air Force nuclear warheads from North Dakota to Louisiana, we started watching the clock. It was only a matter of time, we figured, before the left-wing fringe came up with a conspiracy theory to explain the "real reasons" behind the movement.
And sure enough, we have a winner. Just hours after the story broke, former CIA officer (and frequent Bush Administration critic) Larry Johnson weighed in with this theory at TPMCafe, guaranteed to titillate the Kos Kids and Moonbat Brigade.
According to Mr. Johnson and his "sources," the transfer of six nuclear-tipped advanced cruise missiles (ACMs) on that B-52 was no accident. Seems that we're "staging" nuclear weapons for The Next War With Iran. Cue the sinister music as he explains:
Why the hubbub over a B-52 taking off from a B-52 base in Minot, North Dakota and subsequently landing at a B-52 base in Barksdale, Louisiana? That’s like getting excited if you see a postal worker in uniform walking out of a post office. And how does someone watching a B-52 land identify the cruise missiles as nukes? It just does not make sense.
So I called a old friend and retired B-52 pilot and asked him. What he told me offers one compelling case of circumstantial evidence. My buddy, let’s call him Jack D. Ripper, reminded me that the only times you put weapons on a plane is when they are on alert or if you are tasked to move the weapons to a specific site.
Then he told me something I had not heard before.
Barksdale Air Force Base is being used as a jumping off point for Middle East operations. Gee, why would we want cruise missile nukes at Barksdale Air Force Base. Can’t imagine we would need to use them in Iraq. Why would we want to preposition nuclear weapons at a base conducting Middle East operations?
His final point was to observe that someone on the inside obviously leaked the info that the planes were carrying nukes. A B-52 landing at Barksdale is a non-event. A B-52 landing with nukes. That is something else.
Sounds reasonable, right? After all, Barksdale was the launching point for long-distance "round-robin" B-52 missions flown during Operation Desert Storm and the air war against Serbia. If those diabolical Bushies are planning to hit Iran--and use nukes--why, it only makes sense to stockpile them at Barksdale.
Unfortunately for Mr. Johnson and his fellow theorists, their notion has more holes than that proverbial block of Swiss. Not only is the theory far-fetched, it becomes downright laughable, when analyzed in the context of military planning and current operations.
First, we must confess that Barksdale AFB is a "jumping off point" for Middle East operations. But so is Moody AFB, Georgia; Fort Drum, New York, Virginia's Norfolk Naval Station and any other DoD installation that deploys personnel, equipment and other resources to the Middle East. Barksdale's B-52s have been deploying to the region for years, but so have the F-15s from Langley, the F-16CJs from Shaw, KC-135s from MacDill, and scores of other aircraft (and crews) from other Air Force bases. Barksdale is no more of a staging base for the Middle East than any military installation supporting the GWOT.
Secondly, the idea of "prepositioning" nukes in Louisiana for a strike on Iran is equally preposterous. Moving the nuclear-tipped cruise missiles from Minot to Barksdale puts them only 1400 miles closer to their supposed targets. On a 30-hour round-robin mission, that's nothing--you might save a single tanker sortie and about 30,000 pounds of jet fuel. Besides, those long-distance, round-trip missions are largely for demonstration purposes. For an air campaign against Iran, the Buffs would be based much closer, at bases in the U.K. and Spain, and Diego Garcia, the British-controlled atoll in the Indian Ocean.
As for the "nuclear option," why move the ACMs from North Dakota when same weapons are available at Barksdale? The Louisiana base is home of the 2nd Bomb Wing, the largest unit of its type in the Air Force. Manned by active duty and reserve personnel, the 2nd Bomb Wing operates (and maintains) the bulk of our B-52 fleet. The same weapons available for Buffs at Minot are also available at Barksdale, presumably in even greater quantities.
And, it's a badly-kept secret that the U.S. maintains nuclear weapons at locations outside the United States. Assuming that we actually plan to attack Iran--and use nukes in the process--our strike options are not limited to the aircraft and weaponry at Barksdale AFB. Besides, why make a missile that's being phased out--the AGM-129--the centerpiece of projected strikes against Iran? A weapon facing imminent retirement (virtually all ACMs are expected to be decommissioned by 2008) is more difficult to operate and maintain, making it, potentially, less reliable in combat. Suffice it to say, we have lots of targeting options for Iran (and other adversaries) that don't involve a missile heading for the bone yard, and a bomber that rolled off the Boeing assembly line in 1962.
Finally, it's worth noting that a B-52 flight is a relatively inefficient way to "stage" or "preposition" nukes. You can cram many more weapons into the cargo bay of a C-5 or C-17, and move them with less chance of detection. We were once involved in the removal of tactical nukes from a location outside the CONUS and none of those weapons were transported by combat aircraft. Military Airlift Command (the forerunner of today's Air Mobility Command) C-141s did the job, quickly, quietly and efficiently.
But those considerations don't exactly square with the latest Moonbat conspiracy theory. We hate to disappoint the Kos crowd, but the reasons for the Minot snafu are rooted in training, leadership and accountability, not some neocon plot to "nuke" Tehran.
Posted by Unknown at 10:50 AM

Thank you for taking on the torrent of moonbattery that the Minot event generated.

6 airmen directly involved,, the piolets etc, have turned up dead & 1 is still missing.....