The Rush to Recertify 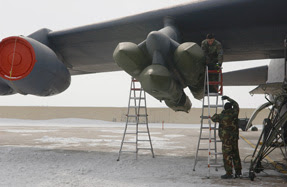 Advanced cruise missiles, mounted on the wing pylon of a B-52. These weapons--mistakenly carrying nuclear warheads--were at the center of a highly-publicized incident in late August that led to decertification of the 5th Bomb Wing in its nuclear mission (USAF photo via Air Force Times)

Last week, we predicted that Colonel Joel Westa, the new commander of the 5th Bomb Wing at Minot would be given "no more than six months" to fix the troubled unit and get it recertified for its nuclear mission.

Apparently, we were being charitable.

According to Colonel Westa, the wing is aiming to regain its certification by February, after passing a series of tough evaluations over the next three months. In preparation for the inspection, members of the 5th BMW are working weekends and receiving additional training, Westa told Air Force Times.

Westa said the inspections will include visits by a Blue Ribbon panel of Air Force officials to review weapons-handling procedures on base; a unit compliance inspection; and, most importantly, a nuclear surety inspection in January.

“The toughest inspections in the world are coming here over the next three months, there’s no doubt about that,” Westa said. He predicted that all the inspections will be finished by mid-February, bringing the wing "back up to full status."

"That's our goal right now," he told the Times.

The 5th BMW lost its nuclear certification in late August, after six nuclear-tipped cruise missiles, scheduled for decommissioning, were mistakenly transferred from the North Dakota base to Barksdale AFB, Louisiana on a B-52 bomber. The warheads were supposed to be removed from the missiles before the transfer flight, and making matters worse, the nukes weren't discovered until hours after the B-52 arrived at Barksdale. Experts described the episode as the worst breach of U.S. nuclear security procedures in more than 40 years.

Discovery of the transfer prompted an immediate Air Force investigation, which resulted in the firing of the 5th BMW Commander, Colonel Bruce Emig, along with a maintenance group commander and munitions maintenance squadron commander at Minot, and the removal of the 2nd Operations Group (OG) Commander at Barksdale. The operations group, part of Barksdale's 2nd Bomb Wing, "owned" the aircraft and crew that ferried the weapons from North Dakota to Louisiana.

In addition to the officers who lost their jobs, the Air Force also stripped Personnel Reliability Program (PR) certification from 65 airmen involved in the incident. PRP certification is required for all airmen who work with (or around) nuclear weapons.

Getting those personnel back on status may represent Colonel Westa's greatest challenge. We'll assume that most of the personnel who lost their PRP status were assigned to Minot. And, most of those removed from PRP are in specialties essential for any nuclear-capable unit: munitions technicians, load crews, aircraft maintainers and security specialists. Recertifying the wing dictates that Minot must have adequate numbers of trained personnel in those areas (and others), and they must be PRP-cleared.

So, a lot of that weekend training that's underway at Minot is aimed at getting key personnel back into the program. It's a given that everything is being done "by the book," given the scrutiny that the 5th Bomb Wing will face in the coming months. The unit can't afford to "pencil-whip" anyone; inspectors will come loaded for bear, looking for any sign that the bomb wing's problems haven't been fixed.

But the rush to get ready for upcoming inspections leaves a larger question unanswered: how many of the airmen who lost their certification should not have been cleared in the first place? Various experts we've spoken with suggest that PRP has been "broken" for years, with commanders certifying personnel with serious medical, financial, or conduct problems--issues that ordinarily disqualify them for nuclear weapons duty. One retired CMSgt, with years of experience in nuclear units, estimates that 25% of the personnel on PRP should not be certified.

That's a damning indictment, one that should give the Air Force pause. While getting the 5th Wing recertified is an operational priority, it should not come at the expense of related concerns, namely the management of PRP and adherence to program standards. In its first report on the incident, the Air Force noted a "widespread disregard for nuclear weapons safety standards by airmen at Minot and Barksdale."

Was that a reflection of problems within PRP? Officially, the Air Force hasn't addressed that issue, but there's enough anecdotal evidence (in our view) to warrant a full-scale review of how the program's being administered by the service. We're hoping that a second review of the nuclear incident, conducted by retired Air Force General Larry Welch, will tackle that concern.

We wish Col Westa well in his efforts to get the 5th BMW back on track. Both the task and the mandated timeline seem daunting, but Westa ( a career bomber pilot) is well-qualified for the challenges that lie ahead. We only hope that the rush to recertify the Minot unit doesn't obscure wider concerns about who should--and should not--work with the nation's most powerful weapons.

Posted by George Smiley at 9:09 AM

So, I've always been curious. What really happens to a base commander who gets fired? I have seen a rash of military firings lately (for incompetence, cover-ups, and at least one for criminal activity if convicted). Where do these people go? Do they vanish into logistics or something? Maybe supervising screw counters is apt punishment.......

JoeC said...
This comment has been removed by the author.
5:58 PM

Sorry for the double post. !@#$@%! google said I hadn't verified my email like I hadn't already done that a couple of months ago. Sigh..... If the admin would so kindly delete the duplicate, that would be appreciated.........

Joe--When a commander is "fired" he usually has two options (assuming they're not facing criminal prosecution). First, if he or she is eligible for retirement, they will be allowed to leave the service, and the process can often expedited.

On the other hand, a commander who has been dismissed can remain in service if he or she chooses, with the understanding that they will never be promoted, and their job options are severely limited. For example, someone like the fired Bomb Wing commander at Minot could wind up in a back-water staff job, perhaps as a division chief on a major command staff. In that position, the officer can continue his career, while preparing for eventual retirement and transition to a civilian career.

Incidentally, I have no idea regarding the career plans of the fired wing commander at Minot. He was commissioned in '85, but his time at the Air Force Academy counts toward retirement, so he could easily choose retirement, with 26 years of military service under his belt, if that's his preferred option.

One more note: in some cases, it's surprising how long a fired or disgraced officer will remain on active duty. You may remember Capt Jim Wang, the Air Force AWACS controller, the only man charged with criminal conduct in the shootdown of those Blackhawk helicopters over northern Iraq back in 1994. He was acquitted by a court martial in 1995 and elected to stay in service. Needless to say, he's never been promoted, so today, he's still a Captain, and still on active duty.