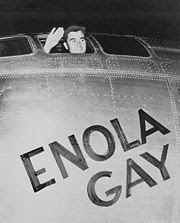 Then-Colonel Paul Tibbets, Jr. in the cockpit of the Enola Gay


Retired Air Force Brigadier General Paul Tibbets, who piloted the B-29 that dropped the first atomic bomb on Japan and hastened the end of World War II has died. He was 92.

Gerry Newhouse, a longtime friend of the family, said that General Tibbets passed away Thursday at his home in Columbus, Ohio. General Tibbets suffered from a variety of ailments, and Newhouse said his health had been in decline in recent months.

Tibbets requested no funeral and no headstone, fearing it would provide a protest site for his detractors, Newhouse said.

As a 30-year-old Air Force Colonel, Tibbets drew the assignment to drop the first atomic bomb on a Japanese city in August 1945, in hopes of ending the war. Barely one year earlier, he assumed command of the new, 509th Composite Group, then stationed at Wendover Field, Utah.

Tibbets was already a combat veteran when he took the reins of the 509th. He had served as a bomber squadron commander in Europe--leading the first B-17 mission over Europe in 1942--and flew combat missions in the Mediterranean Theater. Various accounts described Tibbets as the "best bomber pilot" in the Army Air Corps, and his outstanding record prompted his selection to lead the new unit.

Over the months that followed, Tibbets trained his unit for their nuclear mission, although details of the project remained highly classified. The specially-modified B-29s assigned to the 509th were built to Silverplate specifications, the first aircraft designed to carry nuclear weapons. The B-29s were assembled at a Glenn L. Martin Company plant in Omaha, Nebraska, then delivered to the group before it deployed to the Pacific.

Unlike "conventional" B-29s, the Silverplate models carried no defensive guns or extensive armor plating, and their multiple bomb bays were replaced with a single, 33-foot-long opening, designed to accomodate early nuclear weapons. Tibbets reportedly hand-picked the bombers for modification; he named his own Enola Gay, in honor of his mother.

At 2:45 a.m. (local time) on August 6, 1945, Tibbets was at the controls of the Enola Gay as it lifted off from the 509th's forward base on Tinian, in the Marianas Islands. Five-and-a-half hours later, Tibbets and his crew dropped their weapon, nicknamed "Little Boy" on the Japanese city of Hiroshima. The ensuring blast and fire killed an estimated 60,000 Japanese, including military personnel, civilians and a small number of allied POWs imprisoned in the city. Thousands of other Japanese died later, from the long-term effects of radiation exposure.

But the mission acheived its objective. After a second atomic bomb was dropped on Nagasaki three days later, Japan capitulated, averting the need for a U.S.-led invasion of the enemy homeland. By some estimates, that operation would have resulted in millions of American and Japanese casualties.

While the decision to use nuclear weapons on Japan grew controversial in the years that followed, General Tibbets--to his ever-lasting credit--expressed no regrets about the mission. As he told an reporter from the Columbus Dispatch two years ago:

“I knew when I got the assignment it was going to be an emotional thing,” Tibbets told the Columbus Dispatch for a story on Aug. 6, 2005, the 60th anniversary of the bomb. “We had feelings, but we had to put them in the background. We knew it was going to kill people right and left. But my one driving interest was to do the best job I could so that we could end the killing as quickly as possible.”

He expressed similar thoughts in a 1975 interview. He described the mission as "his patriotic duty--the right thing to do."

“You’ve got to take stock and assess the situation at that time. We were at war. ... You use anything at your disposal.”

He added: “I sleep clearly every night.”

Rest in peace, General Tibbets. You will rightfully be remembered as a warrior and a patriot, a man whose willingness to tackle the most difficult of assignments brought and end to a war--and spared millions of lives in the process.

However, it is regrettable that there will be no permanent tomb or headstone to mark the final resting spot of an American hero; unfortunately, those observations about your detractors are painfully correct. Thanks to seven decades of revisionist history and villification, the burial spot of the Enola Gay's pilot would become a gathering point for the kook fringe, lesser men (and women) with no appreciation for your service, rendered in the cause of freedom.

ADDENDUM: For a better appreciation of General Tibbets, the man, and his life, we highly recommend Bob Greene's book, Duty: A Father, His Son, And The Man Who Won The War. Mr. Greene, an Ohio native, met Paul Tibbets as his own father neared death in 1998. Greene's subsequent conversations--and friendship--with General Tibbets helped Greene understand what patriotism, courage and duty meant to members of the Greatest Generation--and what they should mean to all of us.
Posted by Unknown at 2:12 PM

A Good Man. We have the best country in the world, Thanks to him and many like him.

Building that squadron: assembling the organization, training the men, getting the equipment -- and working out a doctrine to drop the bomb was, the way I read it, all General Tibbetts' work. He did all the homework, and did it well -- and getting that bomb to target was the payoff.

God bless his memory: all the American soldiers who didn't have to die in Olympic or in Coronet (as well as their Japanese enemies-in-arms), not to mention the millions of Japanese civilians who didn't starve to death as the Home Islands slowly choked under naval blockade -- owe him their lives.

For what would have probably happened had the bomb not been used, and the invasions and blockade gone forward, see Richard Frank's Downfall which provides an excellent discussion of the decision to use the Bomb, and the alternatives.

For an excellent "what if" of the invasion, see David Westheimer's excellent old novel of the same title (if you can find a copy -- also published as Lighter Than a Feather which covers the Olympic side of things. Alfred Coppel wrote a similar novel The Burning Mountain about Coronet.

I was able to attend a talk by Gen. Tibbets at Hanscom AFB, Massachusetts several years ago.

He said that the 509th was designed to be split into two halves, one for the European theater, one for the Pacific. In the event, of course, that wasn't necessary.

Also, in-depth background checks were done on all the 509th's personnel. A surprising number turned out to have enlisted under a false name, to escape criminal records, including outstanding warrants. Tibbetts used the extraordinary authority given to him, to have those men's police records sent to him for the duration. He called each man in one by one and told them, "If you stay out of trouble and do your job, I'll burn this file."

At the end of the war, he called in each man again, gave him his file, a steel wastebasket, and a box of matches, and let the man burn the file before being mustered out.

He assumed an enormous responsibility in the cause of liberty. He should be commemorated and the kook fringe be damned!