Remember this sight as you're waiting in line at the airport, or sitting on the tarmac during your Thanksgiving weekend flight. From Bill Sweetman at Aviation Week's defense technology blog: 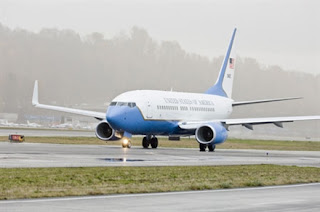 With exquisite timing, Boeing chooses a travel weekend that could go down in the annals of airborne horror to deliver a top-of-the-line Boeing Business Jet that will be assigned to Congress - those folks who have charged billions in air travel taxes over the decades and left us with 1930s blind-landing technology. The jet took off from Seattle this morning for its base at Scott AFB in Illinois.

The C-40C, jam-packed with 40 seats by luxury-jet specialists at Greenpoint Technologies, is the third and last of a batch ordered in 2005. They will be operated by the USAF reserve to carry Congressional delegations around the world.

Funny how nobody in Washington ever mentions these $70 million jets as an example of wasteful defense spending. Or as an example of an unjustified Air Force mission that doesn't support our soldiers on the ground.

And don't forget, the travel perks don't end there. In addition to their global junkets on Air Force VIP aircraft, members of Congress also received 32, fully-reimbursed trips to their home districts each year, and free, reserved parking at Reagan National Airport in Washington.

One final thought: the delivery of a new "junket jet" for Congress may infuriate a lot of taxpayers, but there's a method in Boeing's apparent madness. Winners of the KC-X and CSAR-X contracts will be announced early next year, and by delivering the C-40 now (just in time for Christmas holiday "fact-finding" trips), the aircraft giant hopes that some of its Congressional friends will pressure the Air Force to steer those contracts toward Boeing.

I'm a C-40 pilot in that reserve unit (932 AW), we have 3 C-9C's as well. We use both airframes for a lot more than CODELs. Unfortunately for us, Congress is so unpopular right now that anything associated with them gets slimed.

The active duty also has C-40's at Hickham, Andrews and Ramstein. The DC Guard also has 3 at Andrews.

C5--I can't disagree with anything you say; obviously, the 737 airframes are used for a variety of missions, and some of them were due for replacement.

However, with its luxury cabin, it seems clear that the new jet will see more than its share of duty as a transport for Congress-critters, on trips that do little more than waste tax dollars.

Over the years, I've had a few co-workers/friends who served in the 89th MAW, or some of the other units that provide VIP transport. They've told me some stories that make me wish we could get out of the VIP airlift business once and for all. Unfortunately, it's a two-edged sword; bowing and scraping to Our Elected Leaders is good for business. I have no doubt that the new C-40 will be used a CODEL over the Christmas holidays, and Boeing is hoping that the same Congressmen/Senators will use their influence to get Boeing the CSAR-X and KC-X contracts.

You need us if you have any of these tax problems: Back
Taxes, Unfiled Returns, Missing Records, Threat of Levy, or, if you need an Installment Agreement or an Offer in Compromise A tax levy or garnishment or attachment are all the
same thing. The terms may be used interchangeably. A wage garnishment or levy may be against any asset. In the enforcement of tax collections. We prepare all Federal and State Unfiled tax Returns The Fair Tax Act (HR
25/S 1025) is a bill in the United States Congress for changing Tax Solutions laws to replace the Internal Revenue Service (IRS) and all federal income taxes (including Alternative Minimum Tax), Past due tax returns, Past due tax returns, Past due returns, Past due taxes, Unpaid tax, Tax negotiation, Wage levy, Robert M. Adams, Bob Adams, Try to Be Happy, Search Engine Optimization,