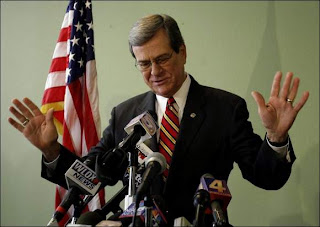 Mississippi Senator Trent Lott at today's press conference announcing his retirement from politics. With a departure from politics, Lott is an early favorite to become the next chancellor at his alma mater, the University of Mississippi (AP photo via Washington Times)

Never forget the saying, "all politics is local".

By taking up the position at Ole Miss, Lott will be well placed to do practically anything he wants, politically, through his connections and relatives (and yes, all jokes aside, having well-placed relatives in MS really *does* go a long way).

By doing so, he may sacrifice the short term gain of becoming a lobbyist in the Beltway, but he will have far more power and influence if he stays in Mississippi.

And all that federal money that keeps making its way to the Magnolia state? Just watch; there will be more of it. But at least the ships at Ingalls are seaworthy (Arleigh Burke class destroyers) vs the shennanigans going on with the Coast Guard's Deepwater program and the Navy's LCS (littoral combat ship) programs.