A Tale of Two Programs 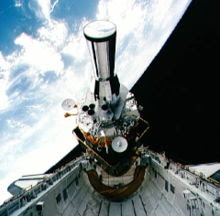 A DSP deployment during a Space Shuttle mission in 1991. Other satellites in the constellation have been launched from Air Force Titan IV and Delta IV rockets (Wikipedia photo).

For the space and intelligence communities, the first decade of the 21st Century will be remembered as the time when two critical satellite programs ended, but for very different reasons. One, the Defense Support Program (DSP), went out in a blaze of glory on Saturday, with the launch of a satellite that was completed almost a decade ago. Its delayed launch was not the product of technical delays and escalating costs, but largely because DSP satellites have lasted much longer--and performed better--than originally forecast, slowing the need for replacement craft.

The other program, quite literally, never got off the ground. It was cancelled two years ago, but Sunday's edition of The New York Times contained an extensive post-mortem on the effort, aimed at producing the nation's next generation of imagery satellites. As the Times revealed, the program (known as Future Imagery Architecture or FIA) was beset by unrealistic expectations, massive cost overruns, and a contractor that lacked extensive experience in building spy satellites. The result was a "perfect storm" of spiraling costs, shoddy work and unrealized technical specifications that cost the taxpayers "tens of billions" of dollars, according to one U.S. Senator.

In some respects, it may be unfair to compare the DSP and FIA programs. After all, an imagery bird is an infinitely more sophisticated piece of equipment, designed to capture high-resolution electo-optic, infra-red or multi-spectral images of targeted installations, on orbits more than 200 miles above the earth. The DSP constellation, on the other hand, is designed to detect missile launches from its geosynchronous orbit, and relay that information to the ground. Built around advanced IR sensors, DSP is smaller and less complex that imagery satellites, but it performs a mission that is equally important.

But the resounding success of the DSP program (and the comparative failure of FIA) was more than a matter of technology, as the Times article indicates.

"...the collapse of the project, at a loss of at least $4 billion, was all but inevitable — the result of a troubled partnership between a government seeking to maintain the supremacy of its intelligence technology, but on a constrained budget, and a contractor all too willing to make promises it ultimately could not keep.

“The train wreck was predetermined on Day 1,” said A. Thomas Young, a former aerospace executive who led a panel that examined the project.

And problems associated with the project quickly spiraled out of control:

Boeing had never built the kind of spy satellites the government was seeking. Yet when Boeing said it could live within the stringent spending caps imposed by Congress and the satellite agency, the government accepted the company’s optimistic projections, a Panglossian compact that set the stage for many of the travails that followed. Despite its relative inexperience, Boeing was given responsibility for monitoring its own work, under a new government policy of shifting control of big military projects to contractors. At the same time, the satellite agency, hobbled by budget cuts and the loss of seasoned staff members, lacked the expertise to make sound engineering evaluations of its own.

The satellites were loaded with intelligence collection requirements, as numerous intelligence and military services competed to influence their design. Boeing’s initial design for the optical system that was the heart of one of the two new satellite systems was so elaborate that optical engineers working on the project said it could not be built. Engineers constructing a radar-imaging unit at the core of the other satellite could not initially produce the unusually strong radar signal that was planned.

A torrent of defective parts, like gyroscopes and electric cables, repeatedly stalled work. Even an elementary rule of spacecraft construction — never use tin because it deforms in space and can short-circuit electronic components — was violated by parts suppliers.

By the time the project, known by its initials, F.I.A., was killed in September 2005 — a year after the first satellite was originally to have been delivered — cost estimates ran as high as $18 billion.

But there was plenty of blame to go around. The FIA program was on an extremely tight budget, with little room for error. And, making matters worse, the Clinton Administration had eased oversight on key government contracts, allowing vendors to essentially monitor their own efforts. When the program fell behind schedule and over budget, there were fewer government overseers to sound the alarm. And Boeing kept offering rosy predictions, claiming that the program could still be delivered on time.

Instead, FIA had to be eventually scrapped, at a cost of between $4-18 billion, depending on whose estimate you believe. Meanwhile, cancellation of the new imagery satellite (and, the more recent termination of a stealth spy satellite program) has left the United States with an aging intelligence constellation, one that is increasingly vulnerable to mechanical problems and enemy denial and deception (D&D) efforts.

By comparison, the weekend launch of our final DSP satellite provided a stark contrast to the collapse of the FIA effort, providing a reminder of when U.S. space programs delivered dazzling technology, on time, on budget and sometimes exceeding original performance specifications.

Over the past 37 years, the DSP program has become the backbone of our space-based missile warning system. During that time, the platform has undergone a series of technical refinements, improving its detection capabilities and performance reliability. DSP satellites can now detect tactical ballistic launches in the Middle East (and elsewhere), supplanting their original mission of tracking ICBM and SLBM activity in the former Soviet Union and China.

Originally projected to have a service life of less than two years, the DSP platforms are now designed to operate a minimum of five years. But, thanks to superb design and engineering, some of the platforms have lasted for 20 years. Officially, the Air Force won't say how many DSP birds are still in operation, but some are expected to remain on duty well past 2009, when the first replacement satellites (part of a system called SIBRS) will be launched.

Reading the account of the final DSP launch, you also gain an appreciation for the highly-skilled experienced workforce associated with the long-running Northrup-Grumman program. Peggy Paul, Northrup's DSP manager, estimates that more than 25% of her team is retirement eligible, and "quite a few" will leave the company, now that the last DSP satellite is on orbit. Many of Paul's engineers have decades of experience in the program; some have spent their entire careers working on DSP.

Replacing that talent is going to be a major problem, not only for Northrup-Grumman, but for the entire defense establishment. Engineers who spent their careers in programs like DSP were motivated by a desire to work on cutting edge technology, and contribute to the nation's defense.

Today, fewer young Americans are opting for careers in science and engineering, and many of them would rather work for Apple or Google, instead of Northrup-Grumman and Boeing. If we don't find a way to reverse that trend (and build stable, experienced engineering teams at defense contractors) we'll face more debacles like FIA. Of course, it would also be equally helpful to fix the acquisition process, ensuring that the Pentagon isn't hoodwinked by contractors who promise more than their engineers can deliver--and expect the taxpayers to bail them out when they fail.
Posted by Unknown at 10:12 AM

SMSgt Mac said...
This comment has been removed by the author.
10:36 PM

I knew I would like your take on the last DSP launch. It sounds like the FIA is the A-12 of the space sector. When the A-12 competition was underway, Northrop's bid was technically excellent but higher than the other bidders. In the Navy's post-mortem, the Navy estimated the program cost at completion would have equaled Northrop's bid. It's the Curse of Prior Knowledge when bidding contracts, but there's no substitution for experience and knowledge in the execution. (Primary Source: RAND study "The Cutting Edge")
Thanks!

The Northrup/Grumman/Vought (then three separate companies) contract proposal for the A-12 wasn't just higher than other bidders. It was a cost-plus proposal, when the Navy had specified fixed fee - General Dynamics/McDonnell Douglas put in a fixed fee bid as specified, which arguably led to many of the later problems. Specification creep is difficult no matter what the venue, but on a the cutting edge of technology it's more of a concern. When I heard the Navy had cancelled the GD LCS, and read one acquisition official's statement about going back to fixed fee contracts, all I could think was "the cycle comes full circle."

It probably wasn't entirely a case of a penny-wise pound-foolish customer, and a conniving, overpromising contractor. Knowing what I know about how Lockheed works, it was probably more along the lines of:

CUSTOMER: We want our next program to have (mutually-incompatible capabilities).

Is it any surprise that Boeing got the contract? It's Lockheed's fatal flaw...building what the customer needs, instead of what the customer wants. (Or, in some cases, Lockheed builds what they think the customer would need if only they were doing things the way Lockheed thought they ought to be done.)

"Today, fewer young Americans are opting for careers in science and engineering..."

I've often thought that this is because nobody is doing anything to make science and engineering seem interesting. Back in the Fifties, kids were going into engineering because we were all going to be living in the Jetsons Future and they wanted to help build it. These days, kids look at space, and they see...boxes. Boxes with meaningless appendages, maybe some big stick sort of things, and large round white bits. The whole thing is covered in rumpled tinfoil. The only things that go to other planets are tiny, stupid little R/C-car things that move at the breathtaking speed of one foot per hour, and take close-up pictures of dirt. Sending humans up is a ridiculously expensive proposition, and we can't even so much as do a spacewalk without cancelling it because someone farted in their spacesuit. Space isn't inspiring.

I think that part of this is because so much of the cool stuff is classified, and will be classified forever. I've seen some pretty wild stuff in my time, but I can't ever talk about it, and neither can anyone else. It's just a bunch of paper that's going to sit in a locked drawer in a locked room in a locked building, and everyone who worked on it will gradually forget about it, and eventually they'll just dump all the paper in a shredder and yet another awesomely cool idea will vanish because destroying it is cheaper than declassifying it.

Not to say that I'm going to be the one to divulge information! I'm just saying that there are any number of inspiring projects out there, real Buck Rogers stuff that kids would love to know about, and they'll never be allowed to know because they don't Need To Know.