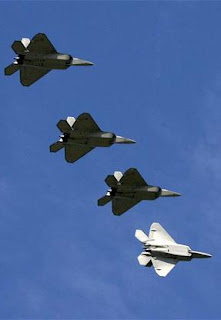 U.S. Air Force F-22 Raptors reportedly conducted their first-ever intercept of Russian Bear H bombers on Thanksgiving Day.
Military sources tell In From the Cold that the intercept occurred as the Russian aircraft approached Alaskan airspace in the Aleutian Islands. A total of four F-22s from Elmendorf AFB, near Anchorage, were scrambled to intercept two Russian bombers, which were detected at long range by radar and intelligence systems.

The Raptors flew alongside the TU-95s for a few minutes before the bombers turned and headed back toward Russian airspace. One of the photographs taken during the intercept is said to show the F-22's shadow falling across the fuselage of a Bear H.

The Thanksgiving mission was the latest by Moscow's long-range bomber squadrons, which have become increasingly aggressive in recent months, following years of inactivity. Since early 2007, Bear and TU-160 Blackjack bombers have flown a series of high-profile sorties against Norway, the United Kingdom, Iceland, Alaska and Guam. In each case, the Russian bombers were intercepted and escorted by U.S. or allied fighters.

Similar missions were flown during the Cold War, and analysts say the recent flights are symbolic of a resurgent Russian military, under President Vladimir Putin.

Last Thursday's intercept came barely three months after the F-22s arrived in Alaska. Elmendorf's 3rd Fighter Wing will eventually operate two squadrons of the fifth-generation fighters. The Air Force is pushing to buy more Raptors (beyond the current production run of 183 aircraft), but critics have complained about the cost of the program.

At $130 million a copy, the F-22 is more far expensive than the F-15s and F-16s that form the backbone of the USAF fighter inventory, but the Raptor offers advanced capabilities--including stealth--that the older jets can't match.

The F-22s conducted the Alaska intercept because Elmendorf's F-15s are grounded, following a recent crash in Missouri. The Eagle involved in that incident reportedly broke apart in mid-air, raising safety concerns about other F-15s. The jets are expected to return to service after inspections of key structural components.

With the F-15s on the ground, the Thanksgiving intercept may have been an inadvertent gift from the Russians. The Air Force is expected to use the mission as proof of an escalating threat, one it hopes to counter with state-of-the-art fighters like the F-22.
Posted by Unknown at 11:41 AM

Sending those old bombers out is like sending chariots and elephants against tanks and Bradleys. Picturesque, but pointless.

Actually, the Tu-95 is about the same age as our B-52's and both have remained succesful.

Nice to be visiting your blog again, it has been weeks for me. Well, this is the article that I’ve been waited for so long. Thanks, great share.