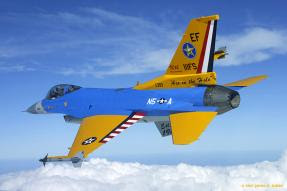 The 111th Fighter Squadron's specially-painted "anniversary" F-16. Various elements of the paint job recall the unit's service in World War II and Korea (photo by John M. Dibbs via Air Force Times).
If you're an aircraft buff in the Houston area, living near Ellington Field, keep an eye out for a specially-painted F-16, assigned to the 111th Fighter Squadron at the base.
The Viper's distinctive paint scheme recalls the squadron's long history, which dates back 90 years. The description below (printed in Air Force Times) explains the symbolism of the various colors and accents found on the jet:
The red-white-and-blue-striped rudder recalls the JN-4 Jennys the 111th flew in the 1920s, while the wings and flaps have other pre-World War II designs. The fuselage is blue for the Korean War, in which the 111th picked up two air victories. The underside is gray, for the jet age.
The “N5 A” insignia across the F-16’s tail is the one used on the unit’s P-51 Mustangs during World War II, when the squadron claimed 44 air victories. From the Korean War are the star on the tail and the “Ace in the Hole” markings.
Lastly, the ventral fin reads, “Est. 1917.”
Happy anniversary to the men and women of the 111th, part of the Texas Air Guard's 147th Fighter Wing. As you may recall, the 111th is same unit where George W. Bush once served as an F-102 pilot.
Posted by George Smiley at 9:04 AM

Viper? You meant Fighting Falcon, no?