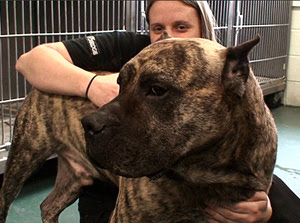 It's been more than six months since authorities first raided the Surry County, Virginia property of NFL star Michael Vick, uncovering the dog-fighting ring that led to a federal investigation, indictments, and a subsequent, guility plea from the Falcons quarterback. Vick will be sentenced next month for his role in the dog-fighting operation, and most observers believe he will receive a 1-2 year prison sentence for the crimes.
Since the scandal broke, Vick has lost his $130 million contract with the Falcons. He's also lost millions in endorsement deals that were cancelled by various sponsors (Coca-Cola, AirTran Airlines and Nike, to name a few), and his future NFL career is in doubt. More recently, Vick has also defaulted on a pair of multi-million dollar loans, another indicator of "Ookie's" growing legal and financial woes.
But another element of the Vick scandal is also working its way through the system. According to the Newport News, VA Daily Press, a dozen dogs removed from Vick's property during the investigation will soon be available for adoption. The animals--nine Beagles, two Rottweilers and a large dog believed to be a Cane Corso are currently at the Virginia Beach SPCA, and will soon be available for adoption. As the Daily Press reports:
The 12 dogs under the SPCA's care show no signs of breeding or training as fighters and have no scars indicative of dogfighting. They're undergoing behavioral and medical evaluations and then will be ready for adoption. Some are ready for suitable homes now, said Teresa Lamarche, community outreach director with the Society for the Prevention of Cruelty to Animals.
"They have great temperaments. They are nice animals," Lamarche said. "The majority, we anticipate, if not all of them, will be adoptable."
Lamarche told the paper that Vick's former dogs have been mixed in with the shelter's general population. Potential owners won't learn of their history until they're well along in the adoption process.
"The dogs are not being highlighted," Lamarche said. "You may not even know which ones they are, and that's a good thing in our mind.
"However, if people get far enough along in the adoption process and ask, the SPCA will share that information, Lamarche said.
It's not known if the animals up for adoption served as pets, or were intended for more sinister purposes. Some trainers use "bait animals" to test a dog's fighting instinct, and they are often killed or mauled in the process. However, the lack of scars and behavioral cues suggest that the dogs now at the shelter were not used to support Vick's dog-fighting operation.
Anyone interested in adopting one of the dogs should contact the Virginia Beach SPCA at (757) 427-0070, or visit their website at http://www.vbspca.com/. If you'd like to make a donation towards their support, the web address is http://vbspca.com/donate. As you might guess, the SPCA isn't receiving any money from Vick to pay for the care and feeding of his dogs. We can only hope that a federal judge rectifies that situation when he imposes Vick's sentence (and fine) next month.
Readers will also note that Norfolk-based PETA, which made public relations hay of the Vick scandal, has (again) disappeared on the issue, although their protestors will be out in force for the sentencing next month. But, since caring for the animals and placing them in suitable homes doesn't attract TV cameras, PETA has taken a pass on that element of the Vick case, leaving those jobs in the hands of the ASPCA. PETA is an absolute embarrassment to anyone who's genuinely concerned about animal welfare.
***
On a related note, Tuesday was the deadline for animal rescue groups to apply for the 48 pit bulls rescused from Vick's estate last spring. Those animals are now in the hands of a court-appointed guardian, a law professor at Valparaiso University in Indiana. Because many of the dogs were used for fighting, it's unclear if any of them can be saved.
***
Finally, the effects of the Vick case were also felt in Surry County last week. The county's incompetent Commonwealth's Attorney (Gerald Poindexter), who intially tried to bury the investigation, was officially running unopposed for a new term. However, more than 1,000 Surry County residents voted for a late-entry, write-in candidate, instead of supporting Mr. Poindexter. The write-in candidate received 42% of the vote, which speaks volumes about Poindexter's dwindling support in his own county--and public perceptions of how he mishandled the Vick case.
Posted by Unknown at 9:02 AM

By looking at the picture I believe the dog is a presa canario, the color matches, it might be on the big side but we used to have 3, at some point, and they look very much like this dog. the ears are usually trimmed and some of them(including ours) can grow to be extremely big and strong, one of ours, a bitch grew to be 80 kgs and standing on her back legs as tall as 5'9 inches.
Nice dogs as well, very lovable!!

Ricard--I'll defer to your expertise; the breed listed in the paper was simply a "best guess" by the ASPCA staffers who are currently caring for the dog. I hope that all those animals can be placed in good homes, and that the federal judge sentencing Vick will use part of the imposed fine to care for the dogs taken from Vick's estate.

A bunch of crazy chickens said...

a coworker and i are trying to see who has a cutter dog please vote for me he is currently kicking my ass.
http://worldwidefido.com/watch/3327/when-i-was-a-puppy

Well, Cane corso is a very close guess to describe dog in question, but I think ricardsala might be right, the dog looks more like a Perro de Presa Canario to me... The only quick and easy way to know if is the dog drools a lot or not, and it the tail has been docked or not (it's common on Cane Corso's)... becasue if the dog is a dry mouth and has a full tail, then it might be a Presa and not a Corso. I hope it finds a responsible owner that takes care of this wonderful dog.