Picture of the Year, But Don't Bother With That Pulitzer Nomination 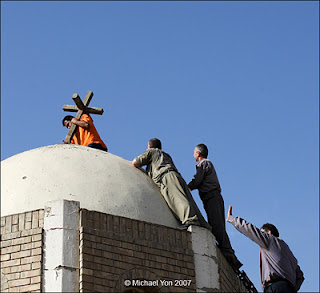 From the indefatigable Michael Yon, who recently captured this amazing sign of hope, faith and freedom in Iraq. He writes:
Thanks and Praise: I photographed men and women, both Christians and Muslims, placing a cross atop the St. John’s Church in Baghdad. They had taken the cross from storage and a man washed it before carrying it up to the dome.
A Muslim man had invited the American soldiers from “Chosen” Company 2-12 Infantry to the church, where I videotaped as Muslims and Christians worked and rejoiced at the reopening of St John’s, an occasion all viewed as a sign of hope.
The Iraqis asked me to convey a message of thanks to the American people. ” Thank you, thank you,” the people were saying. One man said, “Thank you for peace.” Another man, a Muslim, said “All the people, all the people in Iraq, Muslim and Christian, is brother.” The men and women were holding bells, and for the first time in memory freedom rang over the ravaged land between two rivers.
A number of bloggers, including Wretchard at The Belmont Club, have noted the striking similarity between Yon's photograph, and another iconic wartime image, captured 62 years ago.

Side-by-side: Joe Rosenthal's epic photograph of the Iwo Jima flag-raising in 1945, and Michael Yon's recent image from Baghdad (graphic courtesy of The Belmont Club).
It's difficult to improve on some of the posts we're read about the photograph, particularly those from The Anchoress and Kim Priestap. We can only add that Mr. Yon's image, like all great photographs, speaks to ideals and dreams that transcend a particular moment in time.
Consider those Marines on Iwo Jima, immortalized in Rosenthal's photo and James Bradley's book "Flags of Our Fathers." When they climbed Mount Suribachi on 23 February 1945, the battle was in its fifth day; hundreds of Americans had already died, and the men of the flag-raising detail knew that weeks of brutal fighting lay ahead. Three of the six men captured in the Rosenthal photograph died in combat before the battle ended. For the flag-raisers, that moment on Suribachi was not a symbol of final victory, only a measure of hard-won progress, and a reminder of what remained undone.
Likewise, the Baghdad residents in Yon's photo harbor no illusions that the battle for their country has been finally won. All could tell stories of unspeakable horrors and tragedies that have befallen their families and neighborhoods in recent years, and more tough days probably lie ahead. But recent events--namely the troop surge--have given them new optimism, creating enough hope for them to remove the cross from storage, and restore that greatest symbol of hope to its rightful place.
***
Other bloggers have suggested that Yon's photo is worthy of the Pulitzer Prize. We concur, with the realization that those awards have now fallen victim to the dictates of political correctness. In 1945, Joe Rosenthal's immortal flag-raising shot was a near-unanimous choice for the Pulitzer--the only photograph to receive the award in the same year it was taken. Fifty-seven years later, the Pulitzer jury took a pass on Thomas Franklin's iconic 9-11 image--which Life magazine described as one of the "100 photographs that changed the world. 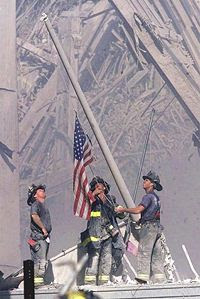 Firefighters raise Old Glory over the remains of the World Trade Center, 11 September 2001 (photograph by Thomas E. Franklin, The Bergen Record)
While no one can doubt the power and majesty of Franklin's work, the jury gave the top photography prize of 2001 to The New York Times, for its coverage of the terrorist attacks.
The absence of American flags--or other patriotic symbols--in the Times' winning portfolio is particularly telling. Against that backdrop, Michael Yon's marvelous photo doesn't stand much of a chance.
Posted by Unknown at 9:32 AM

Anyone see an ideological parallel between the Pulitzer and Nobel committee decisions over the past decade or two?