The Lost Lesson of the First Thanksgiving 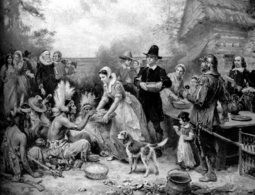 A painting of the Pilgrims' first Thanksgiving celebration in 1621. They had much to be thankful for--including a decision to abandon a collectivist economic system in favor of private property and individual enterprise. Without the change, the Pilgrims might have starved to death (Wikipedia graphic).

In honor of tomorrow's holiday, John Stossel offers a forgotten lesson in history (and economics), at RealClearPolitics:

When the Pilgrims first settled the Plymouth Colony, they organized their farm economy along communal lines. The goal was to share everything equally, work and produce.

They nearly all starved.

Why? When people can get the same return with a small amount of effort as with a large amount, most people will make little effort. Plymouth settlers faked illness rather than working the common property. Some even
stole, despite their Puritan convictions. Total production was too meager to support the population, and famine resulted. Some ate rats, dogs, horses and cats. This went on for two years.

"So as it well appeared that famine must still ensue the next year also, if not some way prevented," wrote Gov. William Bradford in his diary. The colonists, he said, "began to think how they might raise as much corn as they could, and obtain a better crop than they had done, that they might not still thus languish in misery. At length after much debate of things, [I] (with the advice of the chiefest among them) gave way that they should set corn every man for his own particular, and in that regard trust to themselves. ... And so assigned to every family a parcel of land."

The people of Plymouth moved from socialism to private farming. The results were dramatic.

"This had very good success," Bradford wrote, "for it made all hands very industrious, so as much more corn was planted than otherwise would have been. ... By this time harvest was come, and instead of famine, now God gave them plenty, and the face of things was changed, to the rejoicing of the hearts of many. ... "

Read the whole thing. Then, if you have a child in elementary school, ask them what they were taught about the first Thanksgiving. As Mr. Stossel observes, the usual bromides about "the benefits of sharing" miss the real point. The real legacy of that first Thanksgiving--rooted in private property rights and personal initiative--is all-but-unknown.
Posted by George Smiley at 11:35 AM

"The real legacy of that first Thanksgiving--rooted in private property rights and personal initiative--is all-but-unknown,"

Hopefully, this demonstrates once and for all that Stossel is mentally retarded.

His example - whether true or not - has precisely nothing to do with the economic concept of the tragedy of the commons.

It's a little distressing that no one caught that. OTOH, I've only checked the responses of righties, who aren't renowned for their understanding of economics, but this is as basic as it gets.

ib - Rather than giving us your opinion that Stossel's conclusions are ludicrous, why don't you provide us with your take on the "real legacy of that first Thanksgiving?" As a self-proclaimed "qualified" historian, surely you are suited to the task...

jpe - Same suggestion to you. If Stossel has misrepresented this "basic" economic concept, why don't you enlighten us with your thesis? (BTW, von Mises and Friedman are easily among the most influential economists of the last 100 years... and both would be considered "righties.")

Looks like Stossel woke up the socialists. This upcoming election is going to be fun, the socialist think they are on the march. But little do they know, America is not a socialist open borders type country.

Next they will be saying that Thanksgiving was not about thanking God for America. Who knew George Washington could get it so wrong.

There are two letters from the first Thanksgiving, 1621. And George Washing ton was not alive at the time.

Stossel is a moron. I thought it was common knowledge. But then knowledge is not as common as one would assume.

"Next they will be saying that Thanksgiving was not about thanking God for America." - snooker

Well, if they did, they would be actual intelligent, informed people, unlike you, since AMERICA WOULD NOT EXIST FOR OVER 150 YEARS AT THE TIME OF THE FIRST THANKSGIVING, you moron.

"Rather than giving us your opinion that Stossel's conclusions are ludicrous..."

storm24, its called peer review, and since you are not mine, i shall let this one pass

Huh. I thought the lesson of Thanksgiving was that if you want some land and it turns out other humans are already living on it, you can still make it your 'private property' - just ignore those other humans property rights exist at all, and shoot them if they argue.

Yep. That's quite a lesson there.

1) the settlers' crops failed, because they were all knew to this land as were the settlers, and they didn't know what the frak they were doing.

In Stossel's own article, he notes that the settlers started growing corn. Corn is a native American crop, that didn't exist in England.

So, once they switched to crops that could actually grow in the US, they prospered.

Collectivization has nothing to do with it. It's food. Non-American crops had a harder time growing than native crops. It's really quite simple.

2) the settlers only lived, because the few remaining American Indians who hadn't dropped dead of transplanted diseases 'collectivized' and shared their food with the starving honkies. Probably out of sheer loneliness and grief.

Gee, what stupid Indians. They should have been Stosselites and respected their own 'property rights' by letting the settlers starve to death. Right?