The Decrease in Violence

Since late summer, we've been hearing reports about decreasing violence in Iraq. But the PowerPoint slide below nicely illustrates the magnitude of the drop: 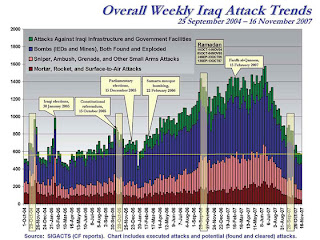 As the graphic indicates, overall attack levels are at their lowest point since the Samarra mosque bombing in early 2006. Can the decline be sustained? That remains to be seen, but the trend is clearly encouraging.

Another point to consider: the graphic was released by General Petraeus's public affairs officer a few days ago. I found it in Max Boot's excellent blog at Commentary magazine. We can assume the same slide is available to MSM outlets--or, at the very least, they could present the information in their own graphics. Have you seen this slide in a major American newspaper, or on the evening news?

I just can't get my fever swamp BDS impaired mind around the chart.

I can't see a pattern.

Didn't the surge start the instant Congress allotted the money to it.
I mean, when Congress allots money the military personnel are Star Trek Transported to the theater of battle. Right now... And, the pattern I can't see wasn't immediately apparent.

There must be something else going on here.