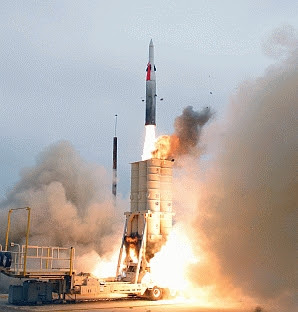 A Reuters dispatch out of Israel indicates that the Olmert government is preparing for "The Day After"--the possibility that deterrence efforts will fail, and Iran will acquire nuclear weapons.
According to the report, Prime Minister Ehud Olmert has instructed his ministers to draft proposals on how to cope with a nuclear Iran.
The report was later denied by a senior Prime Minister's Office official, Israel Radio reported.
The agency quoted a source close to Olmert as saying there were "long-term ramifications to be addressed, like how to maintain our deterrent and military response capabilities, or how to off-set the attrition on Israeli society that would be generated by fear of Iranian nukes."
Despite the official denials, cabinet member Ami Ayalon told Reuters there is a need for a three-point strategy against Iran:
"First, we must make clear that this is a threat not just to Israel, but to the wider world. Second, we must exhaustively consider all preventive options. And third, we must anticipate the possibility of those options not working," Ayalon said.
Reaction to the story has been decidedly mixed. Some in the blogosphere have claimed that Mr. Olmert is "selling Israel down the drain," concluding that a nuclear-armed Iran is all-but-inevitable.
Other pundits believe that the Israeli government is simply being prudent. The international community has consistently refused to take more decisive action against Iran (and its nuclear program), and there's no guarantee that military action would completely eliminate the threat. Under that scenario, Israel could very well face a nuclear-capable Iran at some point in the very near future.
Reading between the lines, we believe the Israeli comments reflect a number of considerations, and they're aimed at both domestic and American audiences. First, the statement is an indirect admission that there are limits on Israel's ability to strike Iran. As we've noted in the past, the IAF is constrained by its ability to provide in-flight refueling for an air strike against Iran, and the need to cross hostile airspace.
Given those limitations, an IAF attack would likely be a "one-time" operation, involving a relatively limited number of F-16Is, F-15Is and KC-707s (with probably no more than 24 strike aircraft). That means elements of Iran's nuclear program might escape serious damage, and could be quickly reconstituted. The problem is further exacerbated by the possibility that Tehran has a parallel, covert nuclear effort, in locations unknown to Israeli or western intelligence.
That's why the Israelis would prefer that the U.S. take military action against Iran. American carriers in the Gulf--and Air Force expeditionary winds based in the Middle East--could launch a sustained aerial bombardment of Tehran's key military and nuclear facilities, reducing survival prospects for key installations, equipment and personnel.
But that creates serious problems for Washington, both politically and militarily. On the political side, there are concerns that an attack against Iran would completely destroy GOP prospects for retaining the White House in 2008. While President Bush's decision-making has never been controlled by polls and electoral concerns, he is not oblivious to the political ramifications of attacking Iran.
Additionally, a number of senior U.S. military officials have recently noted that a "new front" against Iran would place a further strain on our armed forces, already stretched-thin by the conflicts in Iraq and Afghanistan. While none of those officials have stated that we lack the capability to attack Iran, they have cautioned that expanded operations would come at a very high price, particularly in terms of money and equipment.
And, if Mr. Bush takes a pass on striking Iran before his term ends, then it's all-but-certain that a Democratic successor would also refrain from military action. That's why those Israeli comments (conveniently offered to a Reuters correspondent) are also aimed at Democratic presidential hopefuls. Tel Aviv has no confidence in the willingness of a Democratic administration to deal forcefully with Tehran--and those concerns are well-founded. Not long ago, one of the party's leading presidential hopefuls suggested that he would be willing to talk with Ahmadinejad, the same man who has suggested that Israel should be "wiped off" the map.
With their own military options constrained--and the U.S. seemingly unable to act, it's no wonder that Israel is growing increasingly pessimistic in its outlook. With the world community unwilling to aggressively confront Iran, and with limited military possibilities, planning for "The Day After" may become Israeli state policy by default.
Posted by Unknown at 2:53 PM

Iran is a natural non-Arab nation for Israel security in the Middle East region. Persians and Jews have common historical and cultural links. People of Israel know that below the surface of verbal bravado from the present Presidents of Iran and Israel, these two nations have to survive the sea of hostile Arabs. Iraq invasion of Iran was a reality check for Israel.

Israel recognized that the same Arabic nations who supported Iraq against Iran will attack again non-Arab Israel. These two nations were both Muslim. Jews are not really welcomed among Arabs. These findings are not surprising considering the integrated financial, technical, and armaments that were provided by many Arab countries to support Arabic Iraq against non-Arab Iranians and Kurds. Iran and Israel have a lot of common security interests. The United States’ and Israel’s common interests in the region do not support attacking Iran. We must stop arming Arab nations, providing massive military aids (Egypt) hoping that all will be fine. These arms will eventually kill American and Israeli people.

The interests of the United States in the world dictate that we must open a frank unconditional dialogue with Iran recognizing the constructive contribution of the country to: Afghanistan against Taliban, conflicts between Armenia and Azerbaijan, and al Qaeda in Iraq.

'a frank unconditional dialogue with Iran recognizing the constructive contribution of the country to: Afghanistan against Taliban, conflicts between Armenia and Azerbaijan, and al Qaeda in Iraq.'~ mtb

Uhmmmm.... What? 'constructive contributions'? From Iran? Against the Taliban?

Terrorist ties between Armenia and Iran:

Iran works with Al-Queda in Iraq:

Yeeeeeeeeeeah. I can see all the 'constructive contributions' you are so pleased with. Good God. And you want to negotiate with that.

As to Israel: I have NO doubts that a number of muslim capitals will vanish from the face of the Earth, should a nuclear strike ever fall upon Jerusalem or Tel Aviv.

Otter--I can only echo your sentiments. During the days of the Shah, there was an informal relationship between Iran and Israel. Tehran sold oil to the Israelis, and there was a minor degree of military cooperation as well. Had Jimmy Carter not sold the Shah down the river, I could have easily envisioned him recognizing Israel at some point, and the geopolitics of today's Middle East would have been vastly different.

Like you, I don't see how Israel can have any relationship with a regime committed to its destruction. Say what you will about the Shah, but he had no designs on wiping Israel off the face of the earth.

Here's one for the PM
Either get inside their weapons or sneak your own nuke close to theirs and when they finish making their warhead, detonate it or the one you have close to it and make sure that you kill (or capture) all witnesses.
Then everyone says "What a shame. They had an accident." Oh, and spread a few rumors through the MSM that some of their own people may have set it off in protest against their own government.
If you go with this send me a check or at least a box of oranges to
Frank Carsen
USA