Terror Targets Down the River? 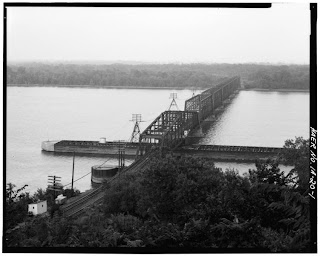 Burlington, Iowa rail bridge across the Mississippi River, one of the seven "high traffic" rail crossings of that waterway (Wikipedia).

In the wake of last night's tragic bridge collapse in Minneapolis, the FBI was quick to announce that the incident was not the work of terrorists. That assessment was based on several factors, most notably the lack of explosions or suspicious activity around the I-35W span, and the apparent, systemic failure of the bridge, which crossed the Mississippi River.

At this point, all signs point toward some sort of design or construction failure as the likely cause of the disaster. The Minneapolis Star-Tribune is reporting that the I-35W bridge was rated "structurally deficient" during a 2005 inspection, and a former chairman of the National Transportation Safety Board (NTSB) told the paper that vibration from construction work and a passing train may have contributed to the collapse, which killed at least four people.
While the Minneapolis investigation is expected to focus on structural and maintenance issues, it may be time to revisit the potential terrorist threat to critical bridges. Since March, insurgents in Iraq have used vehicle bombs to damage or destroy at least six major bridges, including three in the Baghdad area. In the U.S., there have been periodic reports about terrorist threats to major spans over the past six years, including the Brooklyn Bridge in New York, and the Golden Gate Bridge in San Francisco.
Fortunately, the domestic threat has (so far) failed to materialize. The Brooklyn plot was laughable; a 34-year-old Pakistani-born truck driver--with apparent Al Qaida ties--reportedly planned to topple the span with a blow torch, and eventually gave up on the idea, although his actions did land him in federal prison. The alleged threat to the Golden Gate was almost immediately discredited by the FBI when it was announced in 2002.
While attacks against those landmarks would cause massive traffic problems--and give terrorists a major psychological victory--some of the most lucrative bridge targets are located in the nation's heartland, at rail crossings over the Mississippi River. Forty percent of the nation's freight rides the rails, and much of it crosses the Mississippi at one point or another.
Since the mid-1800s, scores of rail bridges have been built across the river, but today, the majority of freight trains pass at seven major crossings: Little Falls, Minnesota; LaCrosse, Wisconsin; Clinton, Fort Madison, and Burlington, Iowa; Thebes, Illinois, and Memphis, Tennessee. Collectively, at least 680 million gross tons of freight cross these bridges each year. The Clinton span (which is owned by the Burlington Northern/Santa Fe railroad, has the distinction of being the busiest crossing, handling 160 million gross tons a year--almost one-quarter of the freight that crosses the seven major bridges.
Security for these crossings rests primarily with the railroads and local law enforcement. Rail carriers claim that they have improved security practices since 9-11, but an investigation by the Pittsburgh Tribune-Review (published last January), found little or no police presence along key rail routes, and shoddy security practices at both hazardous chemical plants and the railroad lines that serve them. Visiting rail facilities from New Jersey to the West Coast, a Tribune-Review reporter was never questioned as he climbed trains, photographed derailing levers and peeked into control boxes that control rail traffic.
Results of that investigation provides little assurance about security at rail bridges that span the Mississippi. Many of the crossings are located in small towns (with limited police resources), and there's no evidence that the railroads protect the bridges more effectively than the trains and rail yards visited by the Tribune-Review.
Could terrorists damage or destroy one of the major rail crossings? Based on existing security measures--and the Iraq example--the answer is probably "yes." It wouldn't take much to drive a truck laden with explosives onto a bridge and detonate it, or place charges at key points on the structure, and trigger them with timers or a pressure switch, activated by a passing train. The results of such a strike would be devastating, destroying the bridge or disabling it for months, and snarling cross-country shipments of coal and other critical cargo. Successful bridge attacks would also close sections of the Mississippi to barge traffic, limiting water-borne shipments as well.
Are terrorists considering such attacks? While there have been no reports of a credible "bridge plot" since 9-11, two events over the last year did raise concerns. In July 2006, a large, floating "pipe bomb" was discovered in Lake Pontchartrain, north of New Orleans. Authorities said the device--which wasn't large enough to damage a bridge--had the characteristics of a "test run." Despite an aggressive investigation, local and federal authorities have been unable to find the bomb maker, and determine the motivation behind the device. A floating "IED" could be used against bridge piers and supports, although it would take a huge amount of explosives to damage or destroy those concrete structures.
More recently (in early June), authorities in the St. Louis area were investigating the theft of a "large" amount of explosives from a training facility used by local police and FBI agents. Officials said that C-4, "several" sticks of dynamite, fuses and igniters were stolen from the facility in St. Charles County. According to one police spokesman, the amount of missing explosive material was enough to "blow up a bridge." That analogy was telling, since St. Louis has a number of bridges across the Mississippi (mostly for road traffic) and five of the critical rail crossings are within a 300-mile radius of the city.
Posted by Unknown at 9:32 AM