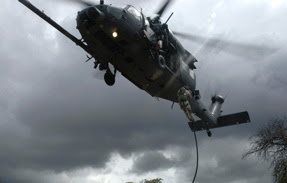 HH-60 Pave Hawk. The Air Force is still searching for its replacment, and delays in that program could mean that some of the current CSAR choppers will be flying long after their projected retirement date (USAF photo via Air Force Times)
Efforts to field a new helicopter for Air Force combat search and rescue (CSAR) units have suffered another setback.
Yesterday, the Government Accountability Office announced that the competitors for the helicopter contract--Boeing, Lockheed-Martin and Sikorsky--will be allowed to revise their bids because the Air Force has changed its methods for calculating maintenance costs. Previously, the GAO ruled that the service erred in determining projected maintenance costs for the three choppers, the HH-47 (built by Boeing), the US-101 (a European design produced under license by Lockheed) and Sikorsky's S-92.
While acknowledging that its maintenance calculations were off, the Air Force refused to let the three contractors revise their bids. That touched off another round of protests from Lockheed and Sikorsky, prompting the most recent GAO ruling. Ten months ago, the Air Force actually awarded a $15-billion contract to Boeing for a CSAR version of its CH-47 Chinook. But, as Air Force Times reminds us, that deal was put on hold, due to objections from Lockheed and Sikorsky.
Obviously, there's a need for transparency (and accountability) in the contracting process, and CSAR crews deserve the best platform for their demanding mission. But continued haggling over the helicopter deal suggests that we're entering a new era of defense contracting. If the initial process doesn't go you way, file and appeal and keep keep them coming until your company wins the contract--or, at least gets another shot at the contract.
Here's the bottom line: the Air Force (arguably) made a mistake when it bought the HH-60 Pave Hawk for the CSAR mission 20 years ago. It's load capacity is severely limited; with a full rescue crew on-board, there's only room for two litter patients. There's also recognition that the "traditional" rescue mission of rescuing downed pilots or aircrew members has changed; a more likely assignment for today's CSAR crews is the exfiltration of SOF personnel, which (typically) requires greater lift capability and a more rugged airframe.
The HH-47 met those requirements, and it's a big reason that Boeing won the CSAR contract last November. Opponents of the Boeing product have argued that the chopper is too noisy for rescue missions, but that ignores an important fact: the Army's elite SF aviation unit recently took its new Chinook variant (the MH-47G) into combat over Afghanistan, and the results have been impressive to date. If the MH-47 is stealthy enough for the Night Stalkers, it should be quiet enough for CSAR.
Meanwhile, those HH-60s keep getting older, and their lift capacity will never improve. When the HH-47 contract was announced last fall, the Air Force hoped to receive the first helicopter in 2009; with the GAO's mandate to re-open the bidding process, the delivery date will be delayed until at least 2010 or 2011. That's important, because the planned replacement of the HH-60s will occur over a 12-year span, meaning that some Pave Hawks may still be in service in 2022, long after their projected retirement.
Or, if airframe stress and reliability become an issue, the Air Force will simply retire the Pave Hawks on schedule, while waiting for the final deliveries of the new CSAR helicopter. That would result in significant operational gaps, with some units having limited capabilites due to aging or limited equipment. It's not the sort of thing that aviators, SOF personnel and other "potential" CSAR customers want to hear.
At some point, somebody is the Pentagon needs to say "enough" and end the bidding process once and for all. All three helicopters had the opportunity to "show their stuff," and with the revised maintenance costs, we should have a firm idea of how much it will cost to keep them flying. With the next round of bids, Air Force (and DoD) officials should have enough information to make a final decision, allowing the service to get on with the process of buying and fielding a new rescue chopper. The GAO could be helpful as well, by waving off the protests that will inevitably come from the losing contractors. A final decision on the "new" rescue platform has been delayed long enough.
But sadly, we think the "helicotper wars" are far from over. The proposed CSAR platform contract is not only lucrative, it's attracting a lot of political interest as well. Sikorsky's S-92 would be built in Connecticut, so Senators Joe Lieberman and Chris Dodd are lined up behind it; the assembly plant for Lockheed-Martin's US-101 is located in New York, so you can imagine which chopper is being supported by Chuckie Schumer and Hillary Clinton. As for the Boeing aircraft, it would be produced in Pennsylvania, the home of influential GOP Senator Arlen Spector. With billions of dollars (and hundreds of jobs) at stake, it's doubtful that any of these pols will "surrender" the CSAR contract without a fight.
In the late summer of 2007, the Air Force is no closer to buying a new rescue helicopter than it was a year ago. And, if the haggling and protests continue, we may be stuck in the same rut a year from now. For something as imporant as a CSAR helicopter, it's simply no way to do business.

It's gotten to the point where it's almost surprising if DoD awards a contract (especially aviation related) without the losers protesting the decision...I don't even want to think about what KC-X is going to be like.

Mike is right, but the fight for the almighty dollar has eclipsed military needs and has assisted in the loss of American Military lives for the last forty years.

With turnaround time for almost anything, five to ten years minimum, and costs always overrun and estimates always wrong, and the final product always having major problems, our Military is not getting the support it needs, when it needs it and what it needs.

And the American taxpayer is getting screwed big time, every time, all of the time.

Very few but insiders knew of this of course for years and years. But with the advent of the Internet and people speaking out, it is becoming common knowledge just how screwed up our system is.

For what it's worth, here's the professional opinion from a former US Air Force pilot about the HH-47 as a SAR helicopter (scroll down a paragraph or so to see the letter):

From the article:
"...procuring the HH-47 for the CSAR mission makes as much sense as entering a Winnebago in a NASCAR race."