Return of the Caribou? 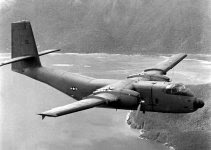 Many Vietnam-era veterans can tell stories of "white knuckle" flights in the back end of a C-7 Caribou, the small, twin-engine transport that performed yeoman service in Southeast Asia.
Capable of carrying a three-ton payload (at ranges up to 500 miles), the Caribou was ideal for ferrying troops and cargo to isolated fire bases and special forces outposts, operating from runways that were too short for other transports, including the C-130 Hercules. Many of the "airfields" visited by the C-7 were little more than dirt strips carved out of the jungle. Take-offs and landings on those runways were sometimes an adventure, both for the crew and their passengers.
With the end of the Vietnam War, Air Force interest in the so-called "assault airlift mission" languished. The service retired its last C-7 in 1985, opting instead for larger tactical airlifters (like the venerable Hercules), and long-range strategic transports (such as the C-5 and C-17), capable of delivering heavy loads over long distances. For both the Cold War, and later, in support of operations in the Middle East, both the Pentagon and the Air Force preferred airlifters that could carry tanks or large numbers of troops; small, twin-engine transports like the C-7 were viewed as relics, almost unique to the conflict in Southeast Asia, and of little use on the "modern" battlefield.
Reading Rand's new report on airlift support for counter-insurgency operations (COIN), we're wondering if it's not time for a new version of the Caribou (or a similar transport), optimized for that unique mission. The growing focus of counter-insurgency efforts in U.S. national security policy has re-ignited the debate over how airlift forces can best support that mission, with emphasis on the type(s) of platforms needed, how those assets should be organized, as well as the doctrine and training requirements.
The authors of the study, Robert Owen and Karl Mueller, disagree. They believe that the Air Force's current airlift assets can provide required support for COIN operations, with modifications in crew training and operational doctrine. While we're certainly not questioning the integrity or objectivity of Messrs Owen and Mueller, their analysis certainly represents the "preferred" Air Force answer. The service considers airlift as one of its "core" missions, and has battled other branches of the military (most notably the Army) when they've tried to develop their own air transport capabilities.
But is the Air Force's current "mix" of C-130s and C-17s suitable for the COIN airlift mission? Owen and Mueller believe that they are (with some important caveats), but we're not convinced, for several reasons. First, the C-17 will form the "backbone" of our strategic airlift fleet into the middle of this century. While the Globemaster III is exceptionally capable, the Air Force freely admits that it doesn't have enough of them, and every C-17 allocated for COIN support will create further shortfalls in strategic airlift capabilities.
Secondly, there's the issue of how much risk you're willing to accept for a $200 million airlift that's already in short supply. As the Rand study notes, insurgent forces around airfields and bases used by COIN forces may have advanced, shoulder-fired SAMs, capable of damaging or downing a C-17. While the aircraft has impressive short-field capabilities (for a four-engine jet transport), it's hard to imagine that Air Mobility Command--which controls Air Force airlift assets--would send such a valuable asset into that sort of environment. The C-17 has on-board counter-measures, but there's always the chance that the insurgents will upgrade, using more advanced MANPADs that can defeat the aircraft's defensive suite.
Besides, delivering cargo and passengers into austere bases is a specialty of the C-130, which also has on-board defenses for the MANPAD threat. But the Hercules fleet is getting long in the tooth; as of April 2007, the Air Force had grounded or placed flight restrictions on 51 of its oldest C-130s because airframe stress made them unsafe for normal flight.
Making matters worse, Congress has required the service to maintain some retired C-130s for possible recall, a move that preserves jobs and funding in Air Force Reserve and Air National Guard units, but does little to improve airlift readiness or capabilities. And you won't be shocked to learn that aging C-130s will not be replaced on a "one for one" basis by the newer "J" model. That means an airlift shortfall in the Hercules community as well, with fewer airframes to support COIN operations, and more routine missions.
We should note that the Air Force--and the Army--are purchasing 78 smaller C-27 Spartans, also known as the Joint Cargo Aircraft (JCA). Deliveries of the new transport (which can carry up to 9 tons of cargo) are expected to begin in 2010; however, the Rand analysis suggests that even an upgraded version of the Spartan is poorly suited as an "assault airlifter," lacking the short and rough field capabilities needed for that mission.
While Owen and Mueller believe that current airlift forces (and organizations) are up to the COIN support mission, they warn that the Air Force can't sustain that posture much longer. If counter-insurgency remains a focus of U.S. military operations--as expected--both the service and the Pentagon will eventually have to bite the bullet, and make the appropriate investment in a new assault airlifter, and aligning that platform to optimally support its operational customers.
With the Air Force now straining to finish F-22 production (and budget for the F-35, new UAVs and a new manned bomber), finding money for a new "assault transport" may prove as tough as some of those C-7 landings back in 'Nam.
Posted by Unknown at 2:45 PM

I agree that the report looks as if it was written to support the air force's perspective. Which is a pity because the smaller cargo aircraft should have included rough field capability, otherwise all you have is a smaller normnal aircraft with limited utility.

With a range of 200nm the Osprey doesn't have the range required but it certainly looks as if the aircraft could be usefull in the COIN role.

Does the USAF still operate the CN-235? It's a little bigger than the Caribou but it's a modern machine that carries about 2 tons more payload (6 tons) and cruises at more than twice the speed of the Caribou (which could manage maybe 100kt with a tailwind). The CN-235 is (was?) the smallest cargo plane operated by the USAF

The CN-235 suffers from the same limitations as the C-27; limited range, and a takeoff "roll" that's too long for the COIN support mission.

As for the Osprey, it was once envisioned for a variety of special forces missions with Air Force units, but now its duties are being described in one phrase: long-range combat infiltration/extraction.

I think that's an indicator that the Osprey has been a big disappointment, at least from the USAF perspective. Go back a few years, and you'll see the service talking about using the CV-22 as a replacment for CSAR helos, the Pave Low special ops chopper, and even the MC-130. Now, with the Osprey at about $50 million a copy (and still beset by operational and maintenance questions), the Air Force can only afford 50, and they'll be used to replace the Pave Lows. Meanwhile, we're having to spend millions more a new CSAR chopper, and the Combat Talons will soldier on for years to come.

Makes you wonder what the Air Force could have bought had it taken a pass on the Osprey.

Unknown said...
This comment has been removed by the author.
8:50 AM