A Flight into History 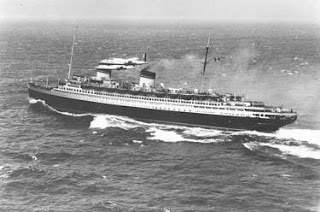 Sixty-nine years ago, a flight of B-17 bombers took off from Langley AFB, Virginia, and headed out over the Atlantic Ocean. Their mission: intercept the Italian liner Rex, headed for New York City, demonstrating that American airpower could defend our shores at great distances.
With a young navigator named Curtis LeMay in the lead B-17, the Army Air Corps bombers completed their assignment, buzzing the Rex about 800 miles east of New York. It was a stunning accomplishment for the bomber crews; in an era before inertial navigation systems and GPS, locating the fast liner in the open ocean was no mean feat.
The Rex mission--which occurred on May 12, 1938--marked the first major triumph of LeMay's storied career; seven years later, at the end of World War II, the Ohio State ROTC graduate would be a Major General, after leading bomber commands in both Europe and the Pacific. He became a full General at 44--the youngest since U.S. Grant--built Strategic Air Command into the nation's nuclear deterrent in the 1950s, and later served as Air Force Chief of Staff under Presidents Kennedy and Johnson.
Heavy publicity of the liner intercept also provided a timely boost for the B-17. Three years earlier, a prototype crashed during a test flight, prompting the Army to cancel an order for 67 B-17s. Only a legal loophole allowed B-17 proponents to order 13 additional aircraft for service testing. Those bombers--an upgraded version designated the YB-17--made the intercept of the Rex, and helped secure the aircraft's operational future.
Early today, three B-52s launched from Barksdale AFB, Louisiana, on a flight that commemorates the 1938 mission, and underscores the ability of long-range bombers to strike at potential maritime threats. Details of the mission profile haven't been released, but our sources say the "target" for today's mission is the USNS John T. Bobo, a 670-foot, Military Sea Command Roll-On/Roll-Off ship. Barksdale is home of the Air Force's 2nd Bomb Wing, a successor to the unit which flew the Rex mission in 1938.
Reporters from selected media outlets (including the Shreveport Times) are flying with the bomber crews, and they're expected to post reports and photographs later today. Obviously, much has changed in aviation technology over the past seven decades, but locating a single ship in a vast sea--even a large RO/RO like the Bobo--remains difficult. It will be interesting to learn how much advance information the B-52 crews had on the route of the vessel, and whether the Bobo was allowed to maneuver (or use other tactics) to evade detection. We're told that mission planners declined assistance from a national agency in attempting to locate the Bobo. That suggests that the crews are confident in their own abilities (and onboard sensors), or they have good information about the ship's projected location.
We're also told that the "scenario" for today's mission involves the intercept of a ship that poses a terrorist threat against the CONUS. While B-52s units have long been equipped--and trained --for maritime defense missions, the scenario may re-ignite a long-running debate between the Air Force, Navy and Coast Guard over who is best-qualified to deal with such threats.
There's also the thorny issue of whether a long-range bomber would ever be allowed to attack a terrorist vessel heading toward the CONUS, and under what circumstances. The decision to launch such a strike would (clearly) depend on timely, accurate intelligence information about the ship, its cargo and its intentions. While our database on merchant shipping and cargoes has improved markedly since 9-11, there are still significant gaps. Without conclusive proof that a vessel is on a terrorist mission--and poses an imminent danger to the U.S.--it's doubtful that an armed B-52 would be dispatched to engage it.
Still, few platforms are better-suited for long-range maritime surveillance (and strike) than the Buff. If Osama bin Laden's "navy" (once said to number 20 vessels) has designs on a CONUS target, then today's B-52 mission serves as a reminder that we can reach out--and engage them--long before they reach our shores.
Somewhere, "Bombs Away LeMay" is smiling.
Posted by Unknown at 11:05 AM

Nice post. My uncle was the radio operator in Lemay's plane. He told me they thought the mission was going to be a failure, but Lemay's navigation proved dead on when they dropped below the cloud cover. On the way back to Langley Field, they ran into a terrible thunderstorm with lots of hail. Uncle "Jeep" said when they landed,the plane looked like someone had gone over it with a ballpeen hammer. Col Robert Olds was the command pilot/flight commander.