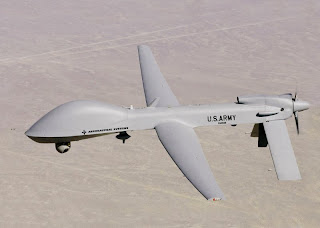 Back in April, we noted the looming fight over which branch of the armed services would serve as "executive agent" for the military's medium and high-altitude unmanned aerial vehicles.
The Air Force essentially threw down the gauntlet to its sister services, arguing for the executive agent role, based on its extensive experience in developing (and operating) the Predator, Reaper and Global Hawk systems. In a memo sent to senior defense officials last March, the Air Force Chief of Staff (General T. Michael Moseley) stated that the executive agent function was a natural fit for his service, which is already conducting "joint, interdependent warfare from the air, and through space and cyberspace." As executive agent for UAVs, the Air Force would become the Pentagon's "lead agency" in developing and employing unmanned drones.
Not surprisingly, the other branches of the military were reluctant to go along. All have their own UAV programs in the pipeline and fear that those programs would be cut--or eliminated altogether--in favor of Air Force systems. An article in Sunday's Financial Times suggests that the various services remain as entrenched as ever, just weeks ahead of a decision on the "executive agent" issue by Deputy Defense Secretary Gordon England. FT reports that senior Army and Air Force generals are also lobbying key members of the House and Senate, expecting that the controversy will eventually involve Congress as well.
Critics of the "executive agent" concept claim that the Air Force plan would inhibit development of some UAVs, and result in a drone force that doesn't meet the need of the other services. In response, the USAF believes that without an executive agent, the Pentagon will wind up with multiple drones for the same mission (at a higher costs), and an employment strategy that would "tie" UAVs to specific units--without consideration of more "flexible" options.
As we noted previously, the idea of an executive agent makes a great deal of sense, both operationally and logistically. And, with its extensive expertise in UAVs, the Air Force is the logical service to lead the effort. But that won't satisfy the other armed services, who (as a group) have lagged behind on drone development and deployment, relying instead on USAF platforms like Predator and Global Hawk. Now, with the own programs--like the Army's Warrior--finally in the pipeline, the other services see the executive agent proposal as an attempt to muscle them out of the UAV business.
Clearly, the Army, Navy and Marine Corps have their own UAV requirements that must be met. But a close look at the Warrior highlights some of the Air Force arguments in favor of an executive authority. The Warrior looks a lot like a Predator, which was developed (and built) by the same contractor, General Atomics. And not surprisingly, the Army platform has range, endurance and surveillance capabilities that are similar to the older Predator system. Do we really need to spend an extra $1 billion on Warrior when more Predators could do the same job?
The Army and the Air Force would have different answers for that question, and there's the rub. For more than 60 years, the services have argued about the best way to provide air support for troops on the ground. The Army long believed that "assigning" air assets to specific units was the best approach, while the Air Force favored a more flexible system, placing them under the direction of an air component commander who allocates aircraft where (and when) they are needed most.
It's called "centralized control/decentralized execution," and it's a fundamental principle of how the USAF does business. But the Army views that as a recipe for non-support, noting that the Air Force never seems to have enough UAVs to support all ground operations, and wants notification 48-72 hours in advance, to facilitate remote control of the drones from Creech AFB near Las Vegas, where most of them are based. By having its own UAVs--and controlling them from the battlefield--the Army believes it can increase coverage and make the drones more responsive.
The Army also dismisses Air Force claims about safety of flight, noting that there have been few collisions between UAVs and other aircraft. None of those incidents have resulted in serious damage to manned aircraft, and the Army believes that the old maximum of "big sky/little aircraft" will continue to prevent accidents.
But there other issues are also at stake in this debate. First and foremost, there's the question of how Army-operated UAVs will integrate with the Air Force-developed ISR architecture established for drone operations. Through a system of intel downlink and analytical sites (known as Distributed Common Ground Stations, or DCGS), information from the UAVs is immediately assessed, analyzed and upchanneled to key customers, including U.S. Army units. If Army systems operate largely outside this network, much of the information they collect could be lost, or "stove-piped" within Army channels. There's also the issue of duplicating target coverage, if Army UAV ops are properly coordinated through the air commander, and listed in the day's air tasking order (ATO) and intel collection plan.
While we believe an executive agent would be useful in eliminating systems redundancy (and in directing the development of common doctrine and tactics), those benefits are likely to be ignored in the scramble for acquisition dollars, and protecting service programs. At this point, the advent of Army systems that largely duplicate Predator seem all but assured. The real challenge may lie in trying to integrate UAVs with similar capabilities, in the broader context of a joint air campaign.
Posted by Unknown at 3:50 AM

It seems that this could have largely been avoided if the army could just buy their own Predators and operate them. But I guess that makes way too much sense for a goverment operation.

Wasn't there also a plan where the Army would control UAV's that operated up to 3,500 ft (afterwhich the sensor would fall under control of the air component commander)?