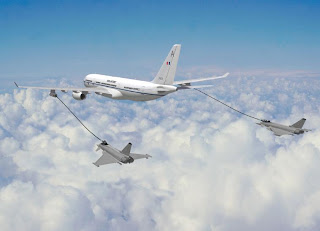 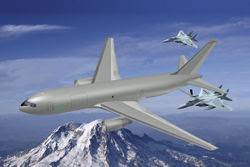 Boeing's KC-767. One of these aircraft will win the Air Force KC-X competition, and a contract to build the service's next-generation tanker aircraft.


The Air Force will wait until the end of the year to announce the winner of a $40-billion tanker contract, extending talks with bidders beyond the original, October deadline.

According to the AP, the two-month delay is viewed as a cautionary move by defense industry analysts, given the controversy the contract has created. Rivals Boeing and Northrup-Grumman are competing to provide 179 new tanker aircraft for the Air Force. The so-called KC-X program will form the backbone of the service's tanker fleet well into the 21st Century.

Boeing, which boasts that it has built refueling aircraft for 75 years, is offering a military version of its 767 jetliner, which has been in wide service for more than 20 years. The Northrup-Grumman entrant, the KC-30, is a tanker variant of the European Airbus A330. If Northrup-Grumman wins the contract, the new tankers would be built at an assembly plant in Mobile, Alabama, to blunt criticism about the Pentagon's possible purchase of a "foreign" tanker.

Boeing's 767 has been in service for more than a quarter-century, gaining a reputation as a reliable, long-range jetliner. The A330 first flew a decade later, and 480 have been produced--about half as many as the more popular 767. Northrup-Grumman claim that the KC-30 can off-load 20% more fuel than the KC-767 and haul significantly more cargo than its Boeing-built rival.

However, Boeing notes that its tanker is cheaper than the Airbus jet (about $40 million a copy), and it can access a wider network of spare parts and maintenance facilities, given the larger number of 767s in operational service. Parts "commonality" was one of the key considerations when the USAF acquired 55 McDonnell-Douglas KC-10s in the 1980s; each of those tanker/cargo aircraft can use roughly 88% of the parts found on DC-10/MD-11 aircraft, which are now produced by Boeing, thanks to a corporate merger with McDonnell-Douglas.

Ironically, the current competition between Boeing and Northrup-Grumman might not have materialized, except for the infamous "tanker scandal" which engulfed the service--and the Chicago-based defense contractor--a few years back. In mid-2002, the Air Force approved a plan to lease KC-767s from Boeing; however, that deal collapsed when it was discovered that the service's senior civilian contracting official--Darlene Druyun had negotiated a job with the contractor while overseeing the tanker deal. Druyun was eventually sentenced to nine months in prison.

Congressional reaction to the tanker scandal all-but-ensured that Boeing would have a competitor when the contract was re-opened for bidding. Enter the KC-30, built upon Airbus's initial success in selling the tanker to Britain, Australian, the United Arab Emirates and most recently, Saudi Arabia. While the number of tankers purchased is rather small, it gave Airbus (and its European defense partner, EADS) a toehold in the tanker market, which it quickly parlayed into USAF tanker competition, through the alliance with Northrup-Grumman.

Boeing has also sold small numbers of KC-767s to other countries; the Italian Air Force became the new tanker's "launch customer" in 2005, and plans to purchase four aircraft. Additionally, Japan's Air Force is also acquiring four KC-767s, to complement an equal number of AWACS aircraft, also based on the 767 airframe.

In the end, Boeing's years of tanker experience, long relationship with the USAF, and the implied pressure to "buy American" will likely carry the day. The KC-30 is a fine aircraft, but it carries an 81% greater "ground footprint" than the older KC-135, meaning that you can't fit as many of the Airbus tankers onto small airfields in combat zones. A USAF analysis also suggests that the KC-30 would require more extensive logistical and infrastructure support, limiting its ability to deploy worldwide.

Whatever the outcome, the Air Force's December decision on the tanker contract will certainly generate controversy, and (possibly) more delays. Late last year, the service awarded Boeing a multi-billion dollar deal to build its new Combat Search and Rescue (CSAR) helicopter, prompting protests from other contractors. As a result, the contract was re-opened for bids, giving rivals Sikorsky and Lockheed-Martin another crack at Boeing and its winning CH-47 design.

While that process may ensure fairness, it will also delay deliveries of needed choppers to rescue units now equipped with the HH-60 Pave Hawk. A similar delay in the tanker competition will slow replacement of aging KC-135s, at a time when some of the oldest variants have been grounded due to structural problems. Not too many years ago, announcement of a winner meant just that: a defense firm had submitted a proposal that met price and performance standards, putting it ahead of the competition. At that point, the losers (typically) dusted themselves off and moved on, concentrating their products on other programs up for bids.

That's not how the game is played today. The recent CSAR helicopter controversy illustrates had competitors can persuade DoD to re-open a contract. essentially giving them another shot--and forcing the original "winner" to restate its case. In some cases, there are legitimate performance and cost issues that require reconsideration. However, the precedent established by CSAR-X suggests that the future award of major defense contracts will only be a prelude to continued wrangling, lobbying and rebidding.

The bottom line for the acquisition process is delivering the best hardware and services to our military, at a fair price. Unfortunately, we are approaching a day when the "politics" of the process trump everything else, resulting in significantly longer lead times and potentially higher prices for critical defense systems.
Posted by Unknown at 12:37 AM