And They Wonder Why We Despise Them

We found a couple of interesting items in today's ShopTalk, the on-line forum for broadcast news professionals. The first indicates that most Americans consider the news media to be biased, inaccurate and uncaring about the people they report on; the second item shows why so many of us feel that way.

We'll begin with some poll numbers, from the respected Pew Research Center, as reported by AFP:

More than half of Americans say US news organizations are politically biased, inaccurate, and don't care about the people they report on, a poll published Thursday showed.

And poll respondents who use the Internet as their main source of news -- roughly one quarter of all Americans -- were even harsher with their criticism, the poll conducted by the Pew Research Center said.

Among those who get their news from newspapers and television, criticism of the news organizations was up to 20 percentage points lower than among Internet news audiences, who tend to be younger and better educated than the public as a whole, according to Pew.

The poll indicates an across the board fall in the public's opinion on the news media since 1985, when a similar survey was conducted by Times Mirror, Pew Research said.

Here's a complete breakout of the Pew survey, also available at the organization's website.

And, if you wonder why many Americans hold journalists in such low esteem, consider the example of Jodi Applegate, a former NBC reporter who now anchors a morning show for WNYW, the Fox-owned station in New York. Ms. Applegate will be on the cover girl of next month's More magazine, and in a conversation with the New York Daily News, she positively gushed over her own image:

I like it," she says. "It's not a typical photograph I would have taken of myself. I literally sort of teared up after I saw it. I think it's my favorite picture."

And if only her late mother could see her now!

"It [the photo shoot] was right after Mother's Day and I was thinking about my own mom. She passed away many years ago, but I was thinking that she would have been so happy to know that I grew up to have great experiences like that."

For the record, here's the photograph that moved Ms. Applegate to tears: 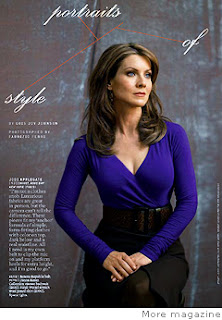 In case you're wondering, More is a magazine aimed at women over 40, offering advice on "dating younger men" and similar, weighty topics. Sounds like the magazine found the perfect cover girl in Applegate, who proves (once again) that the media is populated with shallow, self-infatuated twits, enamored of themselves, and nothing else.

We can only imagine how many mirrors she has at home.
Posted by Unknown at 2:22 PM

Ok, class, here's today's test question: Having seen that a professional polling organization finds their consumers less-than-satisfied with their product will cause news organizations to:

a) make a conscious effort to recruit from a broader cross-section of the American population, or

b) cluck their tongue knowingly about how ignorant their consumers are.

PS: that photo made me tear up too.

I hope the Pew poll results are a true reflection of how much the MSM have been outed as venal gatekeepers by the blogosphere. Anecdotally many ordinary people here in Australia are quietly disgusted too, but there is a large group who still are quite taken in - particularly by TV which relies so successfully on 'seeing is believing'. In short, I think the MSM still has a lot of power. I too pound away at them at yonkeewombat.com and newmediatheory.net.

Off topic: Even since your 'next spectacular ' post I've come back looking for further analysis. So do you have an opinion about Roggio's concern that al Qaeda and the Taliban vacating their Tribal Area camps could be a harbinger of an attack on the US?