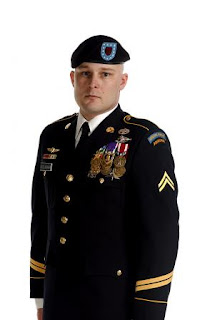 Meet former Army Corporal Richard McClanahan. The one-time medic was kicked out of the service in 2005, pulling time in the brig and receiving a less-than-honorable discharge upon his release.

According to this Air Force Times article, McClanahan got in trouble for claiming decorations he never earned, including the Congressional Medal of Honor. For what it's worth, Corporal McClanahan also claimed to have three Purple Hearts, three Silver Stars and the Legion of Merit. Army records indicate that McClanhan never received an award for valor, and his only overseas assignment was in Korea, not the Middle East.

Flash forward a couple of years, and McClanahan is in the dock again, this time on federal bank fraud charges and--you guessed it--claims that he is a Medal of Honor recipient. The FBI began investigating McClanahan after he told local residents about his impressive collection of medals, which would have made him one of the most highly-decorated soldiers in history. By comparison, fellow Texan Audie Murphy--the most-decorated U.S. service member of World War II--received two Silver Star, (and more than 30 other medals), earned in 27 months of combat service across Sicily, Italy and France.

Fortunately, the good folks of Amarillo, Texas (McClanahan's home town) weren't buying, and they called the feds. Falsely claiming that you've won the Medal of Honor is a felony, punishable by up to a year in jail. According to the Amarillo Globe-News, McClanahan was facing two counts of false claims about the receipt of military medals, and additional charges of making false statements to obtain a bank loan. Under an agreement with prosecutors, the former corporal will plead guilty to the Medal of Honor and bank fraud charges. A sentencing date has not been set.

"This is an unfortunate situation that is more common than we believe," said George Rasley, a spokesman for Texas Congressman Mac Thornberry, who also received complaints about McClanahan's medal claims, and referred them to the FBI.

What Mr. Rasley fails to mention is that such cases received little attention--and there were few prosecutions--until Texas businessman B.G. Burkett published Stolen Valor almost a decade ago. In his book, Burkett uncovered scores of "phony" Vietnam-era veterans, or former service members who claimed decorations they never received.

It's also worth noting that the first edition of Stolen Valor was self-published by Burkett; while the book eventually became a best-seller (and remains in print to this day), the major publishing houses initially took a pass on his work, claiming that "wasn't a market" for an expose on fraudulent veterans, and exaggerated claims about service members who served in Vietnam.

And, sadly enough, that indifference is a major reason that phonies like Richard McClanahan or Jesse MacBeth or Jimmy Massey can perpetuate their charades. Massey, a former Marine, claimed that his unit committed atrocities in Iraq until his lies were exposed by the St. Louis Post-Dispatch and Michelle Malkin, among others. MacBeth made similar claims--and became a poster-boy for the anti-war movement--until it was revealed that he had been discharged from the Army during basic training. However, Massey and MacBeth were clever enough to peddle their stories to reporters and activists anxious to prove misconduct among American troops--without bothering to check the veracity of their claims.

McClanahan, on the other hand, falls into the "other" category of fraudulent vet--the "hero" ready to trade his valor for personal gain. The photograph of McClanahan in the Air Force Times story shows the corporal in his full dress uniform, bedecked with a chest full of medals and devices, along with "Special Forces" and "Airborne" tabs. We'll bet that McClanahan's little fraud fooled a few people, too. It would be interesting to learn if he listed that phony Medal of Honor on that loan application, in an effort to impress the bank.

The Times doesn't explain where the image came from, but it looks like a cropped version of an "official" Army photo, usually found in personnel records. If that's the case, then it may explain how he ran afoul of the military justice system. When the photographer saw McClanahan--a corporal, on his first enlistment--with the most impressive rack of decorations this side of Matt Urban or David Hackworth--he notified superiors, and the "hero" was on his way to the brig. That scenario would also confirm our suspicions that McClanahan is a genuine idiot, willing to trade his military career for illusions of heroism and fame, based on medals he never earned.

While McClanahan deserves jail time for his deceit, he won't be the last military member to embellish his exploits for personal gain. In a society where most Americans have no connection with the armed services, it's often easy to fool the media--and members of the public--with false claims of heroism, or dark tales of atrocities, supposedly committed by our troops. For every McClanahan, MacBeth and Massey exposed as frauds, there are doubtlessly more, waiting in the wings for their moment of infamy.
Posted by Unknown at 8:44 AM

I read Stolen Valor and loved it. Learned way too much, and even remembered most of it-LOL.

The way to ID a fraud is that they talk about "Black Ops" and that they were in all of the branches of the SOF's - Navy SEAL, RECON, Green Berets, PJ's, Rangers, and any other SOF you can name.

The frauds deserve exposure and punishment. However, I think it is not against the law to claim you are an Medal of Honor recepient. It is only a crime to wear the Medal of Honor if a person hasn’t been awarded it.

Shame on any reporter who does not do the homework when interviewing these types. That Reporter will not only look foolish but lazy.

And Bravo to those reporters who expose the frauds.

I say send him to a few days at a SOF school for his punishment.

Well, if he was claiming the Legion of Merit, he hurt his case by wearing the Meritorious Service Medal where the LOM should go....

And Stolen Valor is an excellent book.

And then we have Senator Harkin representing Iowa to this day who in 1984 was exposed by Senator Goldwater as being in air combat in Vietnam which was then changed to combat missions over Cuba (?) and who finally admitted he had ferried aircraft from Japan to the Philippines. He repeated this during his short bid for the presidency in 1992. So it is obvious to me that even those in flyover country show no real distain for fraudulent claims of military valor. However as a veteran and patriotic American that does disgust me. Link: http://instapundit.com/archives/017246.php

What I find truly impressive are the combination of corporal's chevrons and "hashmarks" (i.e., service stripes each signifying three years of service) indicating he'd been in uniform for over six years.

Dear Spook, thought you and your readers would want to know that Richard David McClanahan pled guilty and faces 31 years in prison for his stolen valor and financial crimes, see the full story at http://www.amarillo.com/stories/081007/new_8196135.shtml Thank you for your service and thanks for keeping the public informed.
George Rasley
Director of Communications
Congressman Mac Thornberry (TX-13)

Debbie--The sad fact is that most reporters don't have the military background to ask the right questions AND they're too lazy to do the research. In many cases where these frauds are exposed, they've been masquerading as military heroes for years; some have even been interviewed by the media, or served as guest speakers at events covered by the press.

GeeRayz--thanks for the update. BTW, please contact me (when you have a moment) at my e-mail icspook86@hotmail.co; I'm interested in the number of complaints that Congressman Thornberry's office receives in this area. As you indicated in your comments for the Amarillo paper, it's more of a problem that people realize. I'd like to highlight that problem in future posts.

How did this document FOREVER change American and world history?
users.cis.net/coldfeet/ang22.gif
(explain block #24)

If you want to read about military fraud take a look at the biography of the 35th Surgeon General of the US Navy, Donald C. Arthur: http://en.wikipedia.org/wiki/Donald_Arthur.

This guy even looks like a turd.
REAL former US Army, Combat Medic 68W, non-purple heart, non-medal of honor but did earn my Combat Medical Badge, ARCOM,WLC Honor Graduate, AAMs and other citations/awards. OIF 06-08, OIF 09-10.

People like this McClanahan piss me off! They make the rest of us who have done tours in OIF/OEF or any other war/conflict look bad. They raise public expectations that everyone who has ever done anything is decorated to all hell. I did my job and took care of my soldiers, just like 99% of my fellow medics who served overseas with me. Yes I have PTSD, and I have injuries (NOT TO BE CONFUSED WITH WOUNDS) related to combat. Tough. I left the service and now WORK full time for a college doing veteran support work. I believe anyone who commits this level of fraud should be tried by military tribunal and serve a minimum of 10years in Guantanamo and let the Marines stationed there have fun.