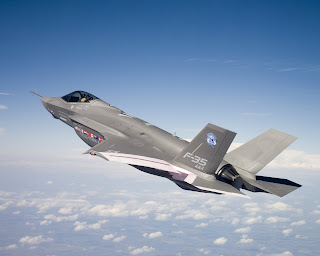 The F-35 Lightning II. Massachusetts Senator Ted Kennedy (and other members of Congress) have been earmarking millions of dollars to develop an "alternate" engine for the Joint Strike Fighter--an engine that the Air Force doesn't want (photo courtesy JSF program office)

Massachusetts Senator Ted Kennedy would never be described as a good friend of the U.S. military. But, for all his rants about Abu Ghraib and Donald Rumsfeld, the good Senator (like other members of the World's Greatest Deliberative Body), certainly knows how to bring home defense bacon.

We recall his trip to Wright-Patterson AFB, Ohio (before the last round of base closures), essentially "shopping" for programs and jobs that could be transferred to a more preferable installation, say, Hanscom AFB outside Boston. Kennedy's expedition wasn't completely successful, but it was amusing to watch the leaders of Air Force Material Command fall over themselves in hosting the Senior Senator from Massachusetts. We rather doubt that the generals and senior civilians at Wright-Pat had much affection for Teddy, but it was clear that they didn't want to wind up on his enemies list. And not surprisingly, the BRAC Commission--and the Air Force--found a way to keep Hanscom open.

Fast forward a couple of years, and Senator Kennedy has a new plan for diverting millions of defense dollars to his home state, and other parts of the U.S. At the urging of General Electric, Kenndy has been earmarking hundreds of millions of dollars to develop an "alternate" engine for the F-35 Joint Strike Fighter (JSF). Last month, CBS News reported that Kennedy has earmarked over $100 million for the engine project this year alone. So far, roughly $1.6 billion of your tax dollars have been spent on the engine, which is (you guessed it) a GE product. And coincidentally, GE's jet engine division has a plant in Lynn, Massachusetts, which (according to Kennedy) would have a stake in producing the "alternate" power plant.

There's only one problem. The Air Force doesn't want the GE engine. Pratt & Whitney has already won the engine contract for the F-35, which is being built by Lockheed Martin. By all accounts, the Pratt & Whitney powerplant is meeting--and exceeding--performance expectations. The Air Force has asked Congress to kill the "alternate engine" program for two years, and divert those billions to more worthwhile programs.

Not surprisingly, those requests have fallen on deaf ears. Senator Kennedy, along with members of the Ohio Congressional Delegation (GE also has an engine factory north of Cincinnati) keep earmarking dollars for the alternate powerplant, claiming that the project will save money, improve competition, and bolster our manufacturing base.

However, those claims are demonstrably false. As Loren Thompson of the Lexington Institute noted in a recent analytical column for UPI, the alternate engine program is nothing but defense pork. Improve competition? The engine contract has already been competed several times, and each time, the Pratt and Whitney product won. Save money? Various analyses demonstrate that adding a second supplier doesn't reduce costs, and since DoD will be the only customer for the GE engine, the alternate powerplant will actually make the F-35 more expensive.

In terms of bolstering our manufacturing base, GE is already the world's largest producer of aircraft engines, and will do just fine without the F-35 program. And, as Mr. Thompson notes, the company has no plans to actually build the "alternate engine" in Massachusetts; in fact, GE has a history of shuttering manufacturing plants in New England. So much for Kennedy's claim that the F-35 engine would bring hundreds of jobs to his home state.

Of course, serious earmark reform would end Kennedy's little sop to GE's aviation division. But fixing the earmark process is about as likely as killing the F-35 alternate engine program. The latest defense bill contained over $5 billion in earmarks, and masters of pork barrell spending--including Ted Kennedy--can always find new, creative (and expensive) ways to bring the bacon.
Posted by Unknown at 2:46 PM

Read up on the history of Westinghouse's jet engine program, and then meditate on the benefits of multiple-source procurement.

Pork? Sure; but one man's pork is another man's livelihood. Useless? Far from it.