The Grandaddy of Them All 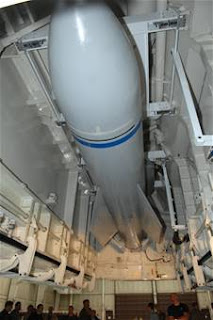 A Massive Ordnance Penetrator (MOP) simulator, mounted in a B-2 weapons trainer at Whiteman AFB, Missouri. The simulator is used to train munitions crews who will mount operational versions of the weapon in the B-2. MOP is the world's largest conventional weapon, designed for deeply-buried targets (USAF photo courtesy of Lt Col Bob Dulong)

Here's a little heads-up for Osama bin Laden, Mahmoud Ahmadeinjad, Kim Jong-il and other tyrants who like to hide in caves and bunkers, supposedly beyond the reach of "conventional" bombs and similar weapons. The next time you climb into your favorite cavern or underground rumpus room, remember: you're not as safe as you might think.
That's because MOP--the USAF's Massive Ordnance Penetrator (MOP)--has taken another step toward reality.
A week before Christmas, a team at Whiteman AFB, Missouri (home of the B-2) loaded a 700-lb mock-up of the new bomb into a stealth bomber weapons load trainer. The mock-up is used by munitions crews that will load the real MOP into the B-2.
Needless to say, MOP will be the world's largest conventional weapon, and the photo at the top of this post gives you some idea of its massive size. But, in case you're wondering, here are the bomb's official numbers, from a Whiteman press release:
"The MOP is approximately 20.5 feet long, with a 31.5-inch diameter and a total weight of slightly less than 30,000 pounds. The weapon will carry over 5,300 pounds of explosive material and will deliver more than 10 times the explosive power of its predecessor, the BLU-109. It is designed to penetrate up to 200 feet underground before exploding."
Work on MOP began in 2004, and integration with the B-2 has been underway since last summer. The stealth bomber will be able to carry two of the weapons, which are guided by GPS. While MOP has never been a "black" program (as far as we can tell) it wasn't widely publicized until this year, when the Russians announced they had developed a new bomb that was four times more powerful than the U.S. BLU-82, long regarded as the "ultimate" conventional weapon.
Russia claims their new weapon can be delivered from a TU-160 Blackjack bomber, but footage of its first test--conducted last summer--never showed the bomber (and the bomb) in the same frame. There is speculation that the Russian weapon (nicknamed the "Father of All Bombs") is an out-sized weapon, similar to the BLU-82, which can only be dropped from the cargo bay of a transport aircraft. Additionally, the Russian bomb does not appear to be a penetrating weapon, unlike the MOP, which is intended for deeply-buried targets.
Posted by Unknown at 10:39 AM

Labels: B-2, Father of All Bombs, MOP, Whiteman AFB

Holy kinetic strike! I think just the THUMP of this sucker hitting the ground would shake up the (recently, to be) dead. Makes me think of Tennessee Ernie Ford's "16 tons" (paraphrased.....)

What I find strange is the practice with a full size mock-up that only weighs 2% of the real deal. Seems to me that's inviting some small complacency. The mass/momentum of 15 tons is a whole lot greater than 1/3 ton. (I was avionics not ordnance so y'all bomb bashers correct me on this)

Joe--As you may know, there's more than a little irony in your selection of Ernie Ford's classic for your updated lyrics. The old "pea picker" was a bombardier on a B-29 crew, and flew combat missions over Japan during World War II.

Ford's pilot was a young lieutenant named Russell Dougherty who later became Commander of Strategic Air Command. Dougherty trusted his bombardier and asked him to assemble a crew among the replacements who were arriving at their base near Guam. Dougherty assumed that Ford would ask the crew members about their training and qualifications, but Ford had another idea. "Everyone from Tennessee, come over here." So, Dougherty wound up with a crew that was heavily weighted toward Ford's home state. Mr. Ford and General Dougherty remained life-long friends.

Unknown said...
This comment has been removed by the author.
2:47 PM