How Green is Their Hypocrisy, Redux 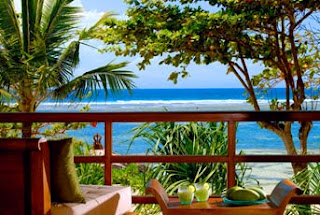 After a day of saving the planet, delegates to the U.N. Climate Change Conference in Bali can retire to the ocean-side suites, like this one at the Westin Nusa Dua Resort, where British officials are staying. Westin advertises a stay at the luxury resort as "sheer indulgence." (Westin photo).

We recently noted that many of the world officials and environmentalists attending the U.N. Conference on Climate Change in Bali will travel to the meeting on private jets. You don't need to be a member of the Sierra Club to figure out that their collective excursion will generate quite a carbon footprint, providing yet another example of "green" hypocrisy.

Of course, the extent of their hypocrisy didn't become clear until we stumbled across this article in the U.K. Telegraph. Reporter Charles Clover ran the numbers, and provides this startling statistic:

Around 15,000 politicians, civil servants, green and industry lobbyists and journalists will fly in for the summit, emitting the estimated equivalent of more than 100,000 tons of carbon dioxide - on a par with the annual emissions of the African state of Chad.

And predictably, the environmentalists can't decide how to offset their massive carbon footprint:

The Indonesian government which is hosting the talks is understood to favour a programme to plant thousands of trees.

But Britain and the UN's own climate change experts have rejected tree planting to balance the carbon footprint of their delegates.They believe it is difficult to calculate how much carbon trees absorb, verify how many are cut down or calculate how many release carbon into the atmosphere through decay in subsequent years

John Hay, spokesman for the UN conference organisers in Bali, said: "The Indonesian government will be announcing its offsetting deal on Wednesday. It will involve tree-planting but how exactly, where and when will be announced then. We at the UN climate secretariat are offsetting by buying emission reductions under the Clean Development Mechanism. Then it is up to the individual delegates and journalists. The responsibility lies with them."

After the daily grind of saving the earth (and figuring out the appropriate tree-planting scheme), delegates will relax in some very posh accomodations:

Hotels, many of which fall into the bracket of some of the most luxurious in the world, have spotted the chance to charge accordingly, with many saying accommodation is only available now at around £400 to £500 a night for a small single room.

The hotel where British ministers will stay, the Westin Resort Nusa Dua, describes the experience of staying there as "sheer indulgence."

Hilary Benn, the environment secretary, Phil Woolas, junior environment minister, and Gareth Thomas, the junior minister for international development will each have £330-a-night suites around the hotel's "free form" pool, with their own teak-floored bedroom, living room and dining room.

Government spokesmen justify the expense because ministers will need to hold private meetings at all hours.

While we haven't (yet) found a complete list of Congressmen, Senators and other U.S. officials who plan to attend the conference, it's a safe bet that their digs will be just as nice. A recent MSNBC article reported that California Senator Barbara Boxer will be in Bali, along with Governor Arnold Schwarzenegger and some of the A-List environmental celebs (Al Gore, Leonardo DiCaprio). Ms. Boxer recently scheduled a Senate vote on a bill, requiring a 70% reduction in environmental emissions by mid-century. With her trip to Bali on the taxpayer's dime, it's clear that Ms. Boxer has no plans to practice what she preaches, or hopes to mandate.