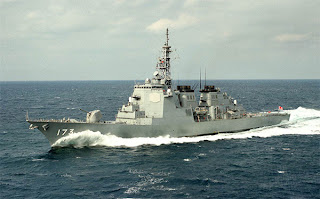 The Japanese Maritime Self-Defense Force (JMSDF) destroyer Kongou. Equipped with the Aegis radar system and SM-3 missiles, the Kongou conducted the first successful intercept of a ballistic missile by a non-U.S. ship, in a test off Hawaii on 17 December. The Kongou is the first of four Japanese destroyers to be outfitted for ballistic missile defense (military-today.com photo).

In a test conducted off Hawaii, the Japanese Navy destroyer Kongou successfully shot down a mock ballistic missile in space, using a U.S.-made SM-3 interceptor missile. The event marked the first time that an allied naval vessel has intercepted--and destroyed--a ballistic missile target. The Kongou and three other Japanese destroyers are equipped with the Aegis radar system and SM-3 missiles that are also found on U.S. vessels. The radar allows the vessel to track missile targets at long ranges and destroy them at high altitude, using the SM-3.

"In the test, implemented in cooperation with the U.S. Navy, a mid-range ballistic missile was launched from a U.S. military range on Kauai Island at 12:05 p.m. (Hawaii Time). The [Japanese] Maritime Self Defense Force's Kongou, sailing in waters several hundred kilometers away, detected it and fired an SM-3 about four minutes later.

About three minutes later, the interceptor reached an altitude of more than 100 km in space and destroyed the target, according to officials.

The Kongou and its sister ships are slated to receive the SM-3 and other missile defense upgrades by 2010. With those capabilities, the destroyers will form the upper tier of Japan's missile defense system, engaging targets at long range and high altitude. Land-based Patriot missile batteries form the lower tier of the anti-missile shield, providing point defense of high-value targets.

Yesterday's test--and the destroyer upgrade--are more evidence of how seriously Tokyo views the missile threat from its neighbors, China and North Korea. The Japanese cabinet decided to enter the U.S. missile shield program in 2003, after Pyongyang and Beijing fielded new, longer-range systems capable of striking targets throughout Japan. Plans to modify the destroyers for missile defense were actually accelerated, after North Korea conducted another round of missile tests in 2006.

Japan is also upgrading its Patriot batteries to the new PAC-3 standard, enhancing their ability to intercept ballistic missiles. At least two PAC-3 batteries have already been deployed, and nine other air bases will receive the new missiles by 2010.

Ironically, the successful Japanese test comes as U.S. missile defense programs face an uncertain future. As we've detailed in previous posts, Congressional Democrats (led by Senator Levin) are attempting to gut missile defense efforts, claiming that such programs are "destablizing" and the technology is unproven.

Such arguments ring hollow. Someone should ask Mr. Levin and his colleagues what is more destablizing: Japan defending itself against missile attack, or Pyongyang and Beijing fielding new generations of missiles, each more capable of reaching targets at longer range, and much more accurately than in the past. Those developments underscore the wisdom and far-sightedness of Japan's missile defense program. Sadly, Senator Levin (and other Congressional Democrats) are obviously lacking in those qualities.

If the Democrats take over and gut our national defense we may see...

Could Japan and potentially the EU take over the program??? Iranian missiles are a lot closer to Europe than America, eh...

Booghie--Rather doubtful; the Europeans with the technical ability to make a meaningful contribution (Germany, Britian, France, Italy) are tepid on BMD, at best. And, without firm U.S. support, the Europeans that plan to host BMD facilities would probably cave to Russian pressure.

On the other side of the world, Japan is committed to BMD, due to the threat from China and North Korea. However, the systems they're using are U.S. made., so it would take significant technology transfer/licensing agreements to grant manufacturing and R&D authority to Japan.

However, the real bottom line is that Japan (like other allies) relies heavily on the U.S., through our mutual defense pact. One reason that Japan selected the Aegis system is that its DDGs can share data with U.S. vessels that have the same capabilities; in other words, the Japanese expect that the "sea leg" of its missile shield will include U.S. as well as MSDF vessels.

As with the Europeans, if the U.S. ever caves on BMD, the Japanese would find it virtually impossible to "go it alone."

I believe the ship's name is generally rendered as "Kongo" in English, not "Kongou."

Not sure that is completely accurate. The Dutch and Spanish have partisipated in AEGIS testing in the past, so there is a European flavor to it.

What amazes me is how cuts occur within the MDA. For the most part, when Congress cuts funding for the MDA, the MDA cuts programs that are largely doing well, like AEGIS BMD funding and the KEI program, but they still bury huge sums into the ABL.

It doesn't make any sense. AEGIS is a perfect example. The MDA has cut funding for the Navy, only to see the Navy fund it with their own budget. Why? AEGIS BMD works.

Any agency that throws its money at "pie in the sky" and cuts funding for "functional and operational" should at minimum be forced to explain itself. Fat chance with this Congress.

Funny, when I first read the name of this Japanese ship, my first thought was of H.I.J.M.S.Kongo, the old battleship USS Sealion put on the bottom so long ago.

The missile technology has great spin-off application for space travel too.

It would be nice if the Democrat would join the the team (The Republic) and then we can put the squabbling behind us and advance -
mine the moon, the asteroid belt and mars etc. It seems like some would rather ride bicycles and remain with the donkey cart then advance to the stars the way they are going.

I have to go have a bit of a think about the Grand Unified Theory of everything that Al Einstein was working on and how it can be applied as solution to help get us unuted more.