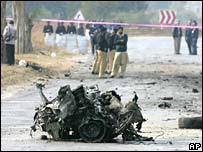 Remnants of the car used in yesterday's suicide bombing against a bus carrying the children of Pakistani Air Force personnel, assigned to the Karma weapons complex. The Karma facility is believed associated with Pakistan's nuclear weapons complex; the attack was the second near a Pakistani nuclear site in the past two months. raising new concerns about terrorist intentions and facility security (AP photo via The Long War Journal)

A hat tip to the ever-vigilant Bill Roggio, who was among the first to recognize this disturbing trend among recent terrorist attacks in Pakistan. Since 1 November, insurgents have staged at least two strikes at facilities associated with the Pakistan's nuclear program. The latest attack, which occurred yesterday, targeted a bus carrying the children of Pakistani Air Force personnel. According to AFP, a suicide car bomber plowed into a bus in Karma (about 60 kilometers northwest of Islamabad, killing the terrorist and wounding five children and three adults on the bus.
It would be easy to dismiss the attack in Karma as a pure terror strike, designed to frighten Pakistani military personnel and make them re-think their support for the government. But Mr. Roggio found some insightful information at GlobalSecurity.org, which highlight the importance of the Karma complex:
The Wah Cantonment Ordnance Complex consists of three nearby armament facilities in Wah (Pakistan Ordnance Factories - POF), Kamra (Air Weapon Complex - AWC), and Taxilia (Heavy Industries Taxila -HIT). One or more of these facilities is probably associated with the weaponization of Pakistan's nuclear devices. According to some reports, the main storage and maintenance site of the Pakistani nuclear weapons, particularly the weapons at a 'screwdriver level', is located at the 'ordnance complex' in Wah.
The Air Weapon Complex at Kamra is devoted to air-to-surface munitions, among other activities, and would probably have at least some connection with the development of air-delivered nuclear weapons. ... The Pakistan Aeronautical Complex (PAC) was almost certainly responsible for the modification of Pakistani aircraft, probably including F-16 fighters, to a configuration capable of delivering air-dropped nuclear weapons.
From our own experience, we can confirm that the AWC is actively involved in Pakistan's nuclear program. And, as evidenced by the GlobalSecurity.org report, you don't need an intel background to learn the mission of the Air Weapons Complex, or its probable ties to Islamabad's nuclear efforts. That information is readily available on the internet, and is almost certainly known to Pakistan's Al-Qaida-linked terrorists.
The attack at Karma came barely a month after a similar strike at Sargodha Air Base, located west-northwest of Lahore. In that attack, which occurred on 1 November, a suicide bomber killed eight people outside the base perimeter, targeting a bus which was carrying Air Force personnel to a nearby training center.
Like the AWC complex at Karma, Sargodha is also closely linked to Pakistan's nuclear program. The base houses two squadrons of F-16 fighters, which have reportedly been modified for a nuclear strike mission. Additionally, as many as 80 solid-fueled, nuclear-capable Hataf/M-11 short-range missiles are believed to be stored at the Central Ammunition Depot on Kirana Hills in Sargodha. The ammunition depot is believed to hold nuclear weapons for both the F-16s and the missiles.
Some analysts intially believed the Sargodha attack was in retaliation for F-16 strikes against terrorist targets in Pakistan's western tribal lands--and that may have been a motivating factor. But the more recent strike in Karma casts both events in a slightly different light; while militants have a score to settle with Pakistan's military, suicide attacks outside two key nuclear facilities--barely a month apart--are more than a mere coincidence. The strikes were likely aimed at testing perimeter security, along with inflicting casualties and fear among military personnel and their families.
After staging successful, high-profile attacks near two of Pakistan's major nuclear sites, the terrorists may set their sights on more spectacular operations, by attempting to penetrate key bases and the facilities they house. Obviously, that sort of operation would represent a quantum leap for the insurgents; it would take far more personnel--and firepower--to execute that sort of attack. Pakistan's nuclear facilities, like those in other countries, have multiple layers of security and access is strictly controlled.
Still, that sort of bold strike is not out of the question. The Singapore-based International Centre for Political Violence and Terrorism Research (PVTR) recently noted that despite its nuclear mission, Sargodha had less security than other Pakistan Air Force (PAF) bases, apparently due to its location in the middle of the country. According to the PVTR, Pakistan apparently viewed Sargodha as "out of the reach" of militants. That perception likely changed in early November.
Over the past three months, Taliban terrorist elements have struck three key military targets in Pakistan: Karma, Sargodha and the garrison city of Rawalpindi, which was attacked in early September. Those strikes underscore the ability of insurgents to operate throughout Pakistan, and carry out bombings near supposedly secure facilities.
Now, the question is: do the terrorists want to up the ante and attempt larger-scale operations, possibly aimed at penetrating a military base that supports Pakistan's nuclear program? While they have little chance of storming a weapons storage facility and hauling away a nuke, a bloody attack against a nuclear base would further embarass the Musharraf government, and raise new concerns about his ability to secure the country--and safeguard Pakistan's weapons stockpile.
Posted by Unknown at 9:10 AM