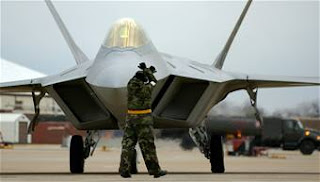 An F-22 Raptor on the ramp at Langley AFB, VA (USAF photo)

According to a press release from Air Combat Command, the active-duty 1st Fighter Wing and the 192nd Fighter Wing of the Virginia Air National Guard, have "fulfilled all performance and operational requirements and that the entire program — including the aircraft, pilots and maintenance crews — is ready for all operations, including war deployments." Both units are stationed at Langley AFB, in the city of Hampton.

The announcement comes at a critical time for the Air Force's air dominance mission. Due to rising costs (and the fiscal demands of the War on Terror), the Pentagon has slashed its acquisition plans for the F-22 Raptor. Currently, DoD plans to buy only 183 of the fifth-generation fighters, while the Air Force would prefer to double that number, citing the potential threat from advanced Russian and Chinese aircraft.

Without a larger Air Force "buy," Lockheed-Martin will end production of the F-22 in 2011. Members of the Georgia Congressional delegation are lobbying for the purchase of more Raptors, hoping to preserve 2,000 jobs at the Lockheed-Martin plant in Marietta, where the fighters are assembled.

Ironically, efforts to buy more F-22s may have received an inadvertent boost from on-going problems with the Air Force's fleet of older F-15 air superiority fighters. More than 400 F-15 A-D models have been grounded three times since early November, after a structural failure caused the crash of a Missouri ANG "Eagle." Most of the F-15s in question are at least 25 years old, and fixing the older jets may be expensive, particularly if the repairs will provide only a few more years of service life.

The F-15 grounding has also created major operational headaches for the Air Force. Other jets --notably the F-16--are performing missions normally handled by Eagle squadrons, increasing maintenance costs for those units. In other cases, the U.S. asked Canadian Air Force (CAF) F-18s to pull some of the air defense missions assigned to F-15s, and the Eagle air defense mission in Alaska is temporarily in the hands of newly-arrived F-22s.

Against that backdrop, attainment of FOC by the Langley Raptors couldn't come at a better time. The two squadrons of F-22s assigned at the base already have a busy operational schedule, and that itinerary could become more crowded in the coming months, particularly if the F-15s remain grounded.

A total of 40 F-22s are currently based at Langley. The aircraft are part of the 27th and 71st Fighter Squadrons, part of the 1st Wing. Members of the 192nd--an associate wing--fly and maintain Raptors that are technically "assigned" to the active duty units.
Posted by George Smiley at 9:06 AM