A Slap on the Wrist 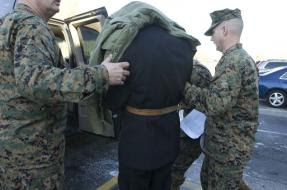 Former Navy Lieutenant Commander (Chaplain) John T.M. Lee, his face covered, is led away after sentencing last week. Under a plea deal, Lee will spend the next 19 months in the brig, for his conviction on charges of sexual misconduct with several men, including Naval Academy midshipmen and an Air Force officer (Navy Times photo)

An HIV-positive Navy Chaplain (and Roman Catholic Priest) was sentenced last week to no more than two years in the brig, on charges of sexual misconduct with a number of men, including an enlisted Marine, two Naval Academy midshipmen and an Air Force officer. Navy Times summarizes the charges against Lieutenant Commander John Thomas Matthew Lee:

Lee admitted to coercing a midshipman — who is now an ensign — into having sexual relations with him, convincing a Marine corporal to take nude photographs of him during a counseling session, and to knowingly exposing an Air Force lieutenant colonel to the HIV virus after he met that man on the Internet. The relationship with the second midshipman — who is also now an ensign — was consensual, and the two lived together.

But Lee, who could have faced a life sentence without the possibility of parole if the case had gone to trial, had all but two years of his sentence suspended under the terms of a plea agreement, which was negotiated in the weeks before Lee’s general court-martial.

With time for good behavior, Lee, 42, will serve about 19 months in a military brig, defense attorney David Sheldon said after the hearing.

The military judge in the case, Colonel Steven Day, had recommended that Lee serve 12 years in prison. But a plea deal suspended all but two years of the former Chaplain's sentence. The agreement was worked out in the days prior to Lee's general courts-martial, which convened last week. Colonel Day did order Lee's dismissal from the Navy, meaning he won't collect a pension when he emerges from the brig in 2009.

Still, there are a number of disturbing aspects in this case. First, Lee's promiscuous (and predatory) ways became his early ticket out of jail; in exchange for a reduced sentence, the former navy officer agreed to provide information on other men he might have infected, allowing health officials to notify them. Without the plea deal, Lee might have faced life in prison. We wonder why Navy JAGs didn't use that threat to get the names of Lee's other partners--and force him to serve a longer prison term, in line with Colonel Day's recommendations.

Then, there's the little matter of fraudulent enlistment. According to the Baltimore Sun, Lee was commissioned into the Navy in 1988, before "Don't Ask, Don't Tell" became a part of the military lexicon. Back in those days, it was illegal for gays to join the military, or lie about their orientation in order to enlist. By those standards--which were in force when Lee entered the Navy two decades ago--he is guilty of fraudulent enlistment. That should bring extra time in the brig and forfeiture of pay and allowances during that period.

Finally, the Sun reports that Chaplain Lee served with a number of Navy and Marine Corps units during his career. And, judging from testimony at the hearing last week, it seems clear that Lee routinely used his position to have sex with other men, even when it wasn't consensual.

We can only wonder how many sailors and Marines were victimized by Lee through the years, and if earlier complaints against him were ignored or covered up by the chain of command. Incidentally, it was an accusation by a former enlisted Marine--who was forced to take nude pictures of Lee during a "counseling" session--that triggered the investigation that finally led to the Chaplain's conviction.

Still, 19 months in the brig is a veritable slap on the wrist for Lieutenant Commander Lee. For flagrantly disobeying a host of military regulations--and willingly exposing his "partners" to the HIV virus, Lee deserves to spend the rest of his life in prison. That might send to message to the other predators in the ranks. Instead, Lee and his attorneys have provided an effective strategy for military members facing similar charges in the future; hang tough and refuse to name your partners until the JAG cuts a deal.

Less than a month before Lee was sentenced, another former Naval Academy staffer, Commander (Dr.) Kevin Ronan received a 46-month prison term for secretly recording midshipmen having sex at his Annapolis-area home. Ronan, a former medical officer at the academy, hosted about a dozen midshipmen at his home on weekends and during other free time as part of the institution's "sponsor" program.

Commander's Ronan's crimes were bad enough, but there's no evidence that he actually had sex with midshipmen at his home--a stark contrast to the charges brought against Lee . Yet, the former Chaplain will spend only half as much time in jail, despite the fact that he seduced two "mids" and willingly exposed them to HIV.

If the Navy--and other branches of the armed services--are serious about getting rid of predators in their midst, then the punishment should fit the crime, fairly and consistently. Chaplain Lee's sentence is an absolute farce. Somewhere out there, the predators are smiling.

***
ADDENDUM: We wondering how the Air Force will handle the case of that Lieutenant Colonel who was exposed to the HIV virus through his relationship with Lee. Given his rank and years of service, it's quite possible that the Air Force officer also entered the military before "Don't Ask, Don't Tell." Seems to us that the Lieutenant Colonel might also be charged with fraudulent enlistment and conduct unbecoming, among other offenses.
Posted by George Smiley at 9:32 AM