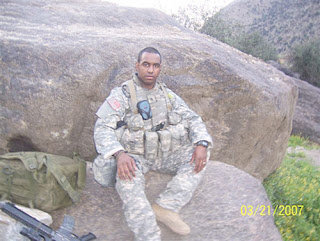 Sgt Jose Rivas, a U.S. Army medic who won the Silver Star for heroism under fire in Afghanistan earlier this year. The award narratives for Sgt Rivas--and two other Sliver Star recipients--has touched off a public relations battle between the Army and media outlets (Army photo via the Baltimore Sun)

When it comes to military public relations, the U.S. Marine Corps inevitably wins the top prize, while the other services get middling grades, at best. For the Army, Navy and Air Force, every p.r. success is usually followed by some sort of debacle, many of them self-inflicted.

Consider the "battle" that the Army has been fighting for more than a year with the Baltimore Sun. For more than a year, the service has blocked requests by the Sun (and other media outlets) to obtain narratives for military personnel who receive awards for heroism. Army lawyers and bureaucrats say that release of the medal narratives would pose a potential threat to the soldiers' privacy and safety.

Captain Sean McQuade disagrees. He received the Silver Star for valor under fire in Afghanistan earlier this year. As a platoon leader in the 10th Mountain Division, McQuade (then a First Lieutenant) led his unit on a search for a local Al Qaida operative, Habib Jan, in the mountains of eastern Afghanistan. On a clear night last spring, McQuade and his men found Jan, triggering a pitched, 17-hour battle with insurgents. The Americans were outnumbered; 27 members of McQuade's platoon against Jan and 90-100 of his fighters.

From interviews with soldiers, an Army account that has been released, and medal narratives provided unofficially by Captain McQuade, the Sun's David Wood pieced together details of the battle--and stories of individual heroism.

For 17 hours, the American platoon was pinned down. Bullets snapped and hissed as the enemy slowly closed in. Ammunition ran low. Water ran out. Sniper rounds plucked at the soldiers' helmets and sleeves and drilled through boots as they shifted and returned fire. Night stretched into day and on into night again and the fighting intensified

As Habib Jan's men volleyed machine gun fire and rockets down on the platoon, an Afghan soldier under McQuade's command was struck in the thigh. Medic Jose Rivas, a sergeant from New York City, dragged the wounded man inside a low adobe building and began working to save him as enemy sniper rounds ricocheted around the room.

Rivas quickly realized that the man would die without surgery, and McQuade, assessing his various predicaments, agreed. McQuade kept 20 men to hold off al-Qaida and dispatched 12 others to carry and protect the wounded Afghan.

For three hours, Habib Jan's men tried to kill them as the team struggled downhill, dashing from rock to rock and shooting back as best as they could.At one point Rivas halted to run IVs into the dying man to boost his falling blood pressure.

While bullets thudded around them, Rivas sheltered the Afghan soldier with his body, and soldiers held the IV bags.Then they picked him up and zigzagged on through the sleet of fire. When another man went down injured, Rivas crawled back to give aid - as bullets struck the sand, gravel and rock around him.

As dusk fell, fire from the slopes above the American position grew hotter and rounds began striking into corners previously thought safe. Fresh al-Qaida fighters were pouring over the border from Pakistan to join Habib Jan's fighters.

McQuade's men could see the enemy's muzzle flashes as they fired, and they spotted a sniper in a cave across the narrow valley. They brought up a couple of Viper anti-tank missiles and destroyed the position in a ball of fire, bringing cheers.But the fight wore on.

"We're just getting hammered," McQuade radioed. Reinforcements are on their way, he was told, but it would take hours.

As McQuade's men fought for their lives, the Army sprang to help. From fire bases down the valley and miles away, 105 mm and 155 mm howitzers and 120 mm mortars opened up, detonating heavy shells on enemy positions identified by McQuade's spotters. Air Force A-10 Warthogs and three Apache helicopter gunships joined the fight, vectored onto their targets by [Staff Sergeant Christian] Bryant, working his radio under heavy fire.

"I've got all the assets in our half of the country," crowed McQuade.

A B-1 bomber swooped in, dropping a bomb, as directed, so close that the concussion blew several cheering troopers off their feet.

But it wasn't until well after dark that an AC-130 gunship arrived to pour deadly fire on the enemy. One by one, the enemy guns went quiet.

In addition to Captain McQuade, Sergeant Rivas and Staff Sergeant Bryant also won the Silver Star for their actions that day. They returned from Afghanistan this summer, and received their medals at a ceremony last month.

We should note that the personal accounts obtained by the Sun were unclassfied. Ditto for the Silver Star narratives provided by Captain McQuade. So, why has the Army refused to officially release those documents? Along with privacy and security concerns, the service also claimed that a DoD directive specifically prohibited release of the narratives. But a Pentagon spokesman told the Sun that there is no prohibition on the release of valor decoration narratives.

The Army's concerns about privacy also ring a bit hollow. As anyone who's read a small-town newspaper knows, the Pentagon routinely releases the names and hometowns of military personnel who receive decorations, including those awarded for heroism. If DoD was concerned about disclosing the names its personnel (and where they lived), then it wouldn't crank out the hundreds of news releases that appear in papers across the country each week.

Instead, be believe the Army's reluctance to release the narratives stems from the location of the battle. Note the reference to "fresh Al Qaida fighters pouring over the border from Pakistan." That indicates the engagement occurred along the poorly-marked Afghanistan-Pakistan border; there is the very real possibility that portions of the battle--if not the entire firefight--took place on Pakistani soil.

And that raises a real problem for the Pentagon. Officially, U.S. forces don't operate inside Pakistan, a soverign nation and an important ally in the War on Terror. Unofficially, Predator drones have conducted strikes on high value Al Qaida and Taliban targets on the Pak side of the border, though the Pentagon typically claims that the attacks were the work of Pakistani forces. There are also reports that U.S. SOF teams range across the border, in pursuit of similar targets.

Obviously, the Army doesn't want to disclose that the battle might have occurred on the "wrong" side of the border. And, we'll venture that the Sun's interest in the exploits of McQuade's platoon go beyond a story of genuine heroism. Mr. Wood and his colleagues may be working on stories about U.S. operations in Pakistani territory, and believe the medal narratives may shed new light on that topic. Forgive our suspicions, but most MSM outlets haven't been particularly anxious to print or broadcast "good news" stories from Iraq or Afghanistan. We wonder if the Sun would have similar interest had the battle occurred deep in Afghan territory.

Still, that doesn't completely excuse the Army's clumsy handling of this matter. Judging from the narratives provided by Captain McQuade, there doesn't appear to be anything classified in those documents. And, we agree with McQuade that the story of his platoon's actions that day need to be told.

However, we don't agree with the proposal of Colorado Democratic John Congressman, who wants to create a public database of military valor awards. Many of those documents are already accessible. Google the name of any Congressioal Medal of Honor recipient, and you can usually find most--if not all--of the narrative that accompanied the award.

Fixing this problem doesn't warrant a new database. Instead, what we need are public affairs officers, JAGs and other military bureaucrats that are both p.r. savvy and security conscious. There's no reason that the stories of Captain McQuade and his men can't be told in greater detail, without significant risks to national security.

And in case you're wondering, U.S. forces met their objective that day.

Directed by McQuade's exhausted but jubilant men that night in Afghanistan, the AC-130 gunship followed a trail down the valley and came upon a group of six men fleeing the battlefield. After ensuring that no friendlies were nearby, the gunship opened up. The next day McQuade and his men had a look at the bodies.

This is what it probably looked like as "Spooky" finished the job. 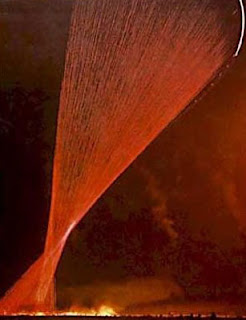 The Colorado Congressman is John Salazar, brother to Colorado Senator Ken Salazar. Both are Democrats, and neither has any love for the military.