Blowing Away the Threat 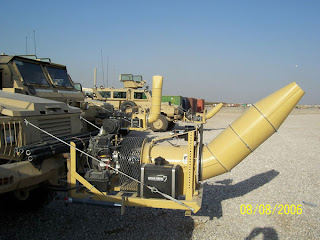 A vehicle-mounted Cyclone blower, used to expose trash and other debris that hide IEDs in Iraq; more than 100 are currently in service with U.S. forces in Iraq (Buffalo Turbine photo via the Milwaukee Journal-Sentinel).

In the long struggle against IEDs in Iraq, it has often been said that there won't be a single, "magic bullet" solution that solves the problem, once and for all.
Instead, dealing with that threat has required a variety of tactics and technologies, incorporating everything from dismounted troops, to super-sized debris sweepers.
That's right, debris sweepers. The same devices used to blow away trash at football stadiums, race tracks, public parks and on city streets is now being employed to expose roadside bombs in Iraq, with considerable success.
A recent article in the Milwaukee Journal-Sentinel details the effort. A couple of years ago, with IED attacks on the rise, former soldiers working for an equipment manufacturer wondered why a modified blower couldn't be used to expose IEDs, which are often concealed beneath piles of trash and other debris.
Buffalo Turbine, a Springville, New York firm, stepped up to the challenge, producing a vehicle-mounted blower (aptly named the Cyclone) that could direct a powerful blast of air at roadside trash piles and other suspicious debris. Powered by Kohler engines (built in Wisconsin), the Cyclone can generate a hurricane-force torrent of air, reaching speeds of 180 mph. That force is more than sufficient to blow away trash or debris hiding IEDs, and sometimes, actually detonate the device.
According to the manufacturer, the Cyclone has uncovered "dozens" of IEDs in Iraq. The military has over 100 of the blowers in service and more are on the way. Countless lives have been saved by the Cyclone, and no soldiers have been injured while using the device. In fact, the vehicle-mounted blower has been so effective that Cyclones now lead many convoys in Iraq.
Development and deployment of the blower system reminds us that some of the best military innovations come from outside the R&D community. For a fraction of the billions spent (so far) on IED jammers and robots, the Cyclone has proven to be a highly effective counter-measure, using the same technology found in leaf blowers found at your hardware store.
The Cyclone story reminds us of another "low-tech" solution to a vexing military problem during World War II. As Allied forces advanced slowly through Normandy, armored units suffered horrendous losses from the thick "hedgerows" that bordered the region's many fields. Most of the hedgerows were too dense to simply punch through and rolling over the top exposed the tank's thin "belly" armor to enemy anti-tank fire.
The losses continued until a maintenance NCO developed a simple "hedge chopper" fashioned from scrap metal. Mounted on the front of a Sherman tank, the chopper allowed tank crews to slice through a hedgerow quickly, often surprising German defenders on the other side. Development of the chopper took a few hours, some scrap steel, a welding torch, and some old-fashioned American ingenuity. For his efforts, the Sergeant received the Distinguished Service Cross--and the gratitude of Sherman crews that no longer had to "climb over" hedgerows.
Posted by Unknown at 12:18 PM